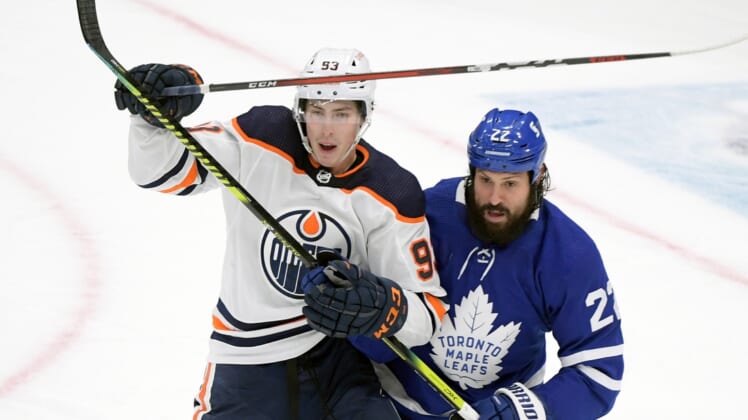 As if losing Wednesday night wasn’t bad enough for the Toronto Maple Leafs, the fallout was just as ugly.

Not only did forward Joe Thornton leave early in the third period of their 3-1 loss to the Edmonton Oilers, but Auston Matthews didn’t practice the next day and his status is iffy for Friday night’s home rematch with the Oilers.

“He wasn’t feeling great coming off (Wednesday’s game),” coach Sheldon Keefe said of Matthews. “He just took the rest of the day off and we’ll see how he feels in the morning.”

Matthews was on the ice with teammates prior to the practice, but he left just before they began completing drills. Any extended absence would be a big hit for Toronto. In Wednesday’s game, Matthews was his team’s best player, not just in registering the lone goal but also netting a half-dozen shots on net.

Keefe was a bit more forthright about Thornton, who suffered an apparent wrist injury in a collision with Josh Archibald, noting that it is not a day-to-day injury.

“Looks like he’s definitely going to miss some time here with us, but we don’t know the extent of it,” Keefe said. “He’s going to have to get more tests and images and stuff like that later this week. That’s how it goes sometimes.”

Toronto Maple Leafs looking to get back on track

After suffering a loss that snapped a two-game winning streak, the Leafs will look to overcome an Oilers team that was dedicated to defense in their first meeting of this two-game set, although it meant a game lacking entertainment despite the high-level players on both sides. That said, beauty is in the eye of the beholder.

“It’s almost funny to me how everybody talked all summer about ‘Toronto and Edmonton have to defend better,’ and then, ‘Toronto and Edmonton actually defend well,’ and now they think it’s a bad hockey game,” Oilers coach Dave Tippett said. “It just baffles me sometimes hearing what’s going on.”

“Sometimes the boring games are the most solid,” added Oilers forward Leon Draisaitl, whose third-period goal was the game winner. “That’s a huge win and more the way that we want to play.”

The Oilers have been rightfully knocked for their porous defensive play over past years, but the win came with an effort that featured everyone adhering to the quest to keep the puck out of their net.

“The boys were blocking shots everywhere, it was really good to see,” said Kailer Yamamoto of his team’s 19 blocks on the night. “The defense were laying their bodies on the line. If we do that every night, we can be a really good team.”

The Maple Leafs, on the other hand, are expecting more of themselves, and aren’t talking about providing a more entertaining affair. Their level of intensity is expected to be elevated a notch or two.

“Strange game,” said Keefe, who said his players appeared “disconnected.” “It was the first game you felt like it was a game with no fans in it. Really quiet, slow-paced game. First period was tough to get through.”

That said, both teams were truly focused on goal prevention, which has a better long-term impact.

“I saw two teams that definitely locked it down defensively,” explained Toronto goalie Frederik Andersen, who faced only 21 shots on Wednesday. “A couple of bounces, it could’ve gone the other way.”