The San Francisco 49ers shocked the football world on Thursday by making Jimmy Garoppolo the highest-paid player in the history of the National Football League. After just seven career starts (five with the 49ers), the former New England Patriots second-round pick signed a five-year, $137.5 million extension with $74 million in total guarantees. His $27.5 million annual salary is the highest in NFL history.

Needless to say, this deal is going to have wide-ranging ramifications around the NFL moving forward. That was evidenced by the insane hot takes on social media after reports of the deal broke. Here are some takeaways from the shocking contract.

49ers did what they needed to do 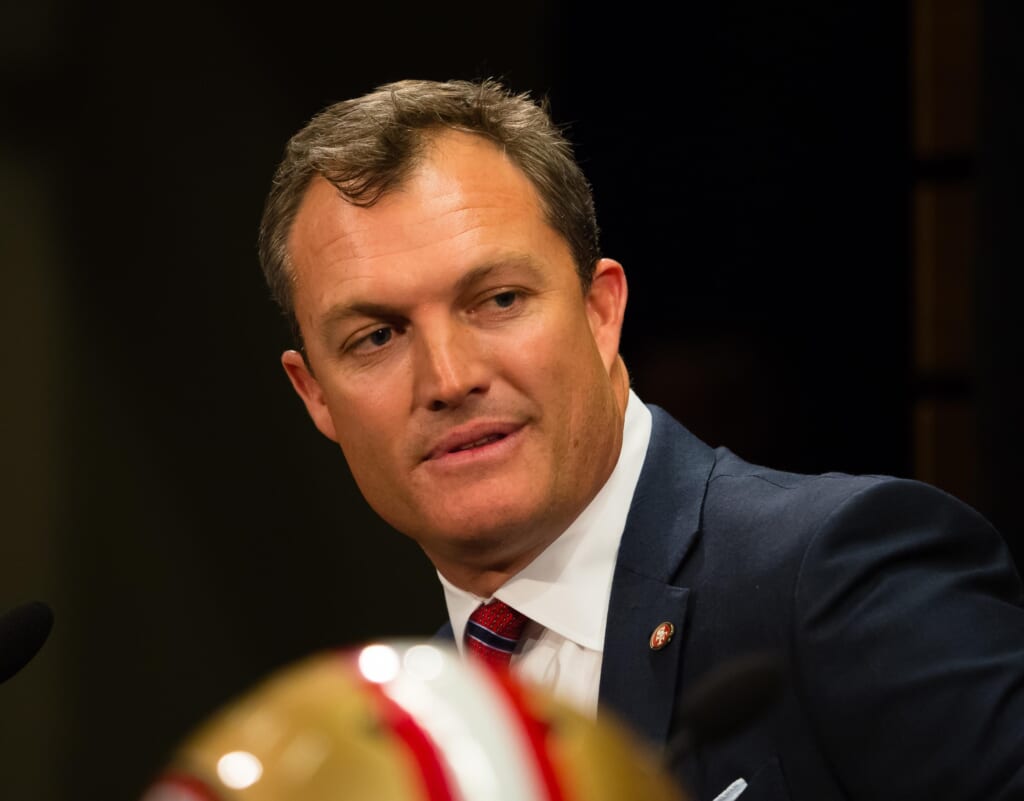 San Francisco found a way to add a franchise quarterback to the mix for a mere second-round pick. In no way was the team willing to let this situation play out and become similar to what we have seen between Kirk Cousins and the Washington Redskins. By locking up Garoppolo, the 49ers avoid having to place the franchise tag on him and kick the contract issue down the road. With an estimated $117 million in cap room prior to the extension, it’s a deal the 49ers could easily afford.

Garoppolo won all five of his starts for a 49ers team that was 1-10 prior to him taking over under center. He’s seen as a franchise quarterback. There was absolutely no reason for San Francisco to wait this thing out any further. Those questioning this extension are not looking at the details. Sure Garoppolo is now the highest-paid player in NFL history. But that’s going to last right up until Cousins signs his free agent deal, after which point Drew Brees and Aaron Rodgers will likely surpass him (more on that later).

Shows how rare franchise quarterbacks are

Without providing too much of a hot take here, it’s important to note that Garoppolo received north of $10 million guaranteed for each of his seven NFL starts up to this point. That’s not an indication that the 49ers overpaid for him. Instead, it’s indicative of an NFL where there are very few true franchise quarterbacks.

Even if we are yet to conclude that Garoppolo is indeed a franchise quarterback, the pickings are slim out there. Remember, Washington just doled out $23.5 million annually to a 33-year-old quarterback in Alex Smith. It’s a deal that guaranteed the former Chiefs and 49ers signal caller $71 million. San Francisco paying out a bit more than that for a player that’s seven years younger than Smith makes perfect sense.

There’s this whole idea out there called quarterback purgatory. We’ve seen the likes of Cleveland, Denver, Buffalo and Chicago deal with this big time in recent years. The only option that were available to teams as a way to get out of this mess was through the draft. San Francisco changed that on a dime here. It paid the piper on the back end. And it’s likely going to be more of a theme around the NFL in coming years. This leads us to our next takeaway. 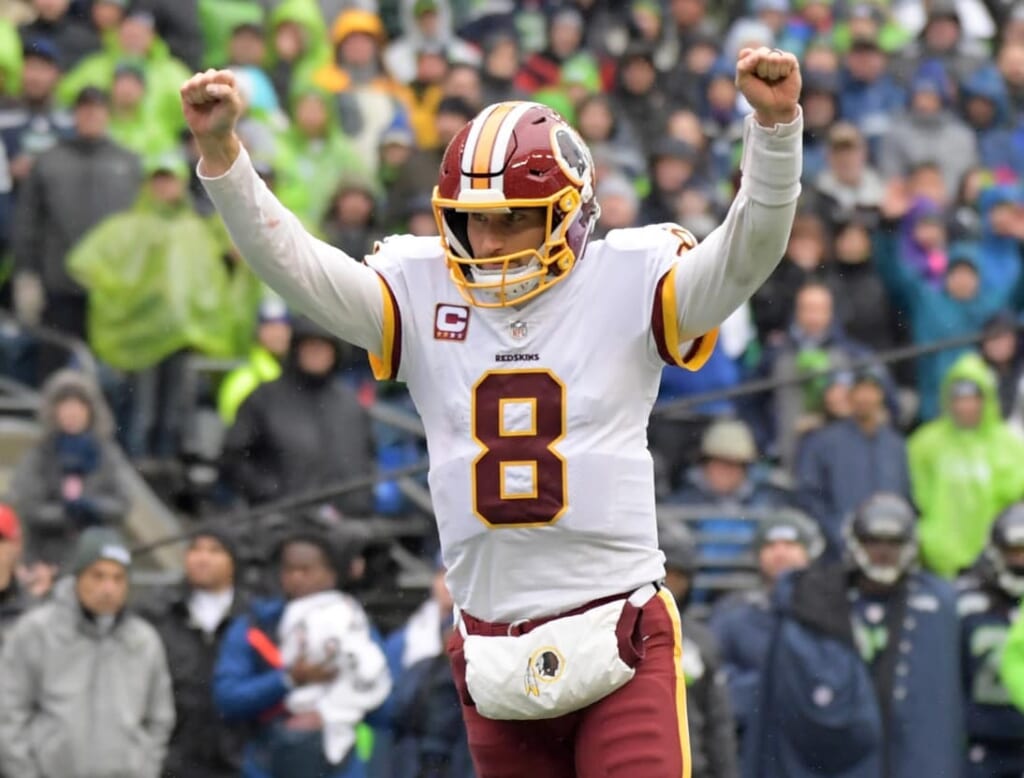 Washington might look to place the franchise tag on Cousins in hopes of trading him. But based on what said tag would cost (north of $35 million), that’s not a likely scenario here. Cousins would immediately sign the tag, forcing the Redskins to then drop it altogether or release multiple key veterans to get under the cap. That’s the long way of saying Cousins will be a free agent when March comes calling.

This situation could not have played out much better for Cousins. He was up there with Alex Smith as the most-coveted quarterback on the market. Now that Smith has been traded to Washington and Garoppolo has received the largest deal in NFL history, Cousins will likely follow suit.

The Denver Broncos and Cleveland Browns are among the teams in on Cousins. Though, it would not be a shock to see both Arizona and Minnesota get involved in the sweepstakes. With this type of interest and after seeing the terms of Garoppolo’s extension, it’s safe to say Cousins is looking at $30-plus million annually. Yeah, he’s a happy camper.

Garoppolo sets market for both Aaron Rodgers and Drew Brees

However absurd it may seem that a quarterback with seven career starts has set the market for two Super Bowl champions, that’s exactly what’s happened here. Unlike Cousins, neither Rodgers nor Brees is going to be on the open market. This means that there will not be a bidding war for the two quarterbacks. Brees has noted more than once he’s going to remain with the Saints. Meanwhile, the Packers are working hard to make Rodgers the highest-paid player in NFL history. Expect both things to get done relatively quickly now that the market has been set with Garoppolo.

With Rodgers, that likely includes a five-year deal worth well north of $150 million and $80 million guaranteed. Brees’ contract will be of a shorter variety, but should also include north of $30 million annually. Whoever signs his contract last will be the highest-paid player in terms of annual salary in NFL history. That much is clear. 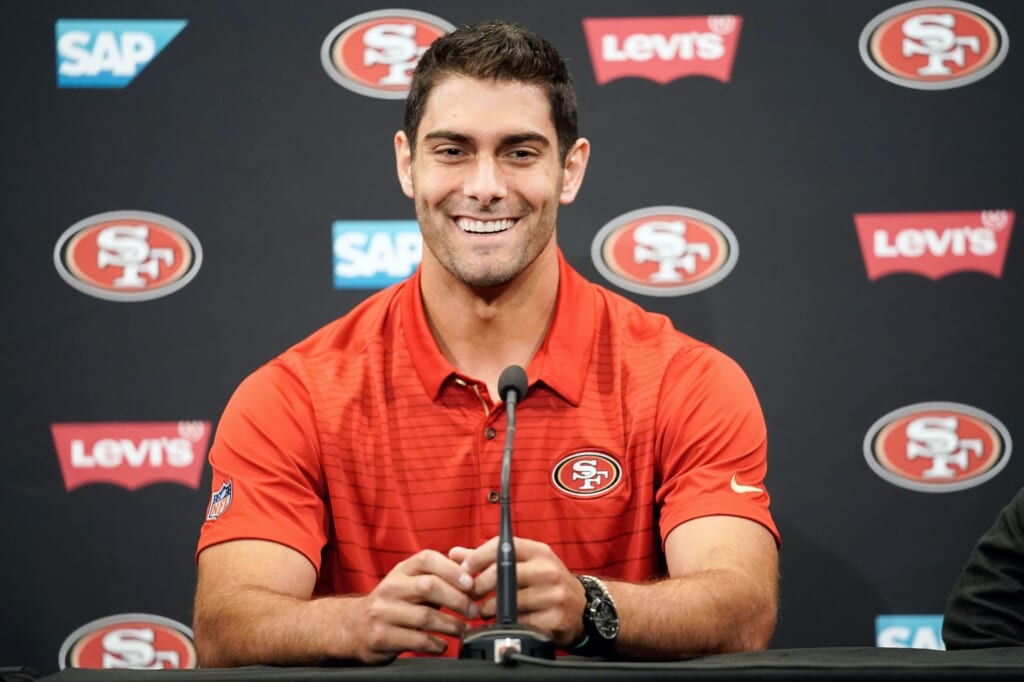 Depending on how Garoppolo’s contract is structured, the 49ers will have north of $90 million to spend in free agency. They also boast four picks in the first three rounds, including a top-10 selection. The culture in San Francisco changed the minute the team hired head coach Kyle Shanahan and general manager John Lynch last January. It was then taken to a whole new level with the success Garoppolo saw in his five starts.

He won each of those five starts, averaging nearly 30 points per game with victories over three playoff squads. It’s in this that the entire dynamic has changed for the 49ers after a 1-10 start to the 2017 season.

Players are going to want to come to the 49ers. They have the money to spend in free agency. And with talented young players all across the board, San Francisco’s long-term rebuild has been expedited a great deal. In fact, depending on what happens during the offseason, said rebuild is over. The 49ers can now look at potentially challenging another up-and-coming team in the NFC West, the Los Angeles Rams, next season. That’s crazy to think about considering just how bad this squad looked prior to Garoppolo’s arrival.