There are an abnormally large amount of meaningful games on the slate for Week 17 of the NFL season. A total of 10 matchups around the league will have playoff implications.

For the final time during the regular season, let’s check in on our biggest storyline for each Week 17 NFL game.

It remains to be seen whether Tom Brady will suit up for this meaningless game with New England already having the top seed in the AFC locked up. And while Bill Belichick seemed to indicate Brady will play against Buffalo, we are surely going to see a ton of Jimmy Garoppolo.

It will be interesting to see how the rookie second-round pick performs in his first extended regular season action. After all, Brady can’t suit up forever. Considering New England exhausted an early Day 2 pick on Garoppolo in the 2014 NFL draft, it’s going to want to see him in live-game action against a good defense.

Courtesy of USA Today: Joe Flacco needs a rebound performance to give Baltimore a shot at the playoffs.

Not only does Baltimore need to win against a free-falling Browns team, it needs the Kansas City Chiefs to defeat the San Diego Chargers. In this scenario, the Ravens won’t have a great understanding of where they stand in the playoff race unless that other game is a blowout early on. This means that Joe Flacco and Co. will have to treat this like a playoff game throughout.

Speaking of Flacco, he’s coming off his worst performance of the season in a disheartening loss to the Houston Texans last week. The Super Bowl-winning quarterback threw three interceptions and completed just four of his first 26 passes. Needless to say, Flacco needs to play better if the Ravens are going to have a shot at making the playoffs.

Cutler apologists got a reprieve this week when it was announced that Jimmy Clausen had suffered a concussion, meaning that the veteran Marc Trestman benched the week prior will start Week 17.

Rumors continue to swirl that Cutler, who leads the NFL in turnovers this season, will not return to the Bears next year. And while his $17 million cap hit might force some teams to step away from the table, Chicago should still be able to trade Cutler. This game also signifies the potential end of Trestman’s short stint as the team’s head coach.

Dallas Cowboys at Washington Redskins: What Exactly Does Dallas Have to Play for?

In order for Dallas to earn home-field throughout the playoffs, it would need both the Cardinals and Seahawks to lose and the Packers-Lions game to end in a tie. Jason Garrett’s squad can also earn a first-round by is those two NFC West teams fall. The likeliest scenario here is that Dallas will host the loser of the Packers-Lions matchup.

In any event, this game is pretty meaningless. And with DeMarco Murray still dealing with a broken bone in his hand, the Cowboys should consider resting him. Tony Romo, who hasn’t been anywhere near 100 percent since the start of the season, should also get a bit of a rest in this one. With that said, Dallas has indicated that the plans are for its starters to play. That could by a risky proposition against a Jim Haslett-led defense that has nothing to lose.

Jacksonville Jaguars at Houston Texans: Playoff Spot on the Line for Houston

Courtesy of USA Today: Can Watt strengthen his MVP bid by leading Houston to the playoffs?

Houston will earn the final playoff spot in the AFC with a win and losses by both Baltimore and San Diego. That’s not necessarily out of the realm of possibility considering how those two teams have played recently. As it relates to the Texans specifically, they need to take care of business against a bad Jaguars team to make any of this a possibility.

It remains to be seen how much Luck and the Colts starters will play in this one. Locked in as the fourth seed in the AFC, Indianapolis will host the loser of the Bengals-Steelers game in the wild card round. Luck, who has struggled a great deal the past four weeks (eight turnovers), may want to get some positive work in against a bad Titans defense.

San Diego earns a playoff spot with a win here. There’s not much more to say about that. Now if the Chiefs come away with a win, they stand a chance of earning a trip to the postseason. Andy Reid’s squad needs Baltimore and Houston to lose in order to make it to the second season with a win here. Kansas City defeated San Diego 23-20 in Southern California back in Week 7.

By now it’s pretty much a foregone conclusion that Ryan will be fired on Monday. If that’s the case, we are pretty sure that he’s going to want to go out on high note against a division rival. This game could also give him a tad more confidence heading into an offseason that will likely see Ryan as a prime candidate for multiple head coaching openings around the NFL. 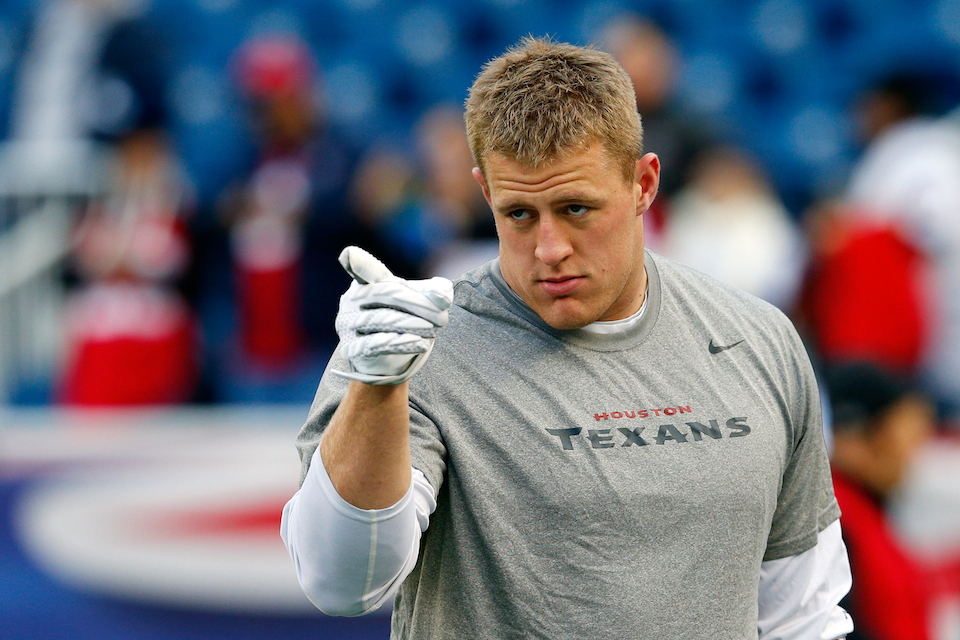 Courtesy of USA Today: Will Watt strengthen his MVP chances by leading Houston to the playoffs?

I am really intrigued to see just how much the Buccaneers really try to win this game. With a loss, they will earn the No. 1 overall pick and the right to select Marcus Mariota in the 2015 NFL draft. And while there is something to be said about playing with pride, head coach Lovie Smith seems to suggest that Tampa Bay is looking at something else heading into this game.

If you have to be down here, you need to get something from it.

Five weeks ago, no one would have predicted that the Eagles would be playing a meaningless Week 17 game with absolutely no hope of earning a ticket to the playoffs. But that’s the situation Chip Kelly’s squad is in heading into a divisional matchup against a Giants team that’s looking to acquire the highest possible pick in the upcoming NFL draft.

Carolina Panthers at Atlanta Falcons: NFC South on the Line

The winner of this game will earn the fourth seed in the NFC Playoffs and host a double-digit win team in the wild card round. However ridiculous it might sound, the team that does win this game stands a decent chance of earning a trip to the divisional round of the playoffs, especially if the Arizona Cardinals (as expected) lose out on the NFC West title and have to enter the playoffs as the fifth seed.

Denver really wanted this game to mean something as it relates to home-field advantage in the AFC Playoffs. Unfortunately for John Fox’s squad, it dropped the ball big time in a less-than-inspiring performance against the Cincinnati Bengals on Monday Night Football.

This means that Peyton Manning, who threw four interceptions against Cincinnati, will have to suit up and play against a Raiders team that has won three of its last five outings in order to secure a first-round bye. If Denver were to lose, Cincinnati could pick up that coveted No. 2 seed with a win over Pittsburgh Sunday night. 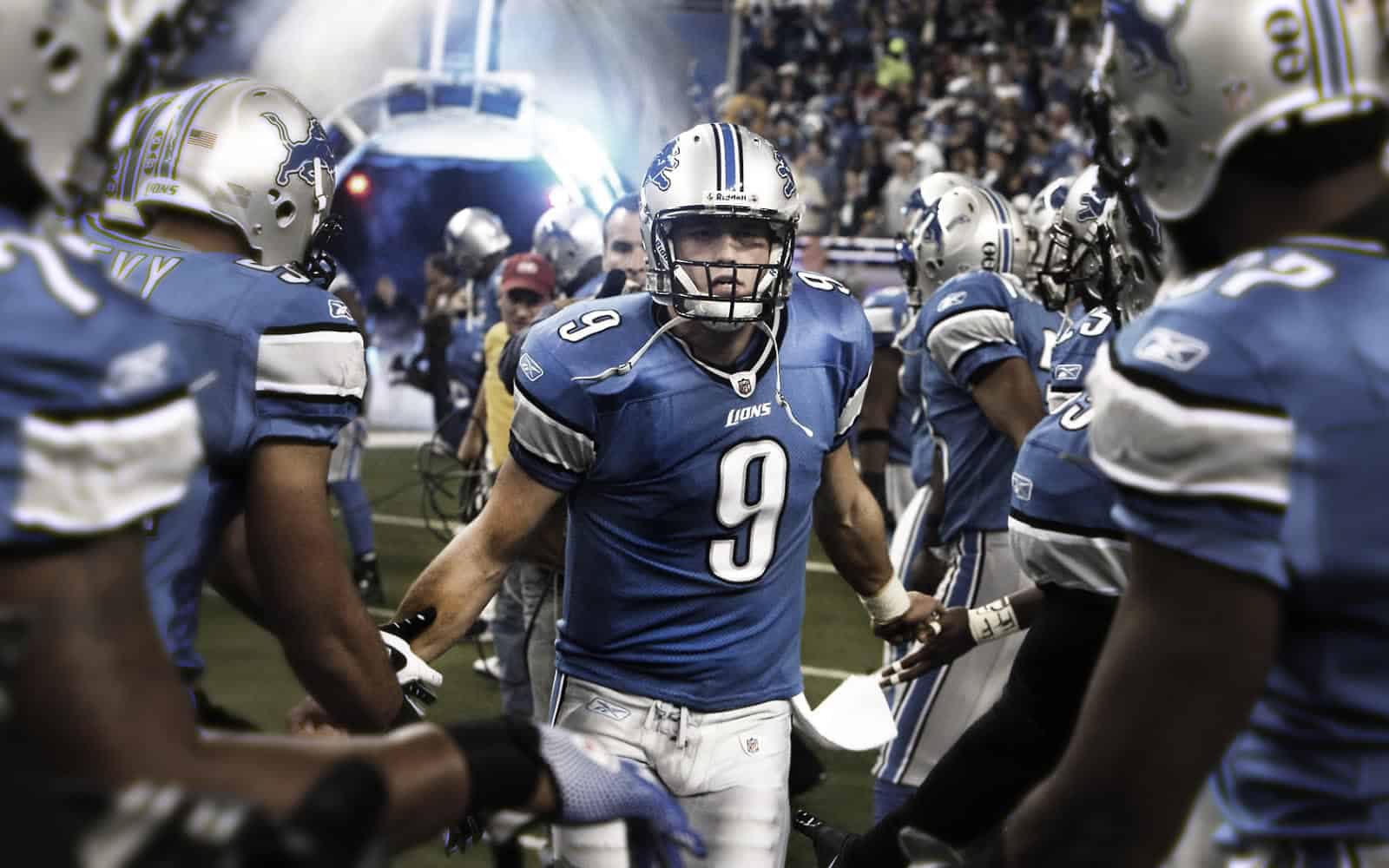 Courtesy of USA Today: This could be a career-defining game for Stafford.

Detroit has not won in the state of Wisconsin against the Packers in its last 23 attempts. It needs to pull out the win here in order for the Lions to avoid having to go to Dallas and play a hot Cowboys team in the wild card round.

For the Packers, it’s all about earning a first-round bye and playing at Lambeau Field in the divisional round of the playoffs. You don’t need me to tell you how important that is for Aaron Rodgers and Co. Otherwise, they will have to travel to Dallas to start the new year. That’s a less-than-ideal scenario for a club that has struggled a great deal on the road this year.

Harbaugh will get his pink slip from San Francisco within two days of this season finale. It’s going to be a sad end for a tenure that started and continued to show a ton of success up until what has been a disappointing 2014 campaign.

With all the drama gone from this one, Harbaugh would love his swan song to include a win against a division rival that’s headed to the playoffs. A division rival that could potentially earn the NFC West title with a win. It’s also going to be interesting to see how 49ers fans greet Harbaugh in his final game as the team’s head coach at Levi’s Stadium.

Does anyone really anticipate a scenario here where the Seahawks lose at home against St. Louis with home-field advantage on the line? That would be the biggest choke job from a defending Super Bowl champion since…last year.

The way Seattle is playing right now, there is little doubt that its the best team in the NFL. It’s also important to note that Pete Carroll’s squad will be looking to avenge a loss to the last-place Rams earlier this season. With another loss to the Rams, however unlikely it might be, Seattle would then drop to the fifth seed and likely have to play a hot Cowboys team in Dallas.

Cincinnati Bengals at Pittsburgh Steelers: AFC North on the Line

At this point, we aren’t exactly too sure what will be on the line for Cincinnati. We do know that this game will dictate the winner of the AFC North. However, Cincinnati could still have a shot at earning a first-round bye if Denver were to fall to Oakland.

As it relates to Pittsburgh, it’s rather simple. Mike Tomlin’s squad will either enter the postseason as the third or fifth seed. With a win, the Steelers will take on the final seed in the AFC (Baltimore, Kansas City, San Diego or Houston). With a loss, much like Cincinnati, the Steelers would then have to travel to Indianapolis in the wild card round.