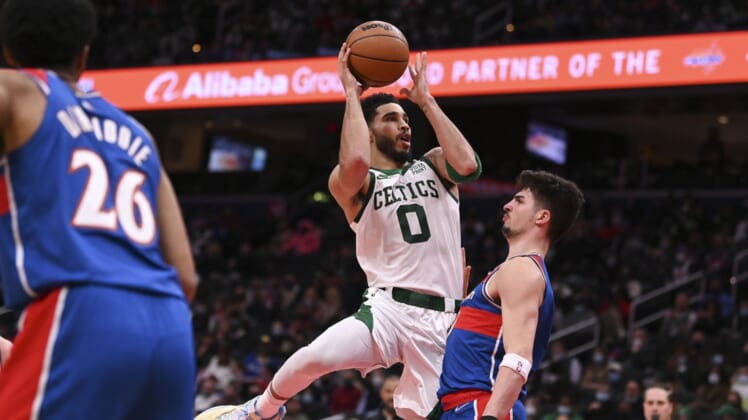 The Boston Celtics’ bid for the top seed in the Eastern Conference continues with Sunday’s regular-season home finale against the Washington Wizards.

The Celtics (48-30) began Saturday’s action 1.5 games behind the top-seeded Miami Heat and a half-game behind the second-place Milwaukee Bucks. Boston has four games left, starting with the resurgent Wizards.

Washington (34-43) was eliminated from playoff contention earlier this week but has won four of its last five games.

The Wizards begin a three-game road trip against a Celtics team that is adjusting without center Robert Williams III, who suffered a torn meniscus last weekend.

Williams underwent surgery on Wednesday and is hoping to return before the start of the second round of the playoffs.

Boston lost consecutive games to the Toronto Raptors and the Heat before beating the Indiana Pacers 128-123 on Friday.

Jaylen Brown and Jayson Tatum combined for 63 points to lead the Celtics, who have struggled on the defensive end since Williams’ injury. Boston has allowed at least 110 points in three of its last four games.

“We did get a little, you know, coddled with the fact that Rob was back there,” Celtics guard Marcus Smart said. “He cleaned up a lot of those mistakes. With him out, we got to change just a little bit. Everybody else has to give a little bit more than what they were because of that.

“We still have everybody else defensively that has been doing great on defense. And we’ll continue to do that with or without Rob. But obviously, you know, while he’s getting his recovery, we’ve got to hold it down for him.”

“We missed some opportunities, had some turnovers trying to force some passes tonight, but Daniel had a great game overall,” Udoka said. “You can see his growth in what he’s doing the past few games. It’s going to be important going forward.”

Boston lost its first two meetings against Washington this season before routing the Wizards 116-87 on Jan. 23. Tatum scored 51 points in the victory while Brown had 18 points and 10 rebounds.

The Wizards appear intent on finishing strong despite playing without forward Kyle Kuzma, who is expected to miss his ninth straight game with right knee tendinitis.

Kentavious Caldwell-Pope scored a season-high 35 points and Kristaps Porzingis added 24 in a 135-103 win over the visiting Dallas Mavericks on Friday.

Caldwell-Pope is averaging 25.5 points on 67.8 percent shooting over his last four games. He was 13-of-19 shooting against Dallas with six 3-pointers.

“He got going early,” Wizards coach Wes Unseld Jr. said. “He didn’t force the issue. He just took advantage of the shots that were presented to him. Once he sees a couple go in, now he’s shooting into a big basket. He’s had nights like that throughout his career.”

Washington has also received a spark from rookie forward Corey Kispert, who is averaging 7.9 points while shooting 44.7 percent from the field and 34.4 percent from 3-point range.

The Gonzaga product has made 100 3-pointers this season, surpassing Bradley Beal (91) for the most by a rookie in franchise history.