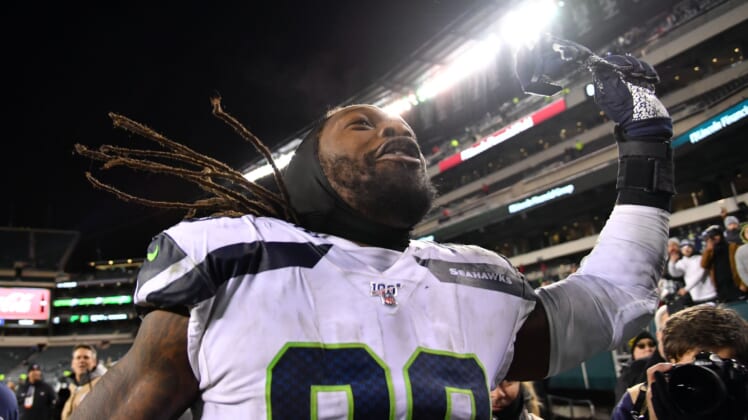 Cam Newton is now a member of the New England Patriots. He becomes the latest big-name free agent to ink a contract with the 2020 NFL season set to get going in less than three months.

Though, there’s still a number of other players on the market that could make a major impact this season. Pass rushers in Minneapolis and Seattle have been hit with bare markets.

Meanwhile, a quarterback who has not suited up since back in 2016 is getting renewed play.

These are among the eight-best free agents remaining as the NFL prepares for the 2020 season.

Griffen’s decision to opt out of his contract for the 2020 season might now look pretty bad. Though, it must be noted that the Vikings likely would have released the 32-year-old former Pro Bowler had he not opted out.

The good news for Griffen is that the veteran now sits atop the market. The former mid-round pick recorded 24 tackles for loss and eight sacks for Minnesota last season. He’s been linked to the Seattle Seahawks, among other teams. Expect something to get done on this front within the next few weeks.

Pretty much one of the most underrated tackles in the game, Glenn’s foray into free agency could not have come at a worse time. The former Buffalo Bills first-round pick missed all but six games with a head injury last season. It forced Cincinnati to release the left tackle.

Now 30 years old, Glenn is looking at nothing more than a prove-it, short-term deal on the open market. He’s highly unlikely to be signed as a starting left tackle. At this point, moving to the right side or being a swing tackle makes the most sense. Even then, he would provide experience and talent to pretty much any offensive line in the NFL.

It seemed like Ryan had a deal with the New York Jets earlier this summer. Now that said deal fell through, the 29-year-old veteran is right back on the market. The two-time Super Bowl champion has been holding out for a deal that would net him around $10 million annually. At this point, that’s not going to happen.

A former third-round pick of the Patriots, Ryan has started 85 games in seven seasons. Last season with the Titans, he recorded 113 tackles, 18 passes defended and four interceptions. What makes Ryan so valuable is the fact that he could be tasked with playing safety if need be. Look for the veteran to latch on with a contender in short order.

Walker has carved out a tremendous NFL career for himself after the former Central Missouri State product was a sixth-round pick of the 49ers all the way back in 2006. Walker earned three consecutive Pro Bowl trips with the Titans from 2015-17, averaging 78 receptions for nearly 900 yards.

At issue here is that dreaded injury bug. Walker, 35, has played a grand total of eight games over the past two seasons. This seems to suggest that he’s looking at a near veteran minimum salary in free agency. Of the teams bandied about, Walker’s former 49ers squad could make sense here.

Baltimore’s decision to extend young safety Chuck Clark this past spring led directly to Jefferson’s departure from the Ravens. They released the veteran safety back in February after just three seasons, saving $7 million against the cap in the process. Such is the nature of the beast in today’s NFL.

Jefferson, 28, is now on the open market after having played just five games for the Ravens a season ago. He’s certainly going to get some play. The former Oklahoma star recorded an average of 61 tackles and 7.5 tackles for loss from 2015-18, accumulating 18 passes defended and four interceptions in the process.

After jumping on to the scene as a mid-round pick from Florida State back in 2014, the latter stages of Freeman’s career in Atlanta did not go too swimmingly. The team signed him to a massive five-year, $41.25 million extension back in August of 2017. He put up 1,182 total yards that season before missing all but two games the following year to injury.

Now 28 years old, Freeman remains on the market after Atlanta released him. The two-time Pro Bowler might have to settle for a short-term deal. However, he more than has enough left in the tank to make an impact. Last season saw Freeman record 1,066 total yards and six touchdowns. That included 59 receptions on 70 targets.

Acquired from Seattle ahead of last season, Clowney struggled in his first year in the Pacific Northwest. Dealing with a multitude of injuries, the former No. 1 overall pick recorded a grand total of three sacks in 13 games. It was, by far, Clowney’s worst statistical performance.

The three-time Pro Bowler remains on the open market largely because he overvalued himself when free agency opened in March. Things have not heated up in the summer months, either. What we do know is that Clowney remains one of the most-talented edge rushers in the game. He recorded a combined 59 quarterbacks hits and 24.5 sacks with the Houston Texans from 2016-18.

There’s certainly been a lot of talk surrounding this former Super Bowl quarterback returning to the league. The NFL has admitted that it mishandled the Kaepernick-led national anthem protests that started back in 2016. With public sentiment now favoring Black Lives Matter and the correlated protests, it’s looking more and more like Kaepernick will be employed this coming season.

From a pure on-field perspective, about half of the NFL could use upgrades at backup quarterback. Lost in all the drama behind the scenes is the fact that Kaepernick put up 18 total touchdowns and just four interceptions in his last NFL season. He remains a top-end free agent.