The main course has yet to arrive for college football fans, but the appetizers offered up during Saturday’s bowl games were scrumptious treats that featured some big-time performances.

An all-time NCAA record was broken by one of the best players in college football most fans have never heard of. Meanwhile in the same game, one player’s career ended on a particularly bitter note. An ironic twist capped off one bowl game and some windy conditions had a lot to do with another.

We’ll take a look at these stories and more as we examine the top takeaways from Saturday’s slate of bowl games.

1. Irony and agony at conclusion of the Celebration Bowl 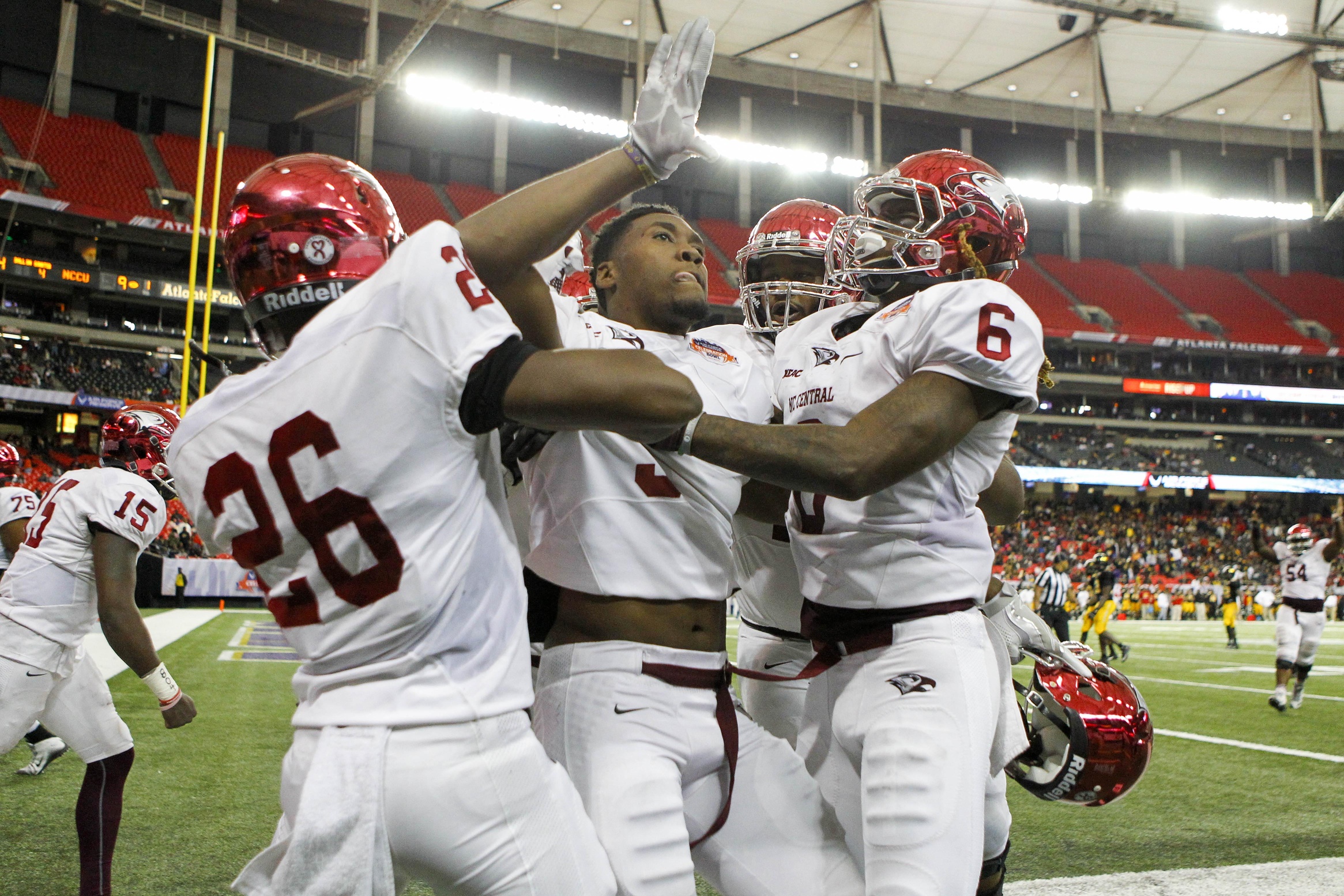 Get this. In the waning moments of the game between Grambling State and North Carolina Central Saturday, a 15-yard penalty for excessive celebration kept the Eagles from potentially winning…the Celebration Bowl.

North Carolina Central quarterback Malcolm Bell, who had a miserable game overall, finally found a receiver for a touchown with a little over two minutes remaining in the game. The receiver who caught the 39-yard touchdown pass, Quentin Atkinson, then got caught up in the moment, took his helmet off and began to celebrate with the crowd.

That’s a huge no-no in college football. And it earned Atkinson a 15-yard penalty for excessive celebration. That moved the extra point back 15 yards, and from that distance kicker Brandon McLaren had his extra point attempt blocked. That blocked kick was the difference in the game, as Grambling went on to win by the score of 10-9.

“I kind of felt fault for that,” Atkinson said after the game, per the Associated Press. “I do want to apologize to my team for that because that was a selfish act. I’m not selfish, but it was the heat of the moment and I was excited to bring the team back with an outstanding play.”

Now, we’ll never know if the Eagles could have somehow won the game in the final minutes or overtime, but Atkinson’s penalty absolutely had something to do with the loss. It was a terrible way to lose and one Atkinson and his teammates won’t forget any time soon.

With winds howling above 40 miles per hour at University Stadium, it was hard to get any kind of passing game going for either team at the Gildan New Mexico Bowl. Here’s a quick example of what the teams were dealing with on Saturday in Alberquerque.

The wind was blowing decidedly one way in this game to the point where New Mexico actually called a timeout before the end of the first quarter near the goal line so as to stay with the wind to finish out the drive before having to switch in the second quarter.

As a result of these blustery conditions, the contest was devoid of much passing offense until late when Texas-San Antonio’s Dalton Sturm threw a couple of touchdowns. Unfortunately for the Roadrunners, however, the scores ended up being too little, too late, in the 23-20 loss to the Lobos.

Between the two teams, quarterbacks went 13-of-32 for 195 yards. On the other hand, the teams combined to rush for 465 yards. While neither team featured prolific passing offenses heading into the bowl game, the wind had plenty to do with the lack of success through the air.

Remarkably, the two kickers in this game, Jason Sanders and Victor Falcon, made all three of their field goal attempts and missed just one extra point in five chances.

If you’ve watched the Lobos this year, then the fact they threw the ball just six times Saturday wasn’t too shocking. After all, they averaged just a tick over 14 attempts per game all year. Still, seeing them pretty much exclusively employ their triple-option rushing attack was quite remarkable, even with the weather being what it was.

Utilizing a dynamic trio of runners — Lamar Jordan, Richard McQuarley and Teriyon Gipson, each of whom gained at least 60 yards — the Lobos were able to keep the Roadrunners’ offense off the field just enough to pull out the three-point win.

The win marked the first time since 2007 that New Mexico had won a bowl game, the only other bowl win in program history. 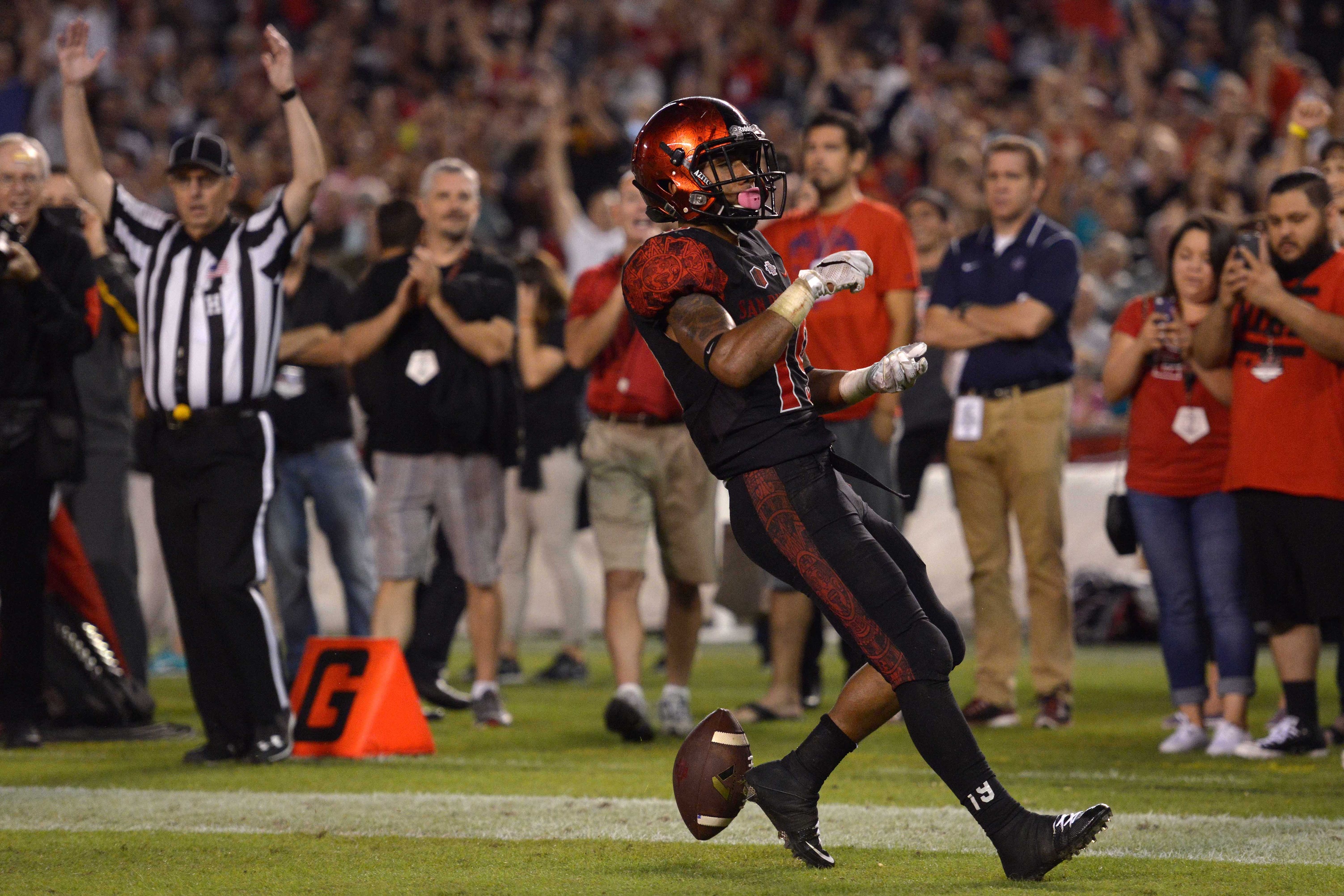 San Diego State running back Donnel Pumphrey is now the NCAA’s all-time leading rusher. He capped off an outstanding college football career with an equally outstanding effort Saturday against Houston, going for 115 yards and a touchdown on 19 carries to help the Aztecs blow out the Cougars, 34-10.

Pumphrey also added another 26 yards on a ridiculous one-handed reception in the third quarter (watch here), one play before rushing in a 32-yard touchdown to give the Aztecs the lead after they fell into an early 10-0 hole.

San Diego State head coach Rocky Long didn’t hesitate to pull Pumphrey from the game shortly after he broke the record to ensure his player retained the record. By that time, the Aztecs had the game well in hand, 27-10, thanks to a pick-six by Ron Smith and a quick 27-yard touchdown strike from Christian Chapman to Curtis Anderson III.

There is an asterisk next to Pumphrey’s record, since Ron Dayne’s previous record of 6,397 yards did not include his bowl game performances — something the Heisman Trophy winner was quick to point out. Despite that, there is no doubt that Pumphrey deserves all the accolades and praise he’ll receive for his accomplishment.

A diminutive back (5-foot-9, 180 pounds), he’s been a veritable giant in college football the past four years. And his accomplishment Saturday against Houston is all the more memorable when you consider the Cougars had allowed 2.9 yards per carry all year, the second-best mark in the nation.

It’s been a rough past few weeks for the Cougars, who went into the final weekend of the regular season knowing head coach Tom Herman was a goner, lost his final game in devastating fashion and then were dominated Saturday by San Diego State.

A Heisman contender last year and a player many thought would contend for the coveted trophy this year, Greg Ward Jr. didn’t have nearly the same impact on the ground in 2016 as he did the year before. And his passing game, while somewhat improved, was not good enough to counter the lack of rushing production.

Life isn’t fair, but it still feels a bit wrong that Ward’s final games with Houston were played under such a cloud as this. His performance in the Las Vegas Bowl goes hand in hand with that sentiment. Ward was unable to generate a single score through the air, throwing four interceptions instead. And though he did manage a rushing touchdown in the first quarter (tying a school mark with 39 on his career), he finished with zero rushing yards on 22 attempts.

It was a far cry from last year’s rousing success at the Chick-fil-A Peach Bowl against Florida State, when he earned Offensive Player of the Game honors in a winning cause. A player who has always been a class act at Houston, it remains to be seen what is in store for the senior going forward. One thing we know for sure, it’s a shame his career had to end on such a low note. 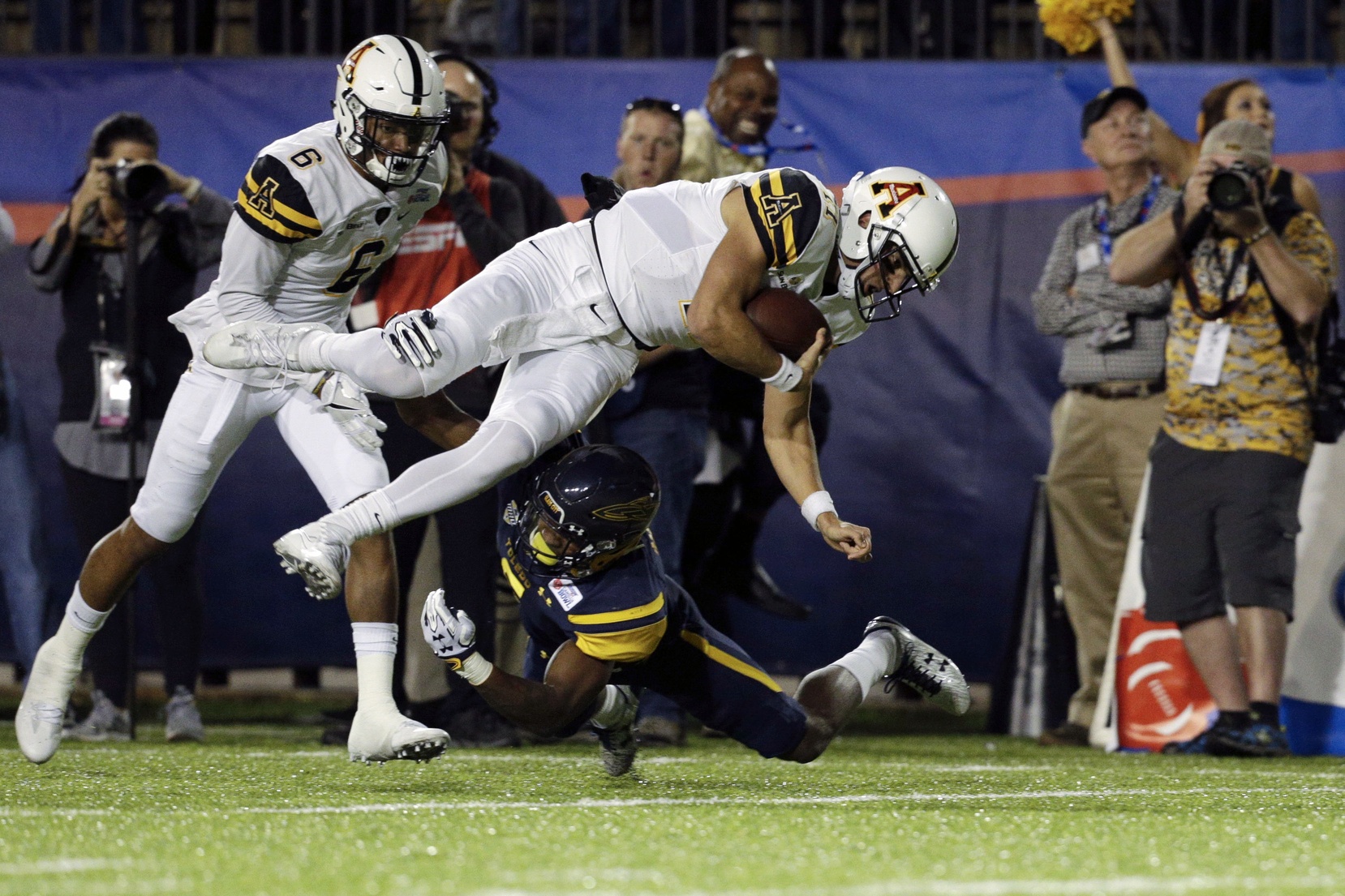 Heading into this weekend, we predicted the Mountaineers would need to play keep-away from Logan Woodside and the Toledo offense in order to pull out a win. Toledo’s offense was among the more explosive in the nation this year, and we saw how potent it can be during this game as well.

But thanks to some impressive poise by Appalachian State quarterback Taylor Lamb and the rushing prowess of Marcus Cox, the Mountaineers held on to win, 31-28.

Lamb wasn’t particularly effective passing the ball, going 14-of-32 for 119 yards, but he also didn’t turn the ball over. He added another 126 yards and a touchdown on the ground and was a guy Toledo’s defense could not keep track of during broken plays.

Cox rushed for 143 yards and a touchdown on 22 carries, and the Mountaineers finished with 297 total rushing yards on 49 attempts. Because they were able to consistently move the chains (25 first downs) on the ground, they won the time of possession by more than 10 minutes.

On top of that, the Mountaineers got a bonus touchdown on an outstanding kickoff return by freshman Darrynton Evans, which happened right after the Rockets had tied the game up at 21-21 (watch here).

The Rockets didn’t do anything to lose the game offensively, playing a clean game with no turnovers. But the game of keep-away that Appalachian State played kept the high-octane Toledo offense from going ham. 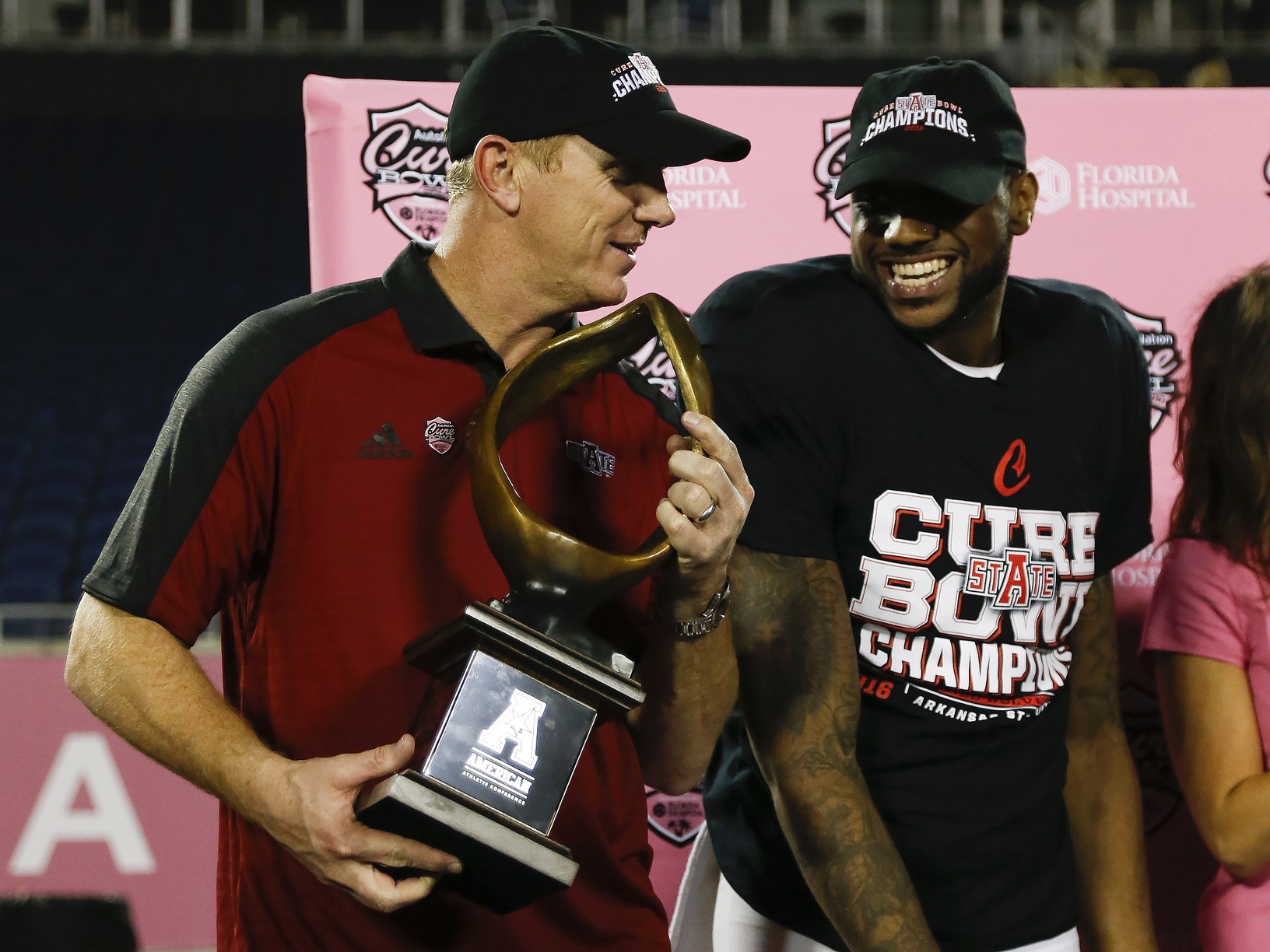 The AutoNation Cure Bowl featured two teams trending the opposite direction. Arkansas State finished the regular season winning seven out of their last eight games, while UCF limped in having lost two games in a row. Sometimes trends are meant to be broken. This was not one of those times.

In a sloppy effort by both teams (26 penalties for 222 yards), the Red Wolves capitalized on their limited opportunities and ended up running the Knights out of the building in a 31-13 blowout win.

The scoring got started when B.J. Edmonds fell on a blocked punt in the end zone to give Arkansas State an early lead. Red Wolves quarterback Justice Hansen threw three touchdown passes and it was 17-0 before UCF landed on the scoreboard. From that point on, the outcome was never in doubt.

The Knights coughed up three fumbles in addition to the special-teams blunder that gave the Red Wolves their early lead. UCF quarterback McKenzie Milton was not sharp, completing 22-of-39 passes for just 175 yards and a touchdown, while the Knights’ rushing attack was non-existent (12 yards on 30 carries).

The ugly win was still a momentous one for Arkansas State and third-year head coach Blake Anderson, who won his first bowl game as a head coach. After his team lost the first four games of the year, it rattled off eight wins in the final nine games to finish with a very respectable 8-5 record.

8. Ito Smith and Allenzae Staggers saved Southern Mississippi from itself 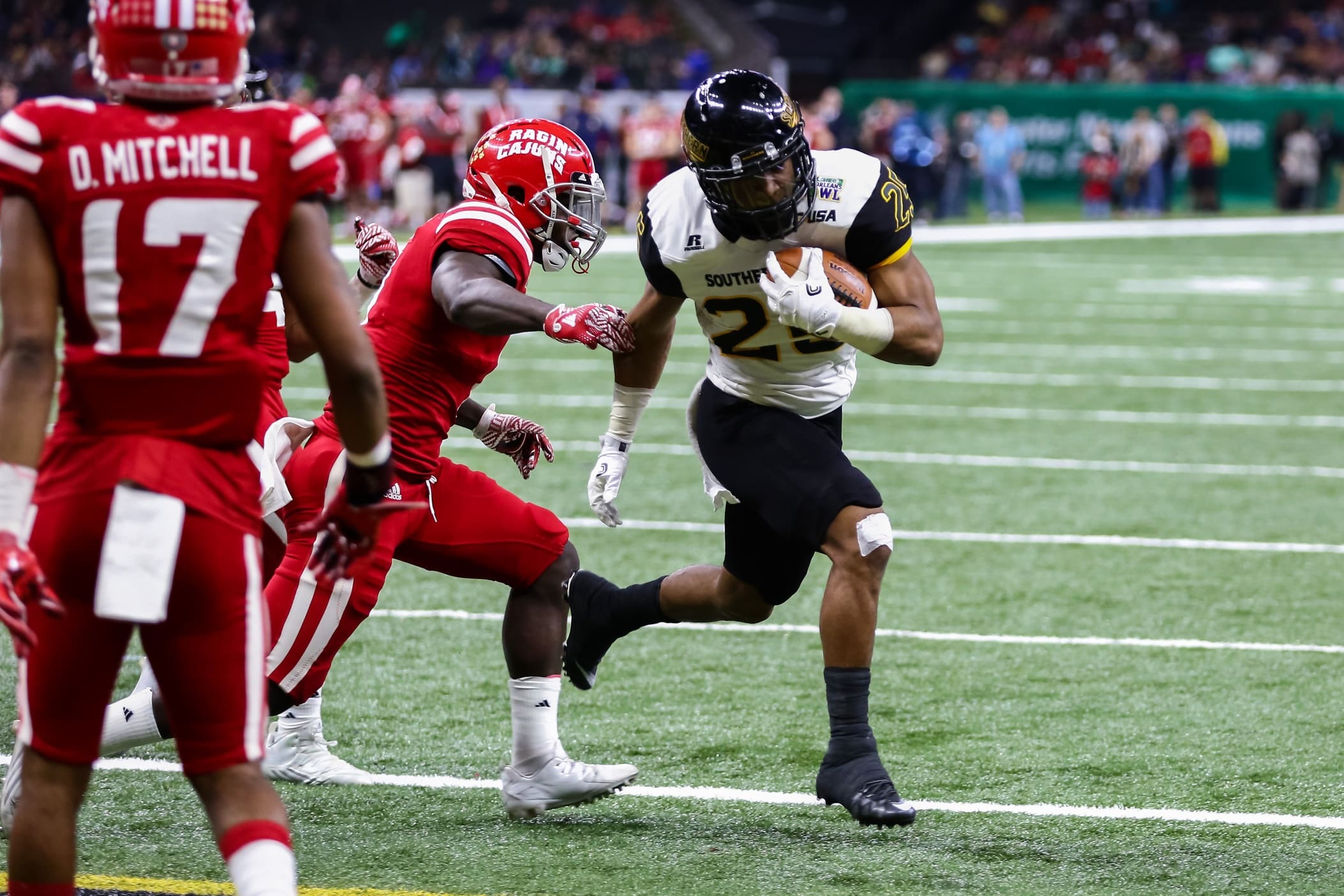 The final bowl game on Saturday was not the prettiest display of football we’ve seen this year. But Ito Smith’s work between the tackles and Allenzae Staggers’ ability to get loose down the field in the passing game made an ugly game worthwhile.

The Eagles significantly outgained the Ragin’ Cajuns at the Mercedes-Benz Superdome, 481 to 252 yards, and this game really should not have been close.

Southern Mississippi was extremely undisciplined. The team was penalized a ridiculous 13 times for 131 yards and lost the turnover battle, two-to-one. Yet thanks to the defense’s ability to keep Louisiana Lafayette quarterback Anthony Jennings from making anything happen, and thanks to the play of Smith and Staggers, the Eagles escaped with the victory.

Smith was largely shut down for most of the first half. Then he came alive as the game wore on, finishing with 142 total yards and three touchdowns. Staggers set a New Orleans Bowl record, catching 11 passes for 230 yards and a touchdown.

Without their efforts, the Eagles would have crash landed in the biggest game of the year. As it was, they were lucky to get out with the 28-21 win.