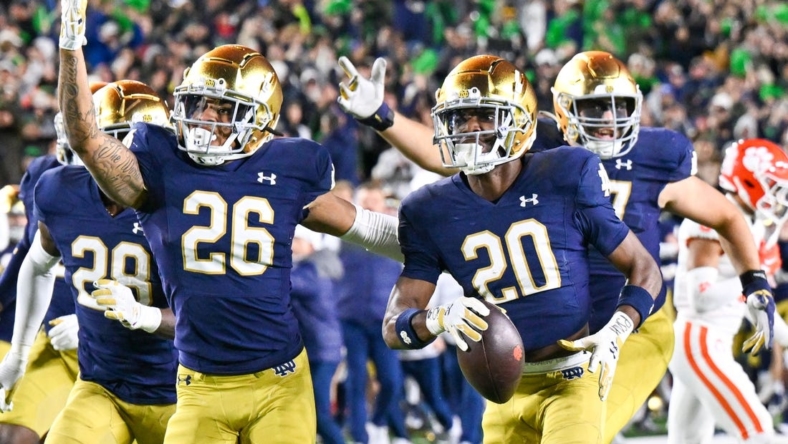 Logan Diggs and Audric Estime each rushed for over 100 yards and Notre Dame got touchdowns from all three aspects of its team Saturday night as it routed No. 4 Clemson 35-14 in South Bend, Ind.

Diggs collected a game-high 114 yards on 17 carries, while Estime rushed for 104 yards on 18 attempts, including a 2-yard touchdown 23 seconds into the fourth quarter that made it 21-0.

The Fighting Irish (6-3) iced the game less than two minutes later when Benjamin Morrison intercepted DJ Uiagalelei and returned it 96 yards for a 28-0 lead. That was only the second time that the Tigers (8-1, 6-0 Atlantic Coast Conference) had reached Notre Dame territory up until that point.

Uiagalelei led Clemson to a pair of fourth-quarter touchdowns, even throwing for a 4-yard strike to Joseph Ngata with 1:35 left. Uiagalelei went 27 of 39 for 191 yards, but it wasn’t enough to keep the Tigers from probably tumbling out of the national championship picture.

Stetson Bennett passed for two touchdowns and rushed for one to lead the Bulldogs to a convincing victory over the Volunteers in Southeastern Conference play at Athens, Ga.

Bennett completed 17 of 25 passes for 257 yards and Ladd McConkey caught five passes for 94 yards and a touchdown as the Bulldogs (9-0, 6-0 SEC) defeated Tennessee for the sixth consecutive time.

Hendon Hooker was 23-of-33 passing for 195 yards and one interception for Tennessee (8-1, 4-1). Hooker had thrown a touchdown pass in 20 consecutive games prior to being unable to find the end zone against the Bulldogs.

Ohio State overcame the elements and upset-minded Northwestern when Miyan Williams scored two second-half touchdowns for the visiting Buckeyes in a win against the Wildcats in Big Ten play.

Heisman Trophy candidate C.J. Stroud of Ohio State (9-0, 6-0 Big Ten) passed for a career-low 76 yards on 10-of-26 passing while being hampered by steady rain and high winds. He ran for a career-high 79 yards on six carries, including a 44-yarder late in the fourth quarter to set-up a 2-yard run by Williams to make it 21-7.

Blake Corum ran for 109 yards and two touchdowns, Donovan Edwards had 161 yards from scrimmage with a touchdown and the Wolverines used a big second half to beat the Scarlet Knights in Piscataway, N.J.

Jayden Daniels threw two touchdown passes, ran for a touchdown and passed for a winning two-point conversion as the Tigers beat the Crimson Tide in overtime in a Southeastern Conference game in Baton Rouge, La.

Daniels passed for 182 yards, rushed for 95 and connected with Mason Taylor for the winning conversion as the Tigers (7-2, 5-1 SEC) took the lead in the SEC West. Bryce Young passed for 328 yards and a touchdown to lead the Tide (7-2, 4-2), who lost for the second time in three games.

Alabama got the ball first in overtime and Roydell Williams ran 1 yard for a touchdown and a 31-24 lead. But on the Tigers’ first play, Daniels ran 25 yards for a touchdown and coach Brian Kelly decided to go for the win and Taylor barely crossed the goal line after catching Daniels’ pass. Alabama’s Will Reichard kicked a 46-yard field goal with 21 seconds left in the fourth quarter to force overtime after the lead changed hands six times in the second half.

Kendre Miller ran for 158 yards and a touchdown to help the Horned Frogs remain unbeaten after rallying to beat the Red Raiders in Fort Worth, Texas.

The Horned Frogs (9-0, 6-0 Big 12) trailed by four points entering the fourth quarter, then scored three touchdowns in the final period to complete the comeback. Quarterback Max Duggan threw both of his touchdown passes in the fourth quarter and finished with 195 yards.

Red Raiders (4-5, 2-4) backup quarterback Tyler Shough replaced starter Behren Morton in the second quarter, and kept the road team in contention. He put the Red Raiders ahead on a 33-yard touchdown pass to J.J. Sparkman.

The Ducks (8-1, 6-0 Pac-12) remained the Pac-12’s only undefeated team in conference play, scoring more than 40 points for the eighth consecutive time, all in wins. Nix completed 20 of 24 passes for 274 yards before exiting in the fourth quarter. Bucky Irving rushed for 120 yards on 11 carries.

Colorado (1-8, 1-5) cut into a 21-0 deficit with J.T. Shrout’s deep throw to wide receiver Jordyn Tyson, who caught the ball on the run, gained his balance and ran for an 81-yard touchdown. Shrout had 247 passing yards and Tyson 137 receiving yards for Colorado.

Bijan Robinson rushed for 209 yards as the Longhorns survived a second-half rally by the Wildcats in Manhattan, Kan., to win and move into a three-way tie for second in the Big 12.

The Utes grabbed an early lead and then leaned on their running game while their defense recovered four fumbles to keep the visiting Wildcats at bay in a win in Salt Lake City.

The Utes (7-2, 5-1 Pac-12) ran 55 times for 306 yards, attempting only four passes after halftime while delivering the Wildcats (3-6, 1-5) their fourth consecutive loss. Utah quarterback Cam Rising, who missed the team’s previous game with an undisclosed injury, completed 13 of 25 passes for 151 yards and one touchdown.

Arizona’s Jayden de Laura completed 10 of 20 throws for 159 yards but was lifted after Utah went up 38-10 on Rising’s touchdown pass to Thomas Yassmin with 10:16 to go.

Kaytron Allen finished with three touchdowns and 158 yards from scrimmage as the Nittany Lions cruised to a win over the Hoosiers in Bloomington, Ind.

Payton Thorne went 19-of-29 passing for 182 yards and two touchdowns to help lead the Spartans to an upset win over the Fighting Illini in Champaign, Ill.

Jalen Berger rushed for 81 yards on 15 carries for Michigan State (4-5, 2-4 Big Ten), which won on the road for the first time in four tries.

Tommy DeVito went 25-of-37 passing for two touchdowns and Chase Brown rushed for 136 yards on 33 carries for Illinois (7-2, 4-2), which saw a six-game winning streak snapped.

Tar Heels quarterback Drake Maye threw for two touchdowns and ran for a third score to lead his team to a narrow victory over the Cavaliers in Charlottesville, Va.

The Tar Heels (8-1, 5-0 Atlantic Coast Conference) came a step closer to wrapping up their second ACC Coastal title for the second time in program history. Maye threw for 293 yards, and Josh Downs recorded 162 of them on 14 receptions.

Cavaliers (3-6, 1-5) quarterback Brennan Armstrong threw for 232 yards and an interception.

Devin Neal ran for 224 yards and a touchdown as the Jayhawks rolled past the Cowboys in a key Big 12 Conference game in Lawrence, Kan.

Kansas quarterback Jason Bean passed for two scores and ran 73 yards for another. The win snapped a three-game losing streak for Kansas and assured that the Jayhawks (6-3, 3-3 Big 12) would play in a bowl for the first time since 2008.

The Cowboys (6-3, 3-3) were without starting quarterback Spencer Sanders, who was ruled out with an injury hours before the game. Garret Rangel got his first career start and passed for 304 yards and two touchdowns, but also uncorked three interceptions in the loss.

Tulane’s Tyjae Spears rushed for a season-high 157 yards and a touchdown as the Green Wave stayed atop the American Athletic Conference with a win against the host Golden Hurricane.

Michael Pratt completed 11 of 19 passes for 125 yards with TD tosses to Tyrick James and Shae Wyatt for Tulane (8-1, 5-0 AAC). He threw one interception. Shaadie Clayton-Johnson topped the 100-yard rushing mark for the first time with 106 yards on 14 carries.

Rodney Hammond Jr. ran for 124 yards and a touchdown to lead the Panthers to a home upset victory over the Orange.

The Orange (6-3, 3-2 Atlantic Coast Conference) struggled without the services of quarterback Garrett Shrader, who missed play with a concussion, and dropped a third consecutive game after climbing into the rankings with an undefeated record. Star running back Sean Tucker collected 19 yards on 10 carries.

MJ Morris, who was the third-string quarterback a few weeks ago, threw three touchdown passes as the Wolfpack defeated the Demon Deacons for a victory in Raleigh, N.C.

Darryl Jones caught two of the touchdown passes and Keyon Lesane had the other scoring catch for NC State (7-2, 3-2 Atlantic Coast Conference). The Wolfpack’s Christopher Dunn kicked field goals of 33, 51 and 25 yards. He had the game’s first and final points.

Wake Forest quarterback Sam Hartman threw two touchdown passes and was intercepted three times. But his 29-yard, fourth-down hook-up with A.T. Perry allowed the Demon Deacons to close within 27-21 with 6:54 remaining by completing a 99-yard drive. By the time the Demon Deacons (6-3, 2-3) got the ball back, Dunn had booted his third field goal and just 2:54 was left on the clock.

Mikey Keene threw three touchdown passes in place of usual starter John Rhys Plumlee to lead the visiting Golden Knights to a win over the Tigers for their sixth victory in seven games.

RJ Harvey paced the Golden Knights (7-2, 4-1 American Athletic Conference) on the ground with 151 rushing yards and a touchdown. Fellow running back Isaiah Bowser also threw a touchdown pass for UCF, which never trailed.