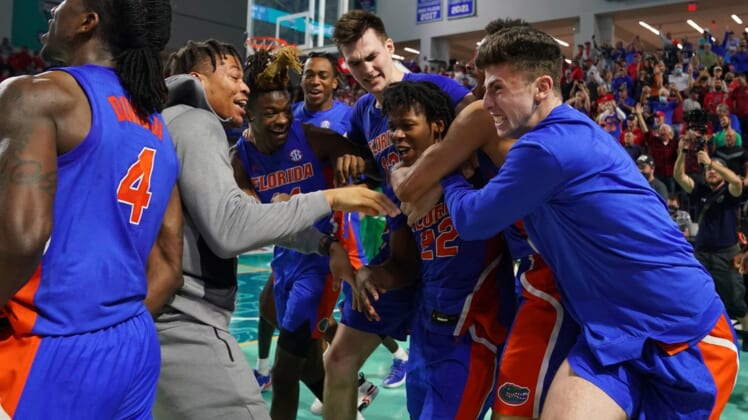 Tyree Appleby made a game-winning 30-footer at the buzzer as 23rd-ranked Florida rallied to defeat Ohio State 71-68 in the championship game of the Fort Myers Tip-Off on Wednesday night in Fort Myers, Fla.

Appleby had missed eight of his nine shots prior to that heave.

Florida (5-0) was led in scoring by Phlandrous Fleming Jr., who had 19 points off the bench. Ohio State (4-2) lost despite shooting 53.2 percent from the floor and holding Florida to 36.7 percent.

LJ Cryer had 15 points to lead the Bears’ balanced scoring in the opening round of the Battle 4 Atlantis at Paradise Islands, Bahamas.

Baylor (5-0) will play VCU in a semifinal game of the winner’s bracket. The Sun Devils (2-3) will play Syracuse in a consolation bracket game. Both games are Thursday.

Cryer, who came off the bench, was one of five Bears who scored in double figures. DJ Horne paced Arizona State with 20 points.

Timmy Allen and Andrew Jones scored 15 points apiece and the Longhorns’ defense all but eliminated scoring from beyond the arc for the second straight game in a win over the Lancers in the finale of the Abe Lemons Classic in Austin, Texas.

Texas limited California Baptist to just 16 points in the first half and 40.5 percent shooting overall. Courtney Ramey and Christian Bishop added 12 points each for the Longhorns (4-1), who forced 23 turnovers and had 33 points from its bench players.

DeAndre Williams scored 16 points and grabbed 10 rebounds, and the Tigers held the Hokies scoreless for more than four minutes down the stretch of a semifinal win at the NIT Season Tip-Off in New York.

The Tigers (5-0) will face Iowa State, which upset No. 25 Xavier 82-70 in the first semifinal, on Friday night for the tournament title. The Hokies (5-1) and Musketeers will play for third place in the first Friday game.

The Cougars took advantage of frigid first-half shooting by the Ducks and cruised to victory in the third-place game of the Maui Invitational in Las Vegas.

Te’Jon Lucas scored 18 points to lead the Cougars past the Tigers at Provo, Utah. BYU notched its fifth straight victory.

PJ Henry topped all scorers with 21 points for Texas Southern, which dropped its sixth consecutive game to open the season after making the NCAA Tournament last season.

Adama Sanogo scored a career-high 30 points to fuel the Huskies to a double-overtime victory over the Tigers in the quarterfinals of the Battle 4 Atlantis in Paradise Island, Bahamas.

Tyler Polley (24 points) sank two of his six 3-pointers in the second overtime and Sanogo added a trio of layups to push the Huskies’ lead to 109-100 with 1:01 to play. Auburn trimmed its deficit to four before UConn (5-0) sealed the win at the free-throw line.

Johnson finished with 27 points and Jabari Smith added 22 for the Tigers (3-1), who face Loyola-Chicago in the consolation round on Thursday. The Huskies will face Michigan State in the semifinals.

Eli Brooks scored 15 points as the Wolverines held off the pesky Texans in Ann Arbor, Mich.

Jared Rhoden scored 12 of his team-high 21 points from the free-throw line and the Pirates avoided an upset in the third-place game of the Fort Myers (Fla.) Tip-Off.

Yetna and Tyrese Samuel added 10 points apiece for Seton Hall (4-1). Yetna and Rhoden each grabbed seven rebounds. Cal got 23 points from Andre Kelly and 15 from Anticevich.

Izaiah Brockington scored a career-high 30 points to lead the Cyclones to an upset victory over the Musketeers in the NIT Tip-Off in New York.

Brockington scored 23 second-half points and converted 12 of 19 shots from the field and 4 of 6 3-point attempts. Tyrese Hunter added 19 points and Gabe Kalscheur chipped in with 12 points and five rebounds for Iowa State (5-0).

Xavier (4-1) made just 3 of 21 attempts from beyond the arc after it sank 14 of 31 against Norfolk State on Sunday. Jack Nunge led Xavier with a career-high 24 points.