Forward Drew Timme scored a career-high 25 points on 11-of-15 shooting as top-ranked Gonzaga opened its season with a 102-90 victory against No. 6 Kansas. 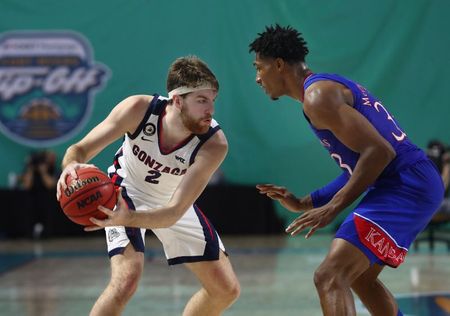 Forward Drew Timme scored a career-high 25 points on 11-of-15 shooting as top-ranked Gonzaga opened its season with a 102-90 victory against No. 6 Kansas on Thursday afternoon at the Fort Myers Tip-Off in Florida.

Freshman Jalen Suggs, a top-10 prospect who is Gonzaga’s highest-ever recruit, scored 24 points and had a game-high eight assists. Corey Kispert, a preseason All-American, added 23 points for the Bulldogs, who will play Auburn in the tournament Friday.

Kansas and Gonzaga finished last season ranked Nos. 1 and 2, respectively, in the polls, but a potential showdown in the NCAA Tournament was dashed when the tournament was called off because of the coronavirus pandemic.

Sophomore Jeremiah Robinson-Earl scored a career-high 28 points on 11-of-17 shooting to lift the Wildcats past the Sun Devils in the championship game of the 2K Empire Classic in Uncasville, Conn.

Preseason All-America guard Ayo Dosunmu collected 22 points and seven assists to lead a balanced effort in the Illini’s triumph over the Cougars in Champaign, Ill.

Kofi Cockburn added 14 points and 11 rebounds for the Illini, who won by at least 59 points for the second time in as many days at the Illinois multi-team event. Illinois (2-0), which posted a 122-60 win over North Carolina A&T on Wednesday, faces Ohio on Friday afternoon.

Derek Culver collected 23 points and 15 rebounds to lift the Mountaineers to a victory over the Rams in the semifinals of the Bad Boy Mowers Crossover Classic in Sioux Falls, S.D.

West Virginia junior Sean McNeil scored 16 points to match his career-high total set on Wednesday. Oscar Tshiebwe recorded 11 points and 16 rebounds for the Mountaineers, who will face Western Kentucky in the championship game on Friday afternoon. The Hilltoppers advanced to the final with a 75-69 victory over Memphis on Thursday afternoon.