The MLB market has been slow to develop, but players should be coming off the board in the next few weeks 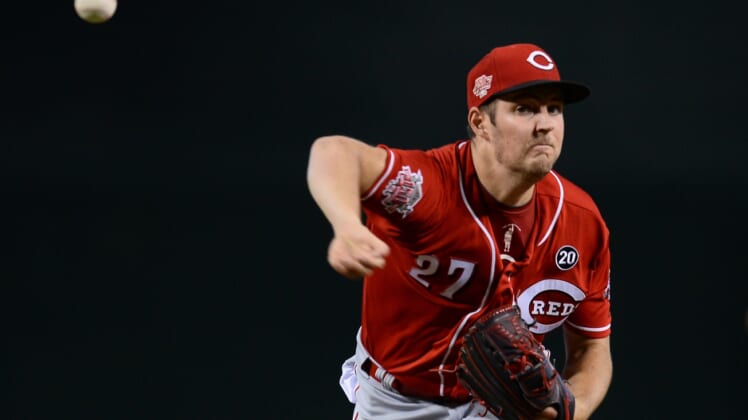 As we enter the 2021 season and get closer to spring training, the ice-cold stove should be starting to warm up as MLB free agents sign. Teams still have lots of holes on their rosters and the time to fill them is now, so January and February should bring lots of signings.

Here are the top 20 available MLB free agents, regardless of their position.

The reigning National League Cy Young award winner is hitting free agency for the first time in his career, and he’s making a big deal about it. Through his official Twitter account, he has been interacting with fans and flirting with teams all winter.

Bauer is the only bona-fide ace available in the market, and he’s going to be paid as such. However, he won’t get the $36M to $40M average annual value he is reportedly seeking. Several teams could use his services, most notably the Los Angeles Angels, the New York Mets, the Toronto Blue Jays, and the San Diego Padres, although the latter may be ready to drop from the Bauer sweepstakes after trading for Blake Snell and Yu Darvish.

Bauer’s deal may contain one or multiple opt-out clauses, as he has stated he would like to test the market again in the future.

Springer is the best MLB free agent outfielder in the market, a perfect blend of offense (134 career wRC+), defense (ranking in the 69th percentile in Outs Above Average, or OAA) and playoff pedigree. Two teams are said to be the finalists for his services: the New York Mets and the Toronto Blue Jays.

He also offers above-average speed and phenomenal plate discipline (11.1 career BB%.) His age will likely prevent him from getting a deal beyond the $200 million threshold, but he should easily surpass $100 million.

The premier catcher in the market, Realmuto is also the best in MLB at his position. He is still in his prime, he has a phenomenal bat for a backstop (.278/.328/.455 with 95 homers and a 109 wRC+), he knows how to call a game, is a highly respected figure around the game, and his framing is elite (95th percentile.)

Any contender would be lucky to land Realmuto. The Phillies are working to re-sign him, but others are in on him, too.

A premier bat with little defensive talent at this point, Ozuna was a monster in 2020, finishing with a 1.067 OPS and 18 home runs in 60 games. He would be an ideal designated hitter for a contending team.

So far, the Atlanta Braves, San Francisco Giants, New York Mets, and at least seven other teams have expressed interest in Ozuna, according to Rotoworld. He is about to become a very rich man in the next few weeks.

The Yankees’ leader in fWAR in each of the last two seasons, LeMahieu is a hot commodity in this free agent market. The Bombers are still the favorites to re-sign him. But if they can’t, several other clubs are interested in snagging him. The Toronto Blue Jays, Washington Nationals, New York Mets, and Los Angeles Dodgers have all expressed some degree of interest over the fall and winter.

LeMahieu, the reigning MLB batting champion with a .364 average, has an elite hit tool and is an above-average performer with the glove. Even at 32, he should land, at the very least, a lucrative four-year deal.

A model of consistency throughout his whole career, Tanaka finds himself in an uncomfortable situation. He would love to return to the Yankees, but their priority, even though it shouldn’t be, is re-signing DJ LeMahieu.

Tanaka’s preference seems to be signing with the Yankees or returning to Japan. However, he will consider other MLB teams in case the Bombers fail to step up with a worthwhile contract. He still has a lot left in the tank as a pitcher, and could make for a good number three or four for a contender.

Semien is probably not as good as his 2019 version (137 wRC+, 33 home runs, 7.6 fWAR) but he is probably better than the 91 wRC+ he put up in 2020. Yes, if you look at his career stats, the 2019 season seems like the outlier, but if you consider that the A’s shortstop was able to overcome a rough first couple of weeks of the 2020 campaign to finish with a 133 wRC+ the rest of the way (as Craig Edwards of Fangraphs explains), it is clear that he made some skill gains that are likely to stick. He is an above-average hitter now.

As far as his defense goes, UZR likes Semien (2.1 in 2020) but Defensive Runs Saved (DRS) and OAA hate him, with -5 and a 6th percentile ranking, respectively. Either way, he is a good, solid starting shortstop and will likely get a multi-year deal.

Hendriks is the best reliever in the market, and there’s no question about that. He has a 3.9 fWAR season in 2019, which is what a good starter normally puts. Considering that WAR is a cumulative stat, it was quite an impressive feat. Last season, he was well on his way to replicating the accomplishment, but the campaign only had 60 games.

Hendriks has it all: high-octane velocity, an elite strikeout rate, a microscopic walk rate, and a track record of excellence. His age and the uncertain market conditions will be the only things preventing him from getting a truly outrageous contract, but he’ll get paid anyway.

There is no better left-handed reliever available in the market than the dependable Hand. Yes, he was battered by the Yankees in the Wild Card series, but he was excellent in the regular season and has been elite his entire career.

The usual suspects (Mets, Blue Jays, Dodgers) plus the Chicago White Sox are reportedly in on Hand, and for good reason. He will move the needle for any contending club that decides to do what the Indians didn’t: pay him.

The 36-year-old Turner, who resurrected his career with the Dodgers after being non-tendered by the Mets a few years ago, is seeking a four-year contract. It’s somewhat difficult to believe that someone will bet on him remaining excellent until his forties, but a two or three-year deal isn’t out of the question.

It was surprising to see the Reds become sellers and cost-cutters, but here we are. They decided that Bradley wasn’t worth the approximately $5 million he was due on arbitration and non-tendered him. Other teams should be very happy about the decision.

Ever since the Arizona Diamondbacks shifted Bradley to a relief role on a permanent basis in 2017, he has never had a season with an ERA or FIP above 4.00. He strikes people out (career 9.28 K/9), is consistent, and set a career-low in bases on balls per nine frames, with 1.47, in 2020.

In upside alone, Yates has the potential to be the best reliever in the free agent class, even better than Hendriks or Hand. Much was expected from him in 2020 after his otherworldly 2019 campaign (1.19 ERA, 14.98 K/9) but he suffered from elbow issues and was limited to 4.1 frames.

He is now reportedly looking for an incentive-laden one-year deal around $5 million. After having season-ending surgery in August to remove bone chips from his right elbow, he is expected to be fully healthy come spring training. Some team could hit the jackpot if he returns to form.

Known for his disciplined approach and his excellent contact skills, Brantley is probably one of the best pure hitters in this free agent class, comparable with DJ LeMahieu in offensive talent.

Bradley isn’t a particularly talented hitter. After all, his career wRC+ is a mediocre 93 (meaning he has bee, to this point, seven percent worse than the average.) However, the team that signs him won’t do it because of his bat.

Bradley jr. has a game-changing glove in a premium position, center field. He is known for his circus catches out there, and the numbers back it all up: he finished as the fourth-ranked player in OAA, with seven, and is a Gold Glove award winner. He will be a nice consolation price for a club that misses out on Springer, as long as it doesn’t expect offensive excellence.

Another defensive wizard, Simmons has four Gold Gloves in perhaps the most difficult fielding position. His elite defense and his league-average offense (to this point, it has actually been a hair below-average, with 91 wRC+) make him a very valuable player.

He would make sense for the Yankees if they fail to re-sign LeMahieu, shifting Gleyber Torres to second. However, there are no clues about his future plans. The Blue Jays (yes, again) have shown interest, the Reds are looking for a starting shortstop, and the Angels could theoretically bring him back, so Simmons’ options are still wide open.

Each year, we prepare for a hypothetical Nelson Cruz decline, and each year, he puts those ideas to rest. A .303/.397/.595 season with 16 dingers (in 53 games) at age 40 is insane, and Cruz is said to want a two-year deal. He certainly has earned it, but under this financial climate, it’s unclear whether he will get it or not.

Dialogue between Cruz and the Twins hasn’t been all that fluid recently, but both sides should be able to work out an agreement for him to return to the place he has been so successful in the last two seasons. If they don’t there will be plenty of suitors for his game-changing offensive talent.

Free agency didn’t come at the best of times for Paxton. A dip in velocity and a left flexor strain derailed his last season with the Yankees. Teams are scared by his age, the location of the injury, and the velo decline, but in a recent workout, the southpaw was able to touch 94 miles per hour. It’s not quite the 95-plus he has averaged, but it’s progress.

Even though the Yankees clearly need pitching and is considered a priority this offseason, there haven’t been many signs that indicate they will make a run at trying to bring back Paxton.

Despite the things working against him in this market, a team should be offering Paxton the chance to rebuild his value with a lucrative, perhaps incentive-laden one-year deal. If healthy, the Big Maple can be an effective number two starter in a contending rotation.

Odorizzi expects to land a three-year contract in the $36 million to $42 million range. It seems a tad lofty after he showed nothing in an injury-marred 2020, but he will surely get paid as one of the best righties in the free agent class.

The team that signs Odorizzi (the Boston Red Sox and New York Mets have shown interest) doesn’t need to surrender a draft pick, since the 30-year-old already took a qualifying offer last offseason.

At this point of his career, Gregorius is seen as an above-average performer both offensively (116 wRC+ last season) and defensively (0.4 UZR, 2.8 Fielding Runs, per Fangraphs.) However, Statcast disagrees.

He was in the bottom 8% of the league in hard-hit rate with 27.9, while also finishing in the bottom third in average exit velocity, expected Weighted On Base Average (xwOBA), barrel percentage, and expected slugging percentage. Additionally, Statcast doesn’t like Didi’s glove, having him in the 20th percentile in OAA.

Gregorius will hit his home runs, but is a very divisive player and MLB general managers know it.

Osuna became an MLB free agent after the Astros put him on outright waivers in late October. He struggled with a right elbow injury that could eventually require Tommy John surgery, but for now, the flame-throwing reliever is opting for the rest and rehab route.

It could all blow up in his face, or he could regain his form and retake his place as one of the best relievers in the league. Either way, if he opts to keep pitching and avoiding the surgery, and if he shows something in spring training, some team could be open to take a one-year chance on his upside.