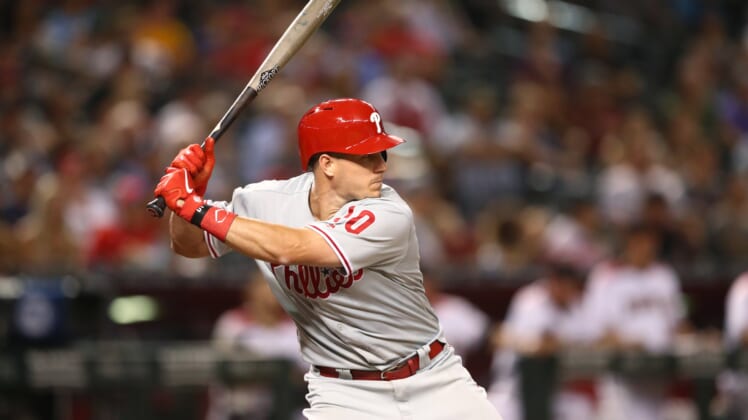 Now that Philadelphia Phillies catcher J.T. Realmuto has gone through MLB’s arbitration process for the final time, the All-Star catcher has grabbed his bat and took some swings at MLB’s ‘outdated’ system for deciding player contracts.

Realmuto, who filed for a $12.4 million salary for the 2020 season, learned on Thursday that the independent arbitration panel sided with the Phillies’ offer of $10 million for the upcoming season. Coming off an outstanding season that saw the 28-year-old wub a Gold Glove Award and be named All-MLB First Team, Realmuto blasted the arbitration process for how it treats catchers.

“It’s so outdated. THere’s a separate catchers’ market. THat’s what the team’s main case was on, that you can’t go outside of the catcher market.” Realmuto said, via The Philadelphia Inquirer. But if you line my numbers up with position players, that’s where our figures game into play.”

Realmuto went to arbitration hoping to create change within the system at his position, arguing that his numbers in 2019 stack up with players at other positions. Not only is he outstanding defensively behind the plate, Realmuto also hit 25 homers with 83 RBI and a .275 batting average.

Yet when the time came to face his own team in the arbitration process, where the Phillies argued against his merits, they took the approach to keep his salary within the restrictions of the market for catchers.

“It’s never happened before where catchers go out of the catchers’ market. But it’s not in the rules that says you can’t,” Realmuto said, via The Philadelphia Inquirer. “The team knows that they had a pretty strong case just for that and they took advantage of it.”

Milwaukee Brewers star closer Josh Hader, who also lost his arbitration case, blasted the arbitration process for similar reasons. As more players go through the process and the MLB CBA draws closer to expiring, it could be a major point to address in future negotiations and a matter players want to resolve.