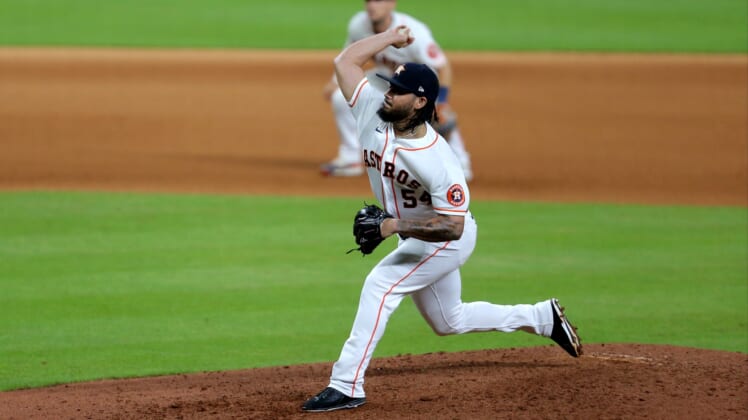 Houston Astros closer Roberto Osuna was placed on outright waivers Thursday, beginning what could be a turbulent MLB offseason for players across the league.

Facing an estimated $8.3 billion debt, Major League Baseball and its team are expected to drastically reduce operating costs this offseason. As part of the effort, thousands of employees have been let go and now many MLB players are starting to feel the effects.

Osuna, who suffered a significant elbow injury this season, was advised to undergo Tommy John surgery. While he is attempting to rehab the UCL injury in his pitching elbow, instead of getting TJS that would sideline him until 2022, the decision to move on was easy for the Astros.

As reported by The Athletic’s Jake Kaplan, the Astros will move on from Osuna and his projected $10 million salary for the 2021 season. The 25-year-old reliever will go through waivers before becoming a free agent.

It’s a dramatic fall for the 2017 All-Star selection and 2019 AL saves leader. The Astros acquired him at the MLB trade deadline in 2018, landing him at a discount after he served a 75-game suspension for allegedly assaulting a woman in Canada.

During his first full season with the Astros, Osuna recorded 38 saves with a 0.87 WHIP, 2.63 ERA and 73 strikeouts across 65 innings. When the postseason rolled around, he was a disaster.

It’s still likely that Osuna will eventually undergo Tommy John surgery, given the low success rate of pitchers taking the rehab route for UCL injuries. Given the immense medical red flags and his off-field history, Osuna likely will have to settle for a two-year contract with a low base salary.