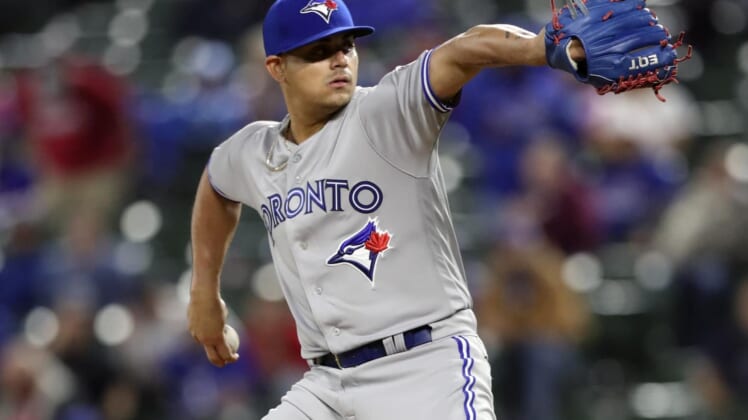 Even after the Houston Astros acquired reliever Ryan Pressly, the team sought a closer before the deadline. Now they’ve found one, reportedly agreeing to a deal to land Roberto Osuna from the Toronto Blue Jays.

Source: #Astros get Osuna from #BlueJays.

The 23-year-old reliever is in the midst of a 75-game suspension for violating MLB’s Joint Domestic Violence, Sexual Assault and Child Abuse Policy. His suspension came months after he was charged with assaulting a woman in May.

Osuna is eligible to return on August 5, so he will soon be able to join the Astros’ bullpen once he finishes his rehab assignment in the minors.

From a talent perspective, there is obviously a lot to like from Houston’s perspective. In 2017, Osuna recorded a 3.38 ERA, 0.86 WHIP and converted 39 saves for the Blue Jays. He excelled even greater before that with a 2.63 ERA and 157 strikeouts in his first 143.2 innings with Toronto.

While it will be viewed as a major addition for Houston’s bullpen going forward, the organization will face significant scrutiny and questions over trading for a player charged with assault.

He also is under team control for the following two seasons via arbitration, which will give Houston a long-term solution its issues in the ninth inning.

However, Toronto was seeking to move Osuna because of his arrest and suspension for assault. The Blue Jays wanted to move on from him and now successfully have.

According to Ken Rosenthal, Toronto will receive relief pitcher Ken Giles as part of the deal from Houston. The 27-year-old, who started the season as the Astros’ closer, was sent down after repeated disastrous performances out of the bullpen.

He still offers plenty of talent, though has struggled even in the minors with nine hits and five runs allowed in 5.1 innings. Given the Blue Jays were able to trade away Osuna though, the organization likely views this as a win.