Jimmy Walker edged Jason Day to win the 2016 PGA Championship on a rain-soaked course at Baltusrol, winning his first major in dramatic fashion.

Jimmy Walker has done it! He holds off Jason Day to win the PGA Championship, his 1st major title. pic.twitter.com/PPfGEISx5v

Mother Nature had a lot to say about how the final two rounds were contested. But in the end neither rain nor thunder and lightning nor a poor logistical effort by the PGA (more on that later) could keep golf fans from enjoying a brilliant tournament from the world’s top golfers.

1. Years of toiling in mediocrity pay off for Jimmy Walker

It only took 13 years for Walker to earn his first major championship title. The 37-year-old golfer, who has toiled in the shadows for most of his career, pulled off a phenomenal performance this past weekend, winning the PGA Championship in wire-to-wire fashion.

Walker was pushed hard by Jason Day, who couldn’t quite do enough to overcome his weekend rival.

“There was nothing easy about the day — really about the week, for that matter,” Walker said, per the Associated Press. “Especially coming down the last hole.”

The wonderful thing about golf is that, while it’s often seen as a young man’s game (on the PGA Tour, at least), many players have emerged later in life to play their best golf. This is certainly the case for Walker, who didn’t even win a single tournament on the PGA Tour until 2014.

What makes Walker’s victory at Baltustrol all the more exciting is that he wasn’t having a great season, either. Heading into the PGA Championship, the veteran had registered fewer top-10 finishes (four) than missed cuts (five) and had been cut after the first two rounds the past two majors.

But none of that mattered for Walker at Baltusrol. He was simply brilliant, pulling off fantastic shot after fantastic shot on his way to a treasured win.

2. What’s with all the first-time major winners?

Walker’s win marked the fifth time in a row in which a major championship was claimed by a first-time winner.

It’s been quite a remarkable stretch. Before Day’s win last year at Whistling Straits, golf’s majors had been dominated by players who had already won for almost two years running, with multiple-major winners claiming eight of nine dating back to Phil Mickelson’s British Open win at Muirfield.

So much for the rise of the Big Three.

Because there is so much parity in men’s golf right now, it seems likely we’ll continue to see this trend of first-time winners continue in the years to come.

Don’t get us wrong, the likes of Day, Jordan Spieth and Rory McIlroy will almost certainly end up winning a few, but there isn’t a Tiger Woods-type character in the game anymore who will dominate in the fashion we got accustomed to seeing for so many years.

Despite not winning a major this season, you’d have to conclude that Day is still in line to win the PGA’s Golfer of the Year award.

With three wins, including a victory at THE PLAYERS Championship, eight top-10 finishes, 13 top-25 finishes and just one missed cut, Day has been a steady force on tournament leaderboards all season long.

His second-place finish to Walker is certainly disappointing, but Day didn’t lose the tournament so much as Walker won it.

Eagle for Jason Day on 18!
Jimmy Walker is now playing the final hole with a ONE shot lead. #PGAChamp https://t.co/5XNmojTnwR

“I’m a little disappointed, but you know what? At the end of the day, I came in here with not the greatest preparation,” Day said, via ESPN.com’s Bob Harig. “I’m very, very happy with how I played all week.”

First, it’s important to note that McIlroy’s season hasn’t been a disaster. Heading into the PGA Championship, he was unquestionably one of the hottest golfers in the field.

With that out of the way, it’s impossible to ignore his up-and-down performances at majors this season.

McIlroy finished in a tie for 10th place at the Masters and a tie for fifth place at The Open Championship. That’s the good.

Now here’s the bad: the Northern Irishman missed the cut at both the U.S. Open and PGA Championship. He also has just one top-three finish this year on the PGA Tour.

So what’s the problem?

“Right now he’s just so tentative through impact. He’s just not confident,” Phil Mickelson said of McIlroy’s putting stroke (h/t Philip Reid of the Irish Times). “You can just tell. You watch him with a driver and it’s the sweetest thing you can imagine. It just goes through effortlessly with so much speed and power, and the ball just flies so long and true with such a tight flight pattern. He’s just not striking his putts with the same confidence as he is his driver.”

Blessed with ridiculous talent for striking the ball, McIlroy must master his putting stroke if he’s to get back on track in the coming years.

5. What in the world happened to Dustin Johnson?

Speaking of hot golfers heading into Baltusrol, Johnson was on a ridiculous pace. He entered the tournament with six straight top-nine finishes, including two wins — one of which was at the U.S. Open.

Outside of Henrik Stenson, there was nobody hotter in the world. Johnson was thought by many to have the game to make minced meat out of Baltusrol, but the course ate him for breakfast and spit him out before the weekend.

Missing the cut wasn’t what Johnson, or anyone else, expected.

Even more shocking was that only 10 other golfers in the field managed to shoot worse scores than Johnson during the first two rounds. He exited the tournament with a score of nine-over par.

Just another reminder that golf is really, really hard. 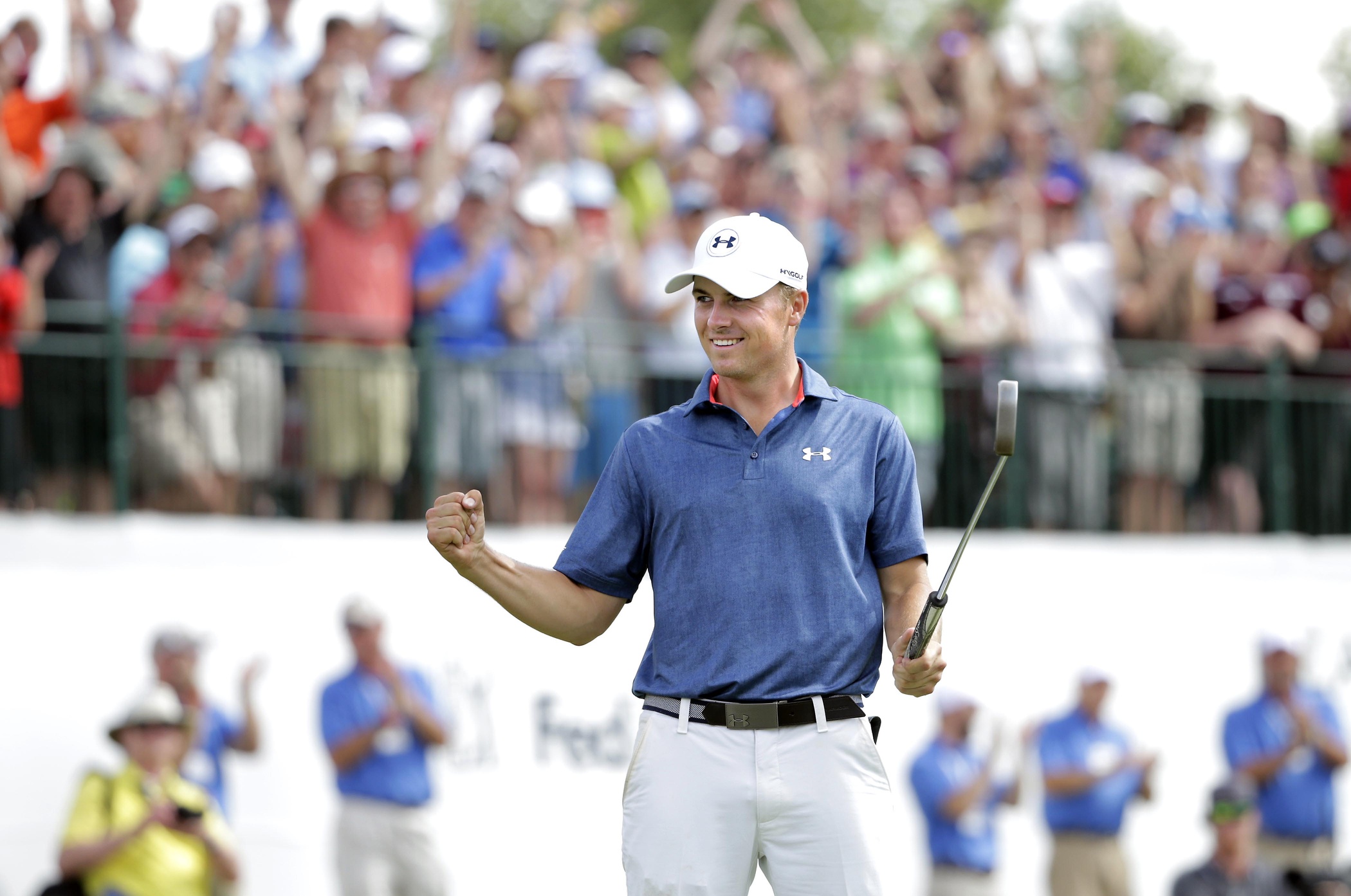 Okay, so this past PGA season hasn’t gone exactly according to script for Spieth, who absolutely dominated last year.

But it hasn’t been a bad season, either. In fact, if we’re looking at it objectively, without last year’s glaring brightness distorting our vision, it’s been quite successful. Spieth has won twice, has two other top-three finishes, six top-10s and 12 top-25s.

And let’s not forget this is still just a 23-year-old kid we’re talking about here. He’s motivated to continue grinding through any adversity that comes his way, as was clearly demonstrated by his salty responses from reporters at the British Open (more on that here).

He was a bit more chilled out after posting a tie for 13th place at the PGA Championship.

“I was a couple of swings away from winning the Masters. If I close that one out, it’s one of the best major seasons I’ll ever have,” Spieth said, per Gary Van Sickle of Golf.com. “I’m not going to hang my head low. I made the cut in all four, which obviously isn’t my goal. I contended in one and had a chance to win. I learned a lot from that experience. It wasn’t a bad showing in the four majors.”

Indeed. Spieth’s worst finish in the four majors was his tie for 37th at the U.S. Open. He was second at the Masters and kept himself in all four majors by grinding out pars when his putter failed him.

Despite not backing up his historic 2015 campaign with one to match it, Spieth remains one of the top young golfers in the world.

Taking a look at the leaderboard, it’s clear international golfers have just as much game as those in the United States. In fact, of those who placed in the top 10, seven hearken from regions outside the US of A.

Looking even deeper at the top finishers, 19 of the top 32 golfers in the field at Baltursrol were international players. That’s nothing short of international domination.

This is a trend that isn’t uncommon in majors of late. It’s going to be interesting to see if it continues next year.

8. Will we ever see another player dominate like Tiger Woods, Jack Nicklaus?

We touched on parity and first-time major winners already. What these aspects remind us of is the fact that there isn’t a single dominant golfer playing right now. We’ve seen golfers like Spieth, McIroy and Day have their runs, but all have been short lived.

Back when Tiger Woods was in his prime, the biggest question anyone had before major championships was, “Do you take Tiger or the field?”

Nowadays, it’s anyone’s guess who will win a major.

On one hand, it’s much more fun for spectators and analysts to enter a tournament with zero clue about the outcome.

On the other hand, there is a reason ratings were so high when Tiger was on top of the golfing world. Everyone loves to watch a winner dominate, or if they don’t, then they love to hate.

In reality, it’s hard to imagine we’re going to see another player dominate like Woods or Nicklaus before him in a long, long time.

They were once-in-a-generation players, and though Tiger isn’t playing these days, his successor isn’t in the conversation just yet.

A heckler found this out the hard way on Saturday.

Watson was in the middle of his swing when one rude fan shouted, causing the lefty to badly shank his shot.

Not only did the heckler get a vicious stare-down from Watson, but he also got destroyed by Watson’s caddie, Ted Scott, who was visibly ticked off and said, “why don’t you go back to your grandma’s basement.”

As much as we all loved Adam Sandler’s comedy classic “Happy Gilmore,” fans do need to be more respectful of the game.

Yelling out “Get in the hole!” and other things of that nature may seem like a great idea, but golf is hard enough without having to block out fans yelling while attempting to hit a precise shot.

10. PGA needs to be smarter about thinking ahead

It’s been a brutal year for decision-makers in major tournaments. The USGA absolutely botched things at the U.S. Open when it waffled on whether or not Dustin Johnson deserved a penalty — a decision it later regretted.

Then it botched things at the Women’s U.S. Open (more on that here).

To cap it all off, the PGA of America lost control of the tournament this past weekend when it failed to prepare for inclement weather over the weekend.

First off, the decision to not have golfers tee off from both the front and back nines on Saturday when thunderstorms were forecasted was unfortunate. It caused more stress on Sunday, when both the third and fourth rounds kicked off at the same time.

The real issue, though, was the fact that the final round was not done in such a way that the leaders were paired together. Instead, players stuck with their third-round partners, creating a disjointed final round.

It was amateur hour, which is simply unacceptable for a major championship.