As the NBA season crosses its midway point, we’ve already seen a lot of spectacular individual performances. Just how good has Jimmy Butler been in his first season with the Minnesota Timberwolves? Is LeBron James having the best season of his career?

And remaining back east, James’ ex-teammate, Kyrie Irving, is turning in a tremendous campaign. These are among the top-10 NBA MVP candidates as the season hits its second half. 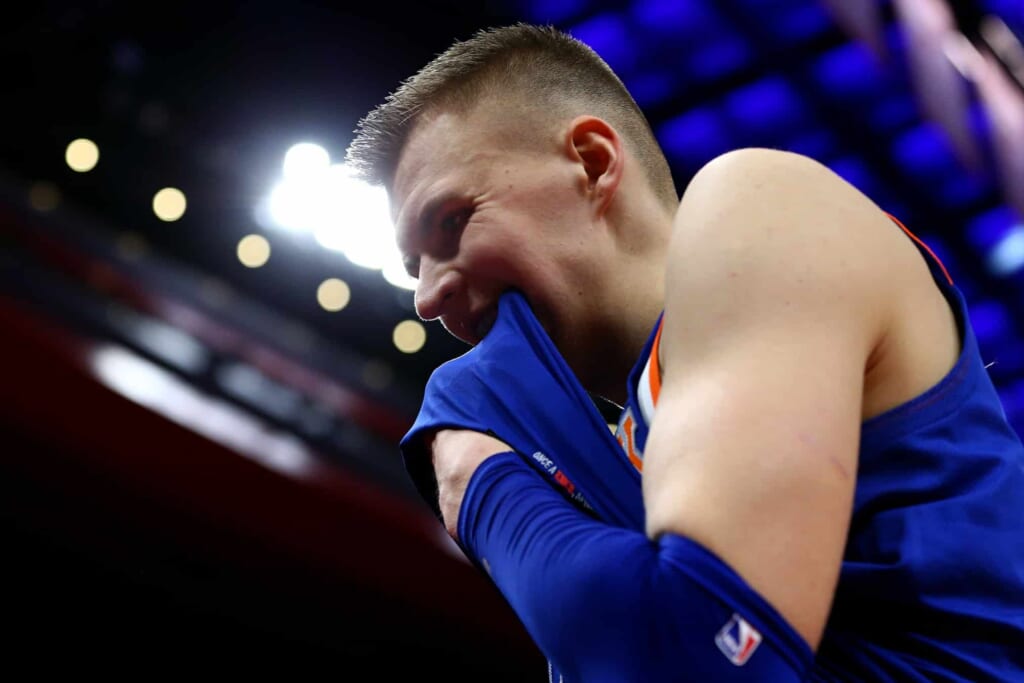 The Knicks will have to make a push for a top-five seed or simply a playoff spot if Porzingis is going to get any real play for the MVP. But what this third-year big has done in taking over ownership of the previously struggling franchise is nothing short of extraordinary.

He enters Thursday’s action averaging 23.7 points, 6.7 rebounds and 2.3 blocks while boasting a win shares of 2.8 for a team that has surprised the masses to a tune of a 19-22 record. Porzingis might not be a legit MVP candidate this season, but his time is surely coming.

This has to be sweet music to the ears of Pacers fans the world over. Oladipo has quite simply outplayed the man he was traded for, Paul George. The 25-year-old former No. 2 pick has just been splendid for his new team in 2017-18. Oladipo is averaging career highs in points (24.6), rebounds (5.3) and assists (4.1). He’s shooting at a tremendous 49 percent form the field, including a 41 percent mark from distance.

More than basic stats, the guard has proven to be among the most valuable players in the Association. Indiana is shooting at a better clip while yielding a much lower field goal percentage with Oladipo on the court. He also ranks ninth among NBA players in efficiency this season. No wonder Indiana enters Thursday’s action in playoff positioning back east. 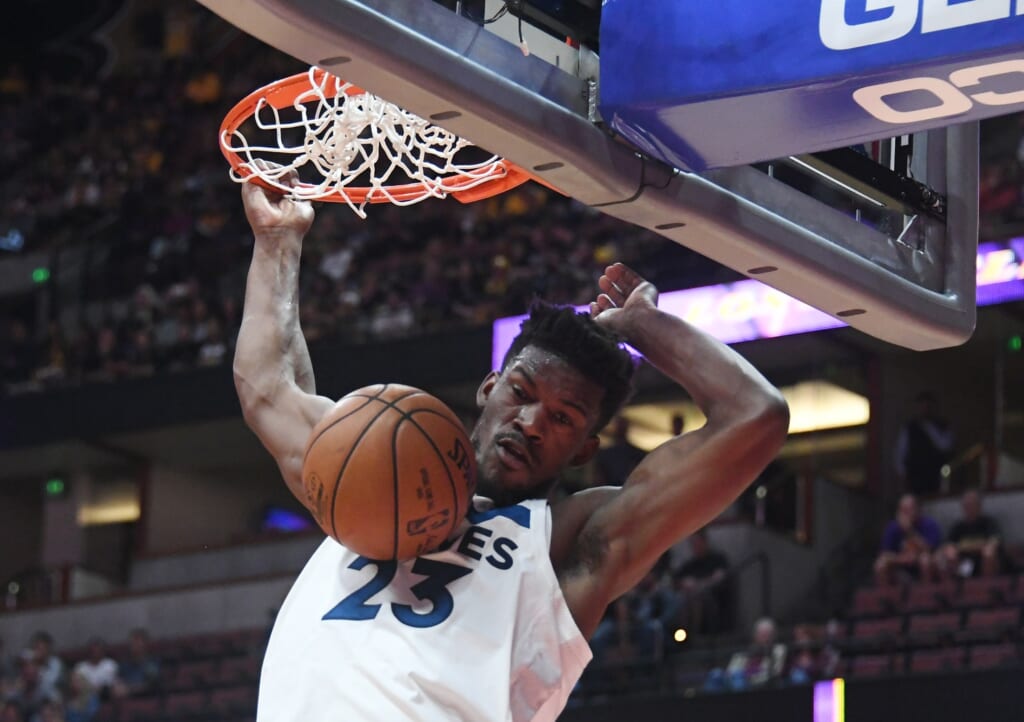 Primarily due to nagging injuries, it took Butler a bit to get his hold in Minnesota. But over the past several weeks, he’s been among the best two-way players in the game. For fans in Chicago, this isn’t necessarily a surprise. It’s just new to those in the Great Lakes, as they haven’t seen a player of this ilk since Kevin Garnett in his prime. Sure that’s a pretty big comparison. But Butler has definitely earned his stripes.

The All-NBA performer is averaging 26.3 points, 4.8 rebounds, 6.0 assists and 2.0 steals over the past 13 games. Showing his elite defensive makeup, the usually laxed Wolves are yielding a .524 effective field goal percentage with Butler on the court compared to a .573 mark with him on the bench. All of this has helped Minnesota finish the first half of the season as a top-four seed in an ultra-competitive Western Conference.

Durant is a bit lower than he should be. The reigning NBA Finals MVP has missed multiple games to minor injuries on the season, impacting his candidacy in a big way. But if he is able to turn in a completely healthy final half of the season, a second MVP is not out of the question.

Since joining the Warriors last season, Durant’s efficiency has jumped to all-time great levels. In 34 games this season, the forward is shooting at a 51 percent clip from the field, 41 percent mark from distance and boasts a .572 effective field goal percentage. He’s averaging 26.3 points, 7.0 rebounds and 5.2 assists per game. But what Durant continues to do on the defensive end is simply remarkable. He leads the NBA with 2.3 blocks per game and is right up there as a top Defensive Player of the Year candidate, as evidenced by a defensive wins shares equal to that of former DPOY candidate DeAndre Jordan.

Probably one of the most underrated players in the Association, DeRozan continues to make his impact known up north. Only this time, it’s coming for a Raptors team that could very well win the conference title during the spring. Toronto enters Thursday’s action with a 28-11 record, including a league-best 14-2 mark at home.

For his part, DeRozan is in the midst of the best season of his career on both sides of the ball. He’s averaging 25.3 points and shooting at a splendid 48 percent mark from the field. This includes the All-Star adding a three-point shot to his game, shooting 37 percent from distance. This all has DeRozan in line to be a legitimate under-the-radar MVP candidate as the season progresses. 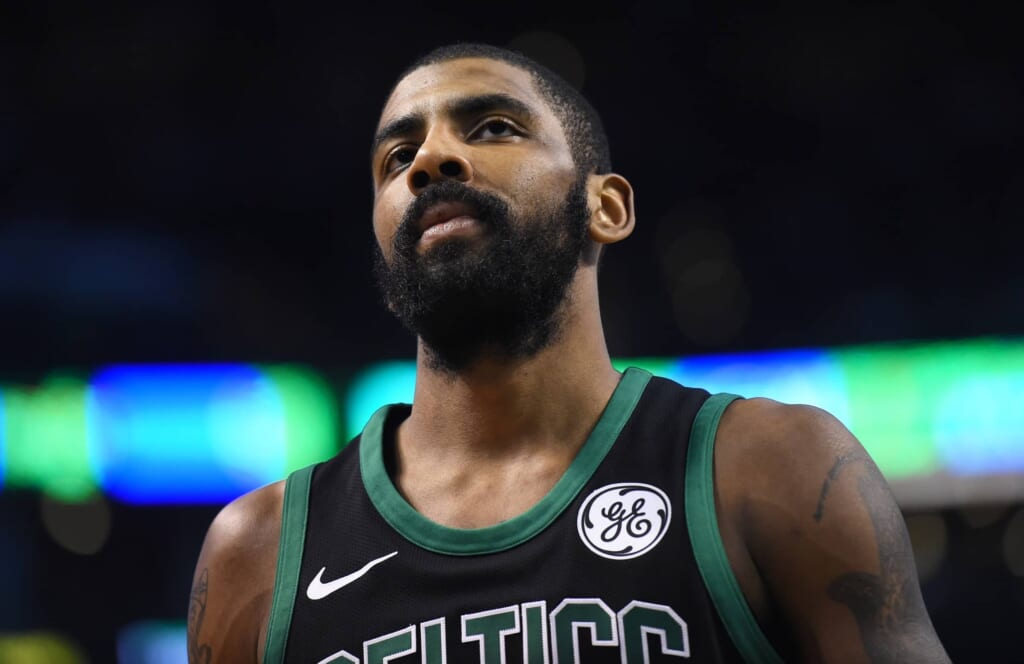 There was certainly some question as to whether Irving could be “the guy” on a contending team. And once Gordon Hayward went down in the season opener, that question was brought to light once more for this new Celtic. Since then, all Irving has done is dazzle onlookers with tremendous performance after tremendous performance.

Thus far on the season, Irving has dropped 30-plus points in 29 percent of his games and 20-plus points all but nine times. That’s a high level of consistency. Add in an average of 24.1 points to go with a 48 percent mark from the field and 39 percent shooting from distance, and one can easily conclude Irving has been one of the top-five players in the game.

It wouldn’t be an MVP top 10 without a man who has earned the hardware four times in his career. And while Cleveland has struggled to an extent with consistency, LeBron is arguably having the best season of his storied career. Here’s a dude that’s averaging what would be an eight-year personal high of 27.2 points per game while shooting at a 56 percent mark from the field. Heck, James boasts an absurd .609 effective field goal percentage. He’s also averaging 8.2 rebounds, 9.0 assists, 1.7 steals and 1.1 blocks per game. It really is something to behold.

More than basic stats, the argument in favor of King James winning his fifth MVP award is all about how valuable he is to the Cavaliers. Novice thought, right? The team boasts a .561 effective field goal mark with him on the court compared to .509 when James is resting. He’s also second in the NBA in win shares and second in overall plus-minus. Did we mention that despite their overall struggles, the Cavs still boast a top-six record in the Association? 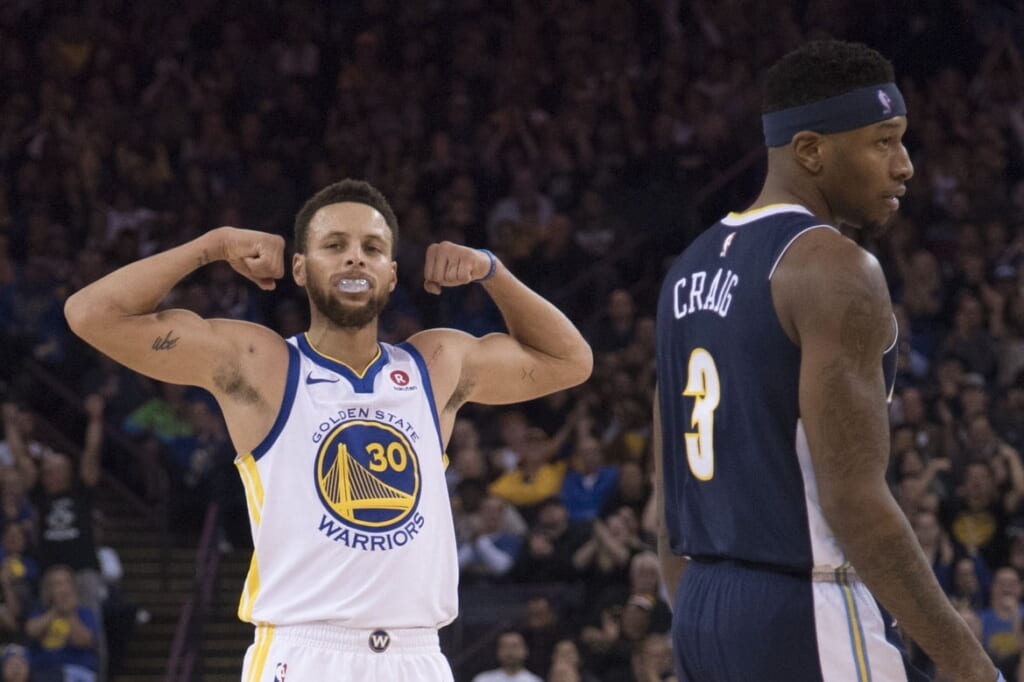 If it weren’t for the injury bug costing him 12 games earlier in the season, Curry would likely be either No. 1 or No. 2 on this list. He’s been better than ever this season. And in reality, that’s not good news for the rest of the NBA. Already a two-time champ and a two-time MVP, Curry heads a Warriors team that finished the first half of the season with the Association’s best record for the fourth consecutive season. That’s a feat no other team had ever accomplished prior to this season.

From an individual perspective, Curry boasts a 49 percent field goal mark and is putting up a .608 effective field goal percentage. He’s also shooting 59 percent from inside the three-point line. Add in 27.9 points per game to go with 5.2 rebounds and 6.4 assists, and his numbers are off the charts. Let us not forget Curry ranks in the top 10 in win shares, third in overall plus-minus, first in offensive plus-minus, fourth in offensive rating, fourth in player efficiency and second in true shooting percentage. Yeah, he’s pretty darn special.

In order for the Greek Freak to be considered a top-level MVP candidate, the team will have to finish in the top four back east this season. Anything short of that would likely limit him to second-tier status, primarily based on what we’ve seen from the top stars out west and LeBron James himself in this conference. But we’re fully expecting the Bucks to ascend the standings as the season progresses and Eric Bledsoe gets more comfortable in this system.

For his part, Antetokounmpo has done everything possible to be considered a first-rate MVP candidate. He enters Thursday’s action averaging 28.7 points, 10.0 rebounds, 4.6 assists, 1.6 steals and 1.3 blocks per game. He’s also shooting at a lofty 56 percent from the field. With a win shares that ranks him third behind James Harden and LeBron James, Giannis’ importance to a contending Bucks team cannot be overstated. 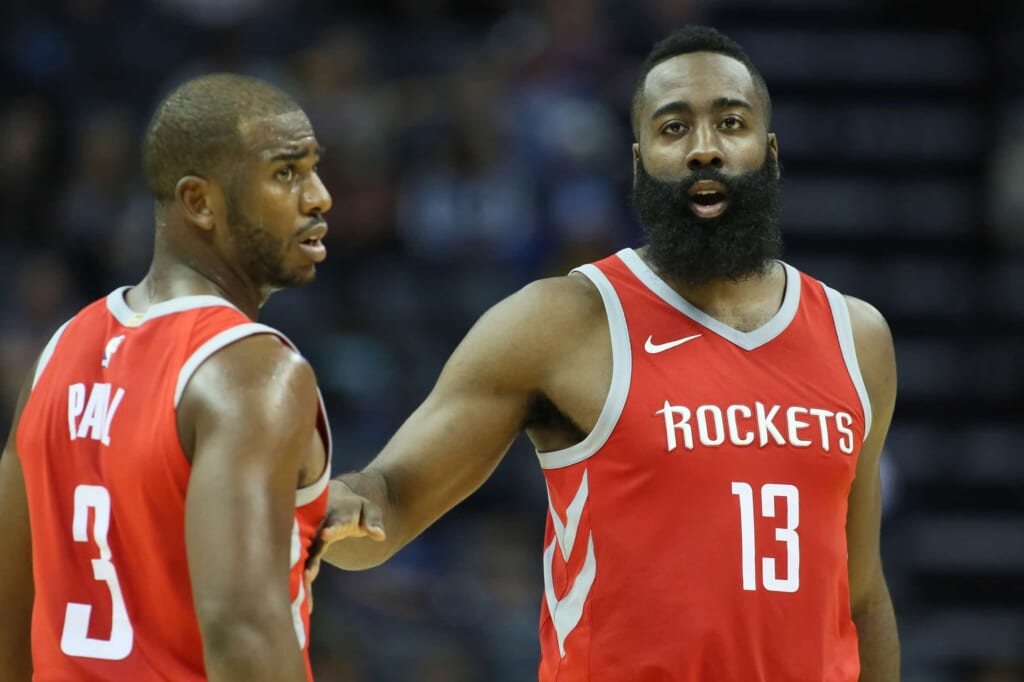 Much like Curry and Durant, an injury might dampen Harden’s MVP candidacy. At least, that’s what some might have us believe. That’s also until we realize just how darn dominant The Beard has been this season. Harden is averaging an NBA-best 32.3 points per game to go with 9.8 assists and 1.8 steals (yes, that’s a thing for him).

More than that, Harden is shooting at a five-year best 45 percent from the field and boasts a 55 percent effective field goal mark. Seen by some as a volume scorer, he’s also averaging 1.5 points per shot. To put this efficiency into perspective, James is averaging the same per shot on the season.

The one thing that might hold Harden (as well as Curry) back a bit is defense. He’s still one of the worst perimeter defenders among All-NBA performers. With the likes of James, Durant and Giannis being in consideration for DPOY honors, that could be an issue.