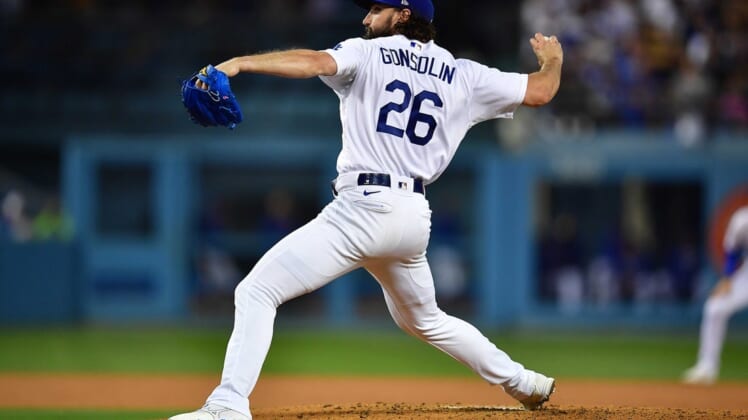 Mookie Betts and Justin Turner drove in runs to help Tony Gonsolin get the better end of a pitchers’ duel as the Los Angeles Dodgers earned a 2-0 victory against the visiting New York Mets on Thursday in the opener of a four-game series between first-place clubs.

Gonsolin remained unbeaten, improving to 6-0 in 10 starts while lowering his National League-best ERA to 1.59. The right-hander gave up two hits over six scoreless innings, with a walk and five strikeouts. He has not given up more than two earned runs in an outing this season.

The Dodgers’ victory came after they were swept in a three-game home series by the Pittsburgh Pirates.

The Mets finished with three hits against four Dodgers pitchers. Their six-game winning streak came to an end at the start of a 10-game Southern California road trip that also will include series against the San Diego Padres and Los Angeles Angels.

Mets starter Taijuan Walker, a Los Angeles-area native, gave up two runs on seven hits over 5 2/3 innings, with one walk and two strikeouts. Walker (3-1) matched Gonsolin with four shutout innings to open the game before giving up runs in the fifth and sixth innings.

The Dodgers finally got on the scoreboard in the fifth — on three consecutive singles, the last by Betts to score Chris Taylor.

Los Angeles made it 2-0 in the sixth when Trea Turner doubled and Justin Turner brought him home on a two-out double. Trea Turner extended his hitting streak to an MLB-best 25 games; he has two hitting streaks of at least 25 games in 103 contests since joining the Dodgers last season.

Brusdar Graterol pitched a scoreless seventh inning for the Dodgers, while Daniel Hudson pitched a perfect eighth and Craig Kimbrel earned his 11th save with a perfect ninth.

The Mets fell after consecutive shutout victories at home, when they outscored the Washington Nationals by a combined 15-0.