New England Patriots quarterback Tom Brady remains tight-lipped about Deflategate. However, something he isn’t shy to discuss via social media are his four Super Bowl rings. Brady posted this photo to his Facebook account with the following caption:

“These four rings stand for #Family, #Team, #Friends and @Patriots fans. Without the support of each one, none of these would be possible. I am truly grateful and blessed. What an incredible journey.” 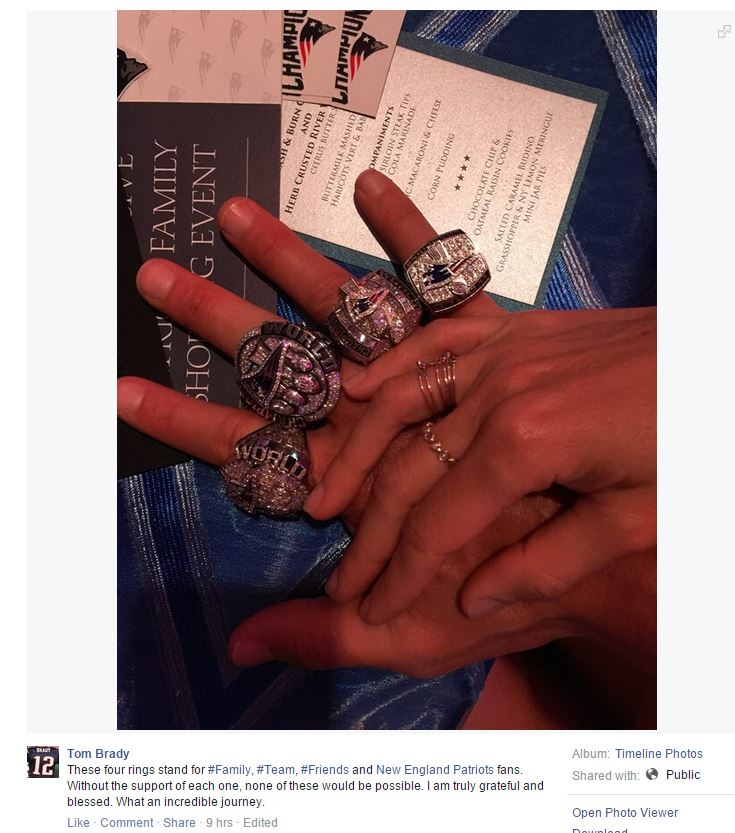 Ironically, the No. 4 also represents the number of games for which he has been suspended for the start of the 2015 NFL season.

Brady’s image and character have taken a royal beating over the past couple of months since the findings in the Wells Report were made public. The report links him to allegedly having knowledge of team personnel tampering with footballs used in the AFC Championship game.

After posting the picture to Facebook, thousands of Patriots fans showered the quarterback with love and respect.

Here are a couple of examples:

“You deserve every one of those rings!”

“Beautiful picture you shared. And even though Giselle’s hand is not in this other one, these FIVE rings, wedding band included, highlight that you value marriage and family life along with professional achievement. Class act all the way!”

As for everyone else who believes Brady is a dirty cheat, his post won’t do a darn thing to change their minds.

The next we will hear on the subject of Deflategate will be at Brady’s appeal hearing on June 23. We must wonder if Brady will show up with his fingers encased in diamonds when he reaches out to shake hands with the Commish.