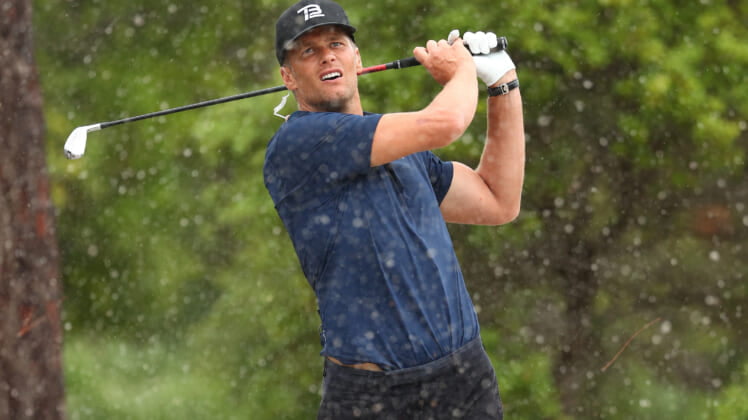 HOBE SOUND, FLORIDA – MAY 24: NFL player Tom Brady of the Tampa Bay Buccaneers plays a shot from the sand on the seventh hole during The Match: Champions For Charity at Medalist Golf Club on May 24, 2020 in Hobe Sound, Florida. (Photo by Mike Ehrmann/Getty Images for The Match)

Four of the most powerful figures in American sports took center stage Sunday during “The Match” and put on a show. For a few glorious hours, the only thing that mattered was Tom Brady and Phil Mickelson going at it with Peyton Manning and Tiger Woods.

It was pure joy.

Though, for a while there we were worried “The Match” wasn’t even going to happen. Mother Nature cranked up the drama with a torrential downpour that delayed the start nearly an hour.

Once the golfers finally got onto the course, things didn’t go smoothly at first.

Brady and Manning started out their rounds with brutal shanks. Immediately, the average American had a smile on his/her face relating to those first-tee jitters. Brady, who is arguably the greatest NFL player of all time, was downright awful for the better part of the first seven holes Sunday.

Then, he reminded everyone why he’s so great.

Brady’s magic stems from the fact that he does not get torn down by negativity.

When Charles Barkley roasted him for the umpteenth time Sunday and the audio mysteriously cut out for a few moments, Brady did what he always does in these circumstances. He mastered himself under pressure. And then he delivered a wedge shot that Phil Mickelson would have been proud to hit.

As if that moment weren’t amazing enough, Brady upped the ante. He split his pants on that shot, leading to some hilarious reactions on social media as the sports world went bonkers over the entire wild sequence.

Circling back to Manning, his best stuff came when he was talking. A natural comedian, Manning opened the day by roasting Brady on the driving range.

He also showed off some legitimately impressive shot-making skills throughout the afternoon.

Manning and Brady were the stars. Period.

It was incredible seeing Woods looking sharp again. And we can’t wait to see if he can stay healthy later this year when golf’s majors start taking center stage.

Mickelson was incredibly entertaining mic’d up, too. At one point he spent a couple of minutes explaining what he was going to do on a chip shot. Then he executed it brilliantly, nearly sinking the tough shot.

All the banter between the stars was amazing.

Justin Thomas, a PGA pro in his own right, spent the afternoon as a guest commentator. He and Charles Barkley put on an absolute clinic going back and forth with one burn after another.

From start to finish, “The Match” was must-see TV. It reminded us of all the great things sports provide. At a time in which pretty much nothing in our lives is normal, watching Tiger, Phil, Brady and Manning go at it on the golf course was exactly what we all needed. It was a reminder of better times. Times we hope we’ll get back soon.

And the best part? All this entertainment and fun led to an amazing outpouring of generosity. “The Match” raised millions for COVID-19 relief. An incredible event for a great cause.