Tampa Bay Buccaneers quarterback Tom Brady isn’t afraid to let the NFL knows what he is thinking, especially when it comes to things that decide things on the field. Days before the 2021 season begins, Brady called out the NFL for a rule that favors the Dallas Cowboys defense in Week 1.

The league passed new jersey rules this spring, allowing players more freedom to choose what number they wore on the field. Brady criticized the “dumb” change, which allows linebackers (1-59), defensive backs (1-49) and defensive lineman (50-79, 90-99) to select from a wide range of jersey numbers.

Many made the switch immediately. But three Cowboys’ defensive players are making the switch this week, leading to some anger from Brady at the competitive issue it might create just days before the NFL Kickoff Game.

In an interview with the Tampa Bay Times, Brady didn’t hold back on his criticism of the NFL’s relaxed jersey rule.

“The number rule is crazy. Literally, guys changed their numbers today. I’m playing two guys who had different numbers in the preseason. So, yeah you’ve got to watch film and know who you’re studying but so do running backs. They’ve got to know who to block. So does the offensive line. So does the receivers who are adjusting their routes based on blitzes.”

The players he is referring to are cornerback Trevon Diggs, linebacker Jaylon Smith and linebacker Micah Parsons. Diggs wore the No. 27 this summer and just recently unveiled he’ll wear No. 7 during the regular season. In addition, Smith switched from No. 54 to No. 9 and Parsons unveiled his No. 11 jersey.

A seven-time Super Bowl champion, Brady does make a point that these changes will have an impact on how teams prepare for games and how blitzing defenders are identified by offensive players.

Ironically, Brady’s criticism of the rule comes days after he went off on the NFL for instituting rules in recent years that penalized defensive players for mistakes made by those on offense. As an example, he pointed to Chicago Bears quarterback Justin Fields getting hit in the preseason and the defender being penalized. But the mistake was made by Fields, who didn’t see the oncoming blitz. 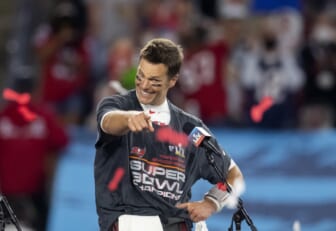 Brady raises some fair points about both rules and how the league keeps making these decisions without receiving input from veteran players. But that’s how the NFL operates and something tells us a few single-digit jerseys across from him won’t prevent him from having an MVP-caliber season.