When it comes to college football, we hear a lot about the same players. You know the names: Lamar Jackson, Saquon Barkley, Sam Darnold, and so on. Of course, there’s a reason we hear about them so often — they’re the best players in the country. But it’s time for some other guys to get their dues.

This list will focus on the players who make quiet contributions every week. The linebacker who makes 10 tackles, the safety who makes a game-saving pass breakup, the running back who went for 100 yards and a touchdown in a game nobody watched.

Dawson may not make highlight reels thanks to the bonkers finish in Florida’s victory over the Tennessee Volunteers. However, if not for his third quarter interception at the goal-line, the Gators would not have been in position to win with a Hail Mary in the first place. Had Tennessee scored, they would have taken a 10-6 lead in the game. Instead, Dawson intercepted Quinten Dormady, and the Volunteers never led in a game they ultimately lost.

If you’re a Cougars fan, you’re probably wondering why Martin is considered an unsung hero. After all, he had a massive day in Washington State’s 52-23 victory over Oregon State. However, not many people saw the game or paid attention to Martin’s insane performance. Those people should take a look at the highlights, as Martin went for 10 receptions, 194 yards and three touchdowns. That included a 57-yard score that put the game away in the third quarter. Next time you flip to a Cougars game, be sure to pay attention to Martin.

You could pencil in just about any Cowboys’ wideout other than James Washington for this slot. We went with Stoner over Jalen McCleskey and Marcell Ateman because he had the fewest receiving yards of the three. Of course, that’s all relative: Stoner still picked up 100 yards and a touchdown as Oklahoma State dominated Pittsburgh. Those 100 yards, by the way, were more than the redshirt freshman had in his entire career until today.

There’s credit to go around in the Tigers’ 48-45 win over UCLA, but some of it should go to Carter. It’s tough to say good things about a secondary that gave up 45 points, but the freshman had himself a game. Carter was credited with seven tackles and a defensed pass. He also had a fourth quarter interception of UCLA quarterback Josh Rosen, which kept Memphis in the lead. It came with the Bruins in the red zone and looking to take the lead. Carter prevented that from happening. 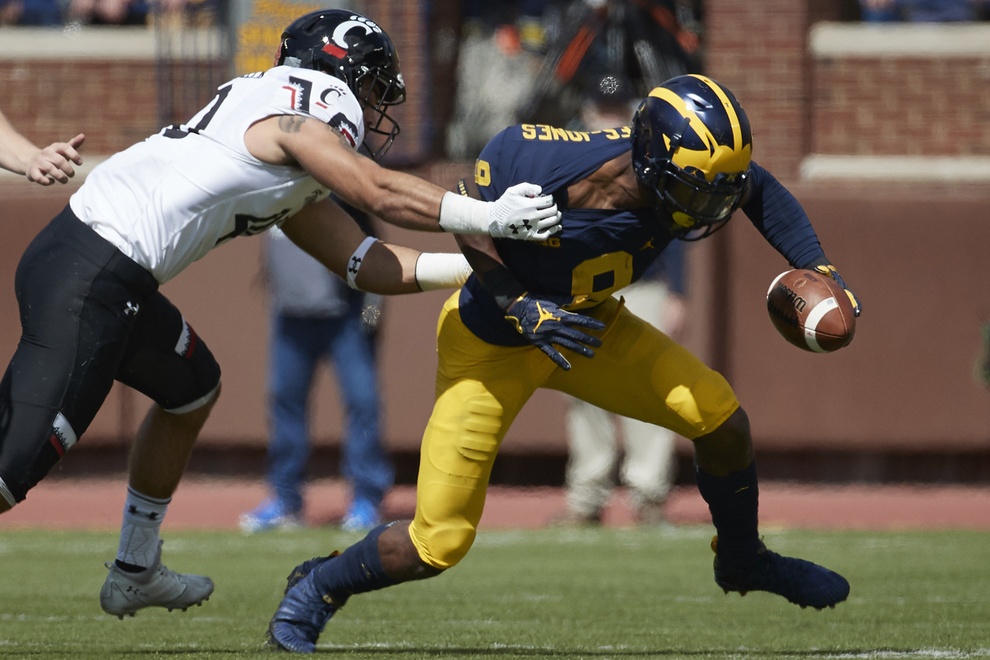 The Wolverines were on their heels Saturday afternoon against the Air Force Falcons. If not for Peoples-Jones, they may not have survived. The freshman wideout made just two catches, but he had a huge impact on the game. Most importantly, he returned a punt 79 yards for a key touchdown that put Michigan up by 10 early in the third quarter. Air Force could have easily taken a lead in the second half if not for that. Earlier in the game, one of his two catches went for 37 yards and helped set up a Michigan field goal. Considering how much the Wolverines’ offense struggled, Peoples-Jones’ contributions were invaluable.

After a 35-3 beatdown of the Missouri Tigers in Columbia, the Boilermakers feel like a favorite to replace UCLA or Tennessee in the top-25 this week. Brohm deserves all the credit. He has turned Purdue’s offense — one of the worst in the country last season — into a weapon of mass destruction. Last year, the Boilermakers crossed the 28-point threshold just four times. This year, they’ve reached it in each of their three games.

Much of the coverage of Northern Illinois’ defeat of Nebraska has focused on how badly the Cornhuskers have struggled this season. That’s understandable, but let’s not forget about the team that came into Lincoln as a massive underdog and won. Huff went for 105 yards and the touchdown that ultimately won the game for the Huskies. Remember his name.

Running back Aeris Williams will get much of the credit in the wake of the Bulldogs’ upset win over LSU. But the guy who was under center deserves some too. Fitzgerald may not be Dak Prescott, but he was the catalyst behind Mississippi State’s 37 points on Saturday night. Not only did the junior throw for 180 yards and two touchdowns, he also went for 88 yards and two scores on the ground. That ended up being more than the Bulldogs needed, as the defense held Louisiana State to just seven points.

Coney, a junior linebacker, posted an absurd 13 tackles in the Fighting Irish’s victory over Boston College. It should be pointed out that this win wasn’t as easy as the 49-20 score might suggest. Notre Dame was up by just one score until late in the third quarter. Coney’s contributions could have easily been the difference in Notre Dame staying in the game during a turbulent first half. His 13 tackles on Saturday nearly doubled the seven he had coming into the day.

The Ducks largely beat Wyoming on the ground, as running back Royce Freeman went for 157 yards and three touchdowns in a 49-13 rout. However, Mitchell led his team in both receptions and yards, going for six and 65, respectively. After a quiet first two weeks, this could be the beginning of a strong 2017 for Mitchell. The Ducks are looking for someone to establish himself as the No. 2 receiver behind Charles Nelson and Mitchell may have done just that. 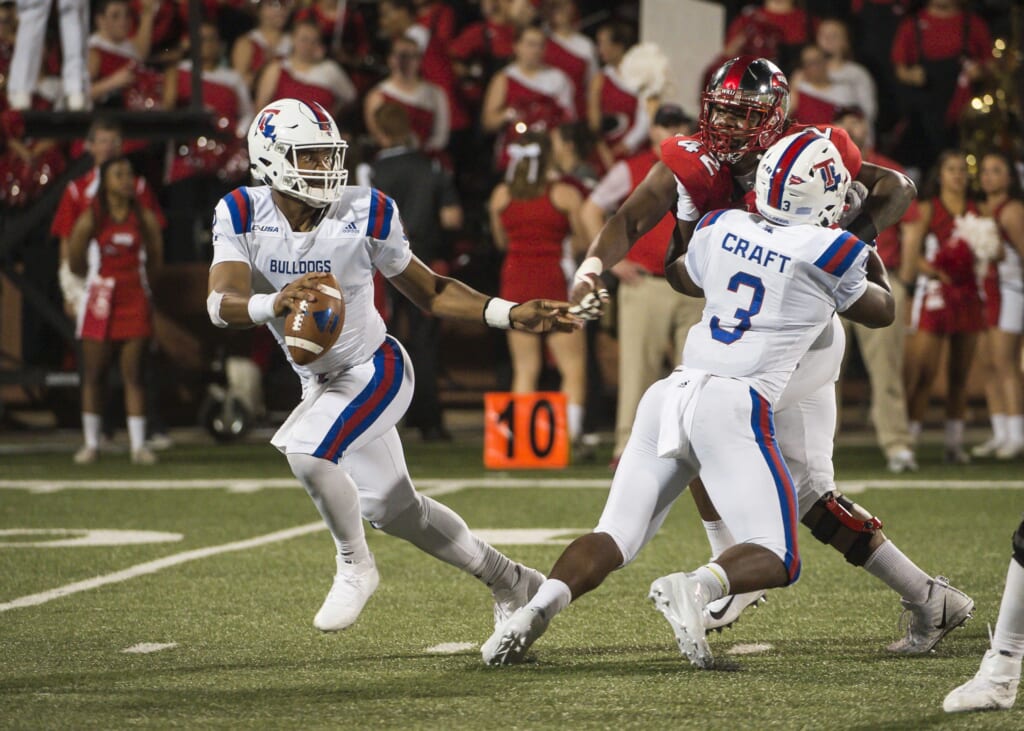 In a game you probably didn’t watch unless you’re a fan of either Louisiana Tech or Western Kentucky, Smith had himself a nice day. The redshirt sophomore and first-year starter threw for 306 yards and a touchdown against the Hilltoppers. He also led a game-winning drive as time ran down in the fourth quarter, culminating in a field goal from Jonathan Barnes to put the Bulldogs up 22-20. Louisiana Tech’s win over last year’s Conference-USA champion will surely give them a confidence boost and a leg up in the coming weeks.

Though the Hokies eventually regained their footing against East Carolina and won in a blowout, Virginia Tech was down 17-7 early in the game. East Carolina didn’t score a point the rest of the way and Motuapuaka was a big reason why. The senior linebacker had six tackles, including 1.5 for loss, and added half a sack on Saturday. On the year, he’s been an absolute machine as well. After Saturday, he has 26 tackles in just three games.

The Commodores’ upset win over Kansas State was mostly won on defense, as they held the Wildcats to just seven points. However, when it comes to the 14 points Vanderbilt put on the board, Sherfield should get some kudos. Though he didn’t get into the end zone, the senior wideout had four catches for 97 yards. That included a 32-yard catch which set up the game-winning score in the fourth quarter. It’s hard to make such a big contribution with just four receptions, but Sherfield certainly pulled it off.

As much as quarterback Kelly Bryant did in the Tigers’ 47-21 victory at Louisville, the run game should get its due. Etienne and Feaster — Clemson’s two leading rushers —  combined for 190 yards and a touchdown on just 16 carries. That’s 11.87 yards per attempt — complete and utter domination. It seems fair to say that Dabo Swinney has done a good job replacing Wayne Gallman after his departure to the NFL.