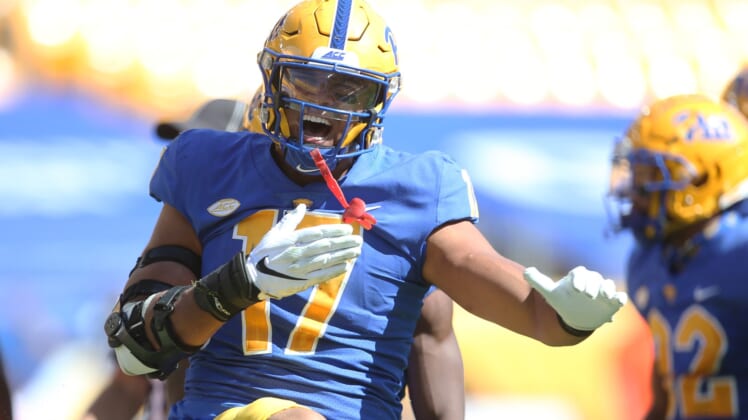 Tennessee Titans linebacker Rashad Weaver, who was drafted with a fourth-round pick in the 2021 NFL Draft, is facing an assault charge and accusations of punching a woman.

A woman filed a criminal complaint against Weaver on Friday in Pittsburgh’s magisterial district court, one day before the Titans drafted him with the No. 135 pick.

According to a police docket, the incident allegedly occurred on April 19. A witness told law enforcement that a large male, later identified as Weaver, punched a woman in the head. Officers were called to the scene and the woman was checked out by medical personnel then released.

One police officer who arrived on the scene wrote in the criminal complaint that he saw no injury consistent with a punch to the head. While one witnessed told police they saw Weaver punch the woman, another person on-scene said she did not see him punch the alleged victim.

The woman, identified as Demetria Navjelis, told officers on April 25 that she admitted herself to Ohio Valley Hospital on April 22 after vomiting. When she was examined by doctors, she said they diagnosed her with a concussion.

It all reportedly started at a bar, when Navjelis said she spilled a drink on Weaver. It led to an argument and was taken outside, where Navjelis accusing Weaver of then punching her.

According to the criminal complaint, Weaver told officers at the scene that he would have no problem hitting a female “if they needed it.”

The 6-foot-4 linebacker spent the past three seasons playing for the Pitt Panthers. He played in nine games last year, recording 14 tackles for loss and 7.5 sacks.

Weaver is scheduled to have a preliminary hearing on Oct. 5 at the Pittsburgh Municipal Court.