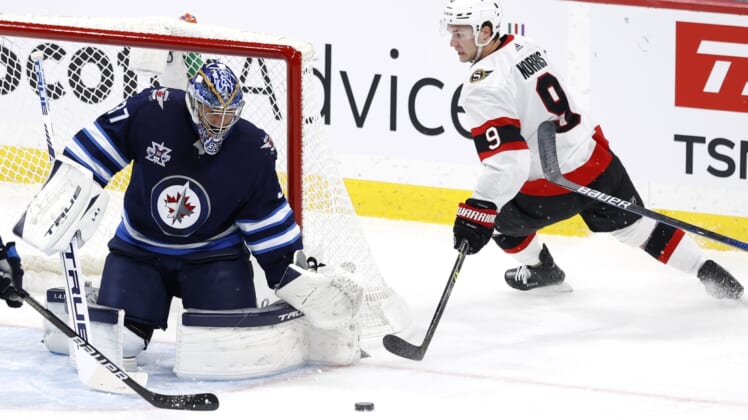 Tim Stutzle posted his first career hat trick to pace the visiting Ottawa Senators to a 4-2 victory over the Winnipeg Jets on Saturday, handing the hosts their sixth consecutive home defeat.

Connor Brown also scored and added two assists, while goaltender Filip Gustavsson made 27 saves for the Senators (22-27-5, 49 points). Ottawa, which has long been eliminated from playoff contention, is on an 8-1-1 run. After Sunday’s road game against the Calgary Flames, the Senators close out the season with a home game against the Toronto Maple Leafs on Wednesday.

Mason Appleton and Mark Scheifele scored for the Jets (28-22-3, 59 points), who have lost eight of nine games but remain in third place in the North Division. Goalie Connor Hellebuyck stopped 19 shots.

The Jets, who will likely face the Edmonton Oilers in the opening round of the playoffs but could meet the division-leading Maple Leafs if they keep struggling, will finish the regular season with a pair of home games against the Vancouver Canucks and then a home date with Toronto.

After a few quality saves by Gustavsson to keep the Jets off the board during an early push, Brown opened the scoring at the 10:13 mark with Ottawa’s second shot of the game. Brown parked in the slot and deflected Victor Mete’s point shot for his third goal in as many games and equaled a career best with his team-high 20th of the season.

Stutzle, the third overall pick in the 2020 draft, doubled the lead 76 seconds later on his team’s next shot. Hellebuyck’s clearing attempt was intercepted by defenseman Artem Zub, and his point shot was deflected perfectly by Stutzle.

Appleton put the Jets on the board 55 seconds into the second period to end a great shift, converting Scheifele’s pass for his first goal in 18 games, but Stutzle restored the two-goal edge 5:11 into the third period. A three-way passing play resulted in Stutzle set up in the right circle and he whipped a shot home. With a pair of assists, Ottawa’s Shane Pinto collected his first multi-point game.

Scheifele scored on a partial breakaway with 52.5 seconds remaining to again make it a one-goal game — his 200th career goal — but Stutzle’s empty-net goal for his 12th of the season quashed any comeback hopes.