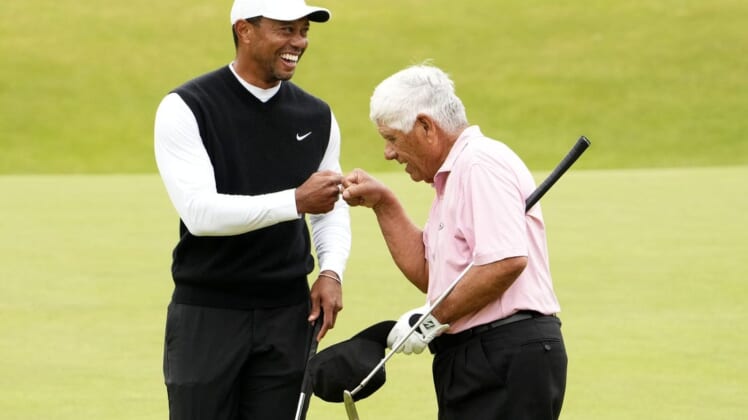 Tiger Woods will play with U.S. Open champion Matt Fitzpatrick of England and Max Homa in the first two rounds of The Open Championship this week at St. Andrews in Fife, Scotland.

It’s set to be Woods’ third major start of the year following his comeback from a gruesome single-car accident in February 2021 that left his right leg and foot badly injured.

Woods withdrew from the PGA Championship after the third round due to ongoing pain and skipped June’s U.S. Open in order to be ready for the 150th Open Championship, held at the historic venue where he won The Open in 2000 and 2005.

Fitzpatrick earned his first major title last month when he outlasted Will Zalatoris on the 72nd hole at The Country Club in Brookline, Mass., to win the U.S. Open at the same course he won the U.S. Amateur nine years prior.

Phil Mickelson and other golfers associated with the LIV Golf Invitational Series are set to tee it up at St. Andrews as well. Mickelson drew one of the earliest tee times in the first round — 7:30 a.m. local time, or 2:30 a.m. ET — and will play with Lucas Herbert of Australia and Kurt Kitayama.

In a group featuring multiple generations of big hitters, Bryson DeChambeau will go off with John Daly, who won at St. Andrews in 1995, as well as Cameron Tringale.

Jordan Spieth, Spaniard Jon Rahm and Harold Varner III will also be a featured group, teeing off directly after Woods’ group on Thursday and Friday.