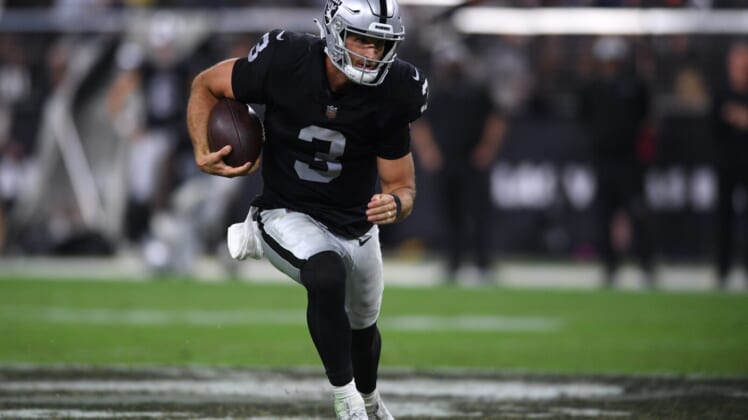 If there is one thing the Las Vegas Raiders have compared to other NFL teams, it’s depth at the quarterback position, even with a third-string quarterback Nate Peterman taking snaps.

On Saturday against the Seattle Seahawks, quarterbacks Derek Carr and Marcus Mariota did not play in the team’s first preseason game – with fans – inside Allegiant Stadium.

Instead, it was the Silver and Black’s third-string quarterback Nathan Peterman who got the start.

Peterman, who has been with the organization since 2018, played the entire game – minus one snap – and completed 29 of his 39 passes, en route to a 20-7 victory over the Seahawks.

In addition, he threw for 246 yards and only had one miscue, when he forced a ball that led to the lone interception during the team’s third drive in the second quarter.

Head coach Jon Gruden said Nate Peterman has grown over the course of training camp up until this point.

“I thought Nate Peterman has really shown some development on the practice field and carried it over to today with some long drives,” Gruden said. “I liked what he did.”

In the first half, every Raiders’ drive began inside their own 20-yard line and as far back as the 4-yard line, which was the Silver and Black’s opening possession.

That opening drive led to a one-yard touchdown by running back Trey Ragas but leading up to the play in the end zone, Nate Peterman found wide receiver Zay Jones not once, but twice on plays that went more than 20 yards.

The first connection came on a long pass for 28 yards on third-and-8 from their own 31-yard line to extend the drive and prevent a punting situation.

The second completion came on a 21-yard pass on second-and-7 from the Seahawks’ 25-yard line. It was a go-route for Jones, who was able to get separation from his defender.

Nate Peterman said he tries to get pass catchers, such as Jones, in situations to execute plays and to ignite the offense.

“He makes plays,” Peterman said of Jones. “Obviously, the second one (is) a go ball, a 50-50 ball. I’m just putting it out there for him to make a play. That was all him. It was awesome that he really sparked the whole offense, the whole team. Pretty awesome to see from him.”

The 27-year-old quarterback, who has a long history with Jones, dating back to their times in the 2017 Senior Bowl, said it is beneficial to have someone like him to throw to.

“It’s amazing to see where I and Zay have come in our careers,” Nate Peterman said. “I remember throwing to him in the Senior Bowl, getting drafted together, then obviously coming here together. It’s been amazing.

“He’s one of my favorite teammates, favorite person out there. He’s an awesome guy and a great friend, great teammate. It was fun to have some success with him on the field.”

Jones said he was fortunate that his chemistry with Peterman during training camp and the last few years was evident on Saturday.

“There’s definitely a lot of trust in that,” said Jones, who recorded three receptions for a team-high 57 yards. “We spend a lot of time together, so we definitely have a trust and a connection. It was able to be shown in the beginning of the game.”

The 6-foot-2 receiver said despite being the third name on the depth chart at quarterback, Peterman was able to effectively control the offense on Saturday night.

“Nate Peterman is a true professional,” Jones said. “He takes his job very seriously. He loves the game of football. He loves to compete at a high level. He cares for his teammates, and I know when he’s in the huddle or he’s out there on the field, he’s going to do the best that he possibly can. So, I have full confidence and trust in Nate when he is commanding the huddle.”

With a 74% completion rate, third-string quarterback Peterman said he always feels there is a chip on his shoulder when is steps onto the field, whether it is in Henderson, Nev. for training camp practice or at Allegiant Stadium.

“That’s kind of when I play at my best,” Peterman said. “Every time when you go out there – whether it is preseason practice or whatever it is – I’ve always got something to prove. That’s what it was (Saturday) and just happy to have some fun and get a win.”

Up next, the Raiders play its second preseason game against the Los Angeles Rams in Sofi Stadium on Aug. 21 at 7 p.m.