We are used to seeing Bernard Pollard on the field for the Tennessee Titans, but believe it or not he has more to offer than what he can do on the gridiron. The 29 year-old is also a businessman and inventor.

The 29-year-old defensive back is the inventor of the Smart Tray. Being a female myself, I absolutely respect this invention. According to Facebook, it’s a tray for your bathroom sink that “solves your problem by maximizing space and helps you stay organized.” I can relate with being unorganized getting beautiful for my day. I know, you probably look at me and think I wake up looking this good, but it does indeed require some work. I believe Pollard’s Smart Tray helps that big time. 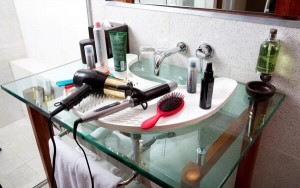 Pollard told Yahoo Sports that he created this tray to free up more counter space. There tends to be limited space in hotel bathrooms.

It wasn’t an easy invention to come by either.

Pollard said his first drawing of the Smart Tray “looked like a urinal thing you use in a hospital.” I speak for many women that I’m thrilled he did not stick with that design.

It took him four mock-ups to get the last one to perfection.

This isn’t the last of his inventions either.

It’s a special thing to find an athlete who is already prepared to have work (that is not involved in any sort of commentating) after he retires from a sport.

Pollard also says his business is a stress reliever during the strenuous grind of the NFL. You have to respect his work ethic. Very impressive.

Photo: courtesy of The Guardian