The sports world when man first landed on the moon 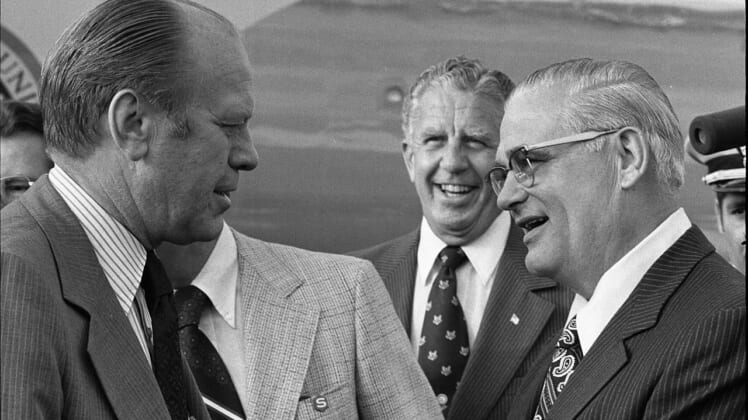 It was 50 years ago Saturday that mankind took one giant leap.

Neil Armstrong setting foot on the moon was the culmination of years of efforts from NASA, spearheaded by the forward-thinking ways of one John F. Kennedy.

In some ways it was a simpler time around the United States. In other ways, it was not. This wasn’t limited to the sports world, but 50 years ago was a completely different time.

Let’s look at what was happening in the sports world when man landed on the moon in 1969.

The legendary Woody Hayes led his Buckeyes to a perfect 10-0 record. The season culminated in a win over O.J Simpson and the USC Trojans in the Rose Bowl. Simpson himself went for 171 yards facing fellow future Hall of Famer Jack Tatum.

In just their eighth year of existence, the New York Mets shocked the baseball world by winning the World Series over the Baltimore Orioles. The little known Donn Clendenon, who led the league in strikeouts the previous season, earned World Series MVP honors. He hit .357 with three homers en route to helping New York to a 4-1 series in over Frank Robinson, Jim Palmer and Co.

Namath and the Jets were massive underdogs against the Baltimore Colts in Super Bowl III. The AFL was seen as the lesser of the two football leagues. Meanwhile, Johnny Unitas and Co. had dominated in the NFL. What followed was a 16-7 win. Matt Snell went for 167 yards, but it was Namath who earned the game’s MVP honors. He vastly outplayed fellow future Hall of Famer Johnny Unitas.

Game of the Century

1969 represented the 100th year of college football. It also gave us one of the biggest regular-season games in the history of the sport. It came in early December with No. 1 Texas taking on the second-ranked Arkansas Razorbacks. Then-President Richard Nixon was in attendance along with future President George H.W. Bush, then a congressman. After falling down 14-0 heading into the fourth quarter, Texas scored 15 unanswered points in the final stanza. It would ultimately defeat Notre Dame in the Cotton Bowl early in 1970 for the national title.

Four new MLB teams made their way into the league in 1969. In the National League, the San Diego Padres and Montreal Expos debuted. In the American League, it was the Seattle Pilots and Kansas City Royals. Two of these teams don’t even exist 50 years later. Montreal relocated to Washington and rebranded as the Nationals following the 2004 season. Meanwhile, the Pilots were an absolute joke of an organization and would become the Milwaukee Brewers after just one season.

Bill Russell, Wilt Chamberlain, Jerry West and Elgin Baylor. These were the future Hall of Famers that took on one another in the 1969 NBA Finals as the Celtics looked for their 10th title in 11 years against the Los Angeles Lakers. In the end, Russell and Co. came out on top in an epic seven-game set. Interestingly enough, Jerry West became a rare Finals MVP for a losing team.

1969 represented a time that saw America going through both the civil rights movement and the women’s rights movement. It’s in this that Crump making history as the first female jockey in horse racing made news around the United States. She rode a horse named “Bridle ‘n Bit” and took to the horseback at Hialeah Park Race Track in Florida.

During his tenure as the San Francisco Giants’ manager, Alvin Dark famously noted that a man would land on the moon before Perry, one of the game’s best pitchers, hit a homer. Dark was right. Armstrong stepped foot on the lunar surface mere hours before Perry took Los Angeles Dodgers pitcher Claude Osteen deep at Candlestick park. It remains one of the greatest moments in MLB history.