The Prescription for Raiders Offensive Flu 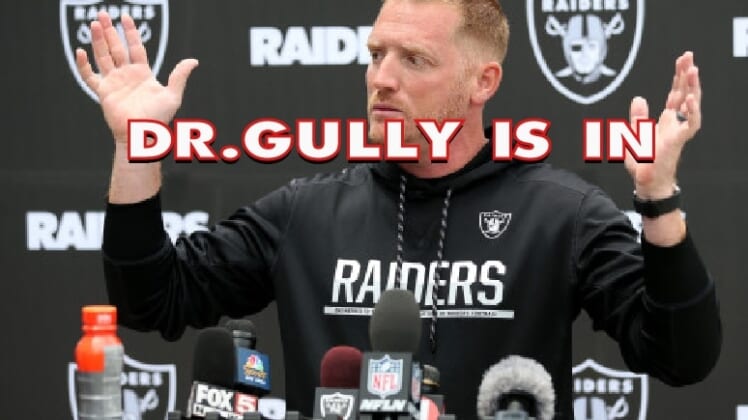 Yes, it’s beating the proverbial dead horse: the Raiders offense is sick and it needs a cure. The cure isn’t firing Jack Del Rio or Todd Downing. It requires everyone to get back to what makes the Raiders potent on offense.

The patient is sick and doesn’t show any signs of recovery. After a six-week flu, the Raiders are still on bed rest with a bug that is making Raider Nation lose their lunch. Yet it doesn’t take a doctor to cure what ails Oakland’s pillaging marauders. Instead it takes a bit of Dr. Emmett Brown’s Back to the Future Elixir.

What Made The Raiders Offense Work in 2016

The Raiders finished 12-4 in 2016 behind one of the National Football League’s top offensive units. Not only were the 2016 Raiders stout up front, but they could run the ball with power and spread the field with a deep passing game.

The Raiders offense in 2017 looks much different than 2016. (Photo by Scott Winters/Icon Sportswire via Getty Images)

Built as a quick-strike spread passing offense, Oakland moved up and down the field with impunity last season on the back of franchise quarterback Derek Carr. As Carr goes, so goes the Raiders offense. Before a season-ending injury in Week 16, Carr put up eye-popping numbers. Carr threw for just under 4,000 yards, 28 touchdowns and was intercepted only six times. His wideouts Amari Cooper (1,153) and Michael Crabtree (1,003) both cracked the 1,000-yard mark and power running back Latavius Murray (now with Minnesota) rushed for 788 yards and 12 touchdowns.

The combination of the power-running Murray, with wide open offensive sets, worked for the Raiders and former Offensive Coordinator Bill Musgrave. Mixing in pre-snap motion, and a multitude of different offensive sets, would give opposing defenses fits as they weren’t always prepared for what the Raiders threw out there. This strategy also created openings for the talented Raiders receivers who often found themselves with wide open looks down field. Carr was able to progress through multiple reads and often found one of them past 10 yards for big gains.

Consider this: All four of Oakland’s top receivers in 2016 (Cooper, Crabtree, Seth Roberts and tight end Clive Walford) averaged over 10 yards per catch. Even Murray, coming out of the backfield, averaged eight yards per grab. It was pretty simple: power running game+spread passing game=wins

The coach-bashing members of Raider Nation would say it all begins and ends with Downing. And while he certainly has some responsibility for the current malaise, there are several factors why this offense has sputtered.

First, Carr has not looked consistently comfortable in the pocket. In the pre-season, Carr was given a pass (and didn’t play much to begin with) in his recovery from his broken tibia from last season. When the Raiders jumped out to 2-0 to start the season, Carr still didn’t look himself. It’s true he put up great numbers at times, but his footwork still looks unsettled and was highlighted in the Washington game. Through eight weeks, Carr has thrown as many picks as he did in all of 2016. Caveat: the guy has played with multiple fractures in his back.

Second, the addition of Marshawn Lynch hasn’t added as much to the power running game as was expected. Perhaps the expectations were unrealistic, either way Lynch hasn’t had as many touches and hasn’t produced as expected. To be fair, Lynch hasn’t been used in ways Murray was in 2016 – especially in the passing game. At the same time, Lynch has dropped many of the passes that have come his way. With the importance of the inside running game to this spread offense, it has to get better.

Third, the offense seems constrained. When it has gone vertical successfully, like against Kansas City, it has been successful. Carr has the supporting cast – including the addition of tight end Jared Cook – to run the offense as he did in 2016. Yet it hasn’t happened. It’s clear the offensive sets are not as open as or creative as last year. There have been spurts of it followed by what seems a more conservative approach. NFL analysts all agree Del Rio and Downing would be best served opening up their schemes like 2016. That doesn’t mean Downing can’t or won’t, but for whatever reason they haven’t.

Talked to Kurt Warner about #Raiders offense: "Really basic. Not a lot of motion or bunch formations. Not many easy opportunities for Carr."

Great Scott! The Raiders need to go back to the future on offense.

Hello? McFly. It’s simple: go back to the future.

That doesn’t mean bringing back Musgrave. It means opening up the offensive playbook and doing what the team was built to do – spread the field and attack the defense. Committing to the inside running game – and succeeding – is vital. It opens up the bigger plays down field and allows Carr to check down and find the open man.

For whatever reason, it appears Carr’s reads this season have mostly been focused on one receiver. His ability to pass the ball in just over two seconds supports this point of view.

I do agree with what Kurt Warner said to Vic Tafur. The Raiders look a bit stiff and bringing more motion back to the pre-snap offense means more looks and a better chance and big plays vertically. Del Rio, Downing, and Carr need to get on the same page. A game against the putrid Miami Dolphins, followed by a bye and two weeks of preparation for the Patriots game in Mexico City, might just give them that opportunity. While it may be too late for Oakland to make the playoffs, fixing the offense – and fixing it fast – may give them a chance to make a run.