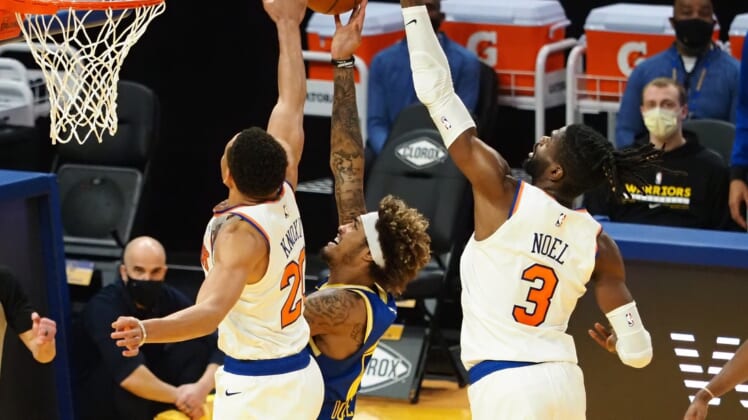 The New York Knicks hope to duplicate a Northern California sweep they accomplished last season when they visit the Sacramento Kings on Friday night.

The Knicks won only 21 games last year, but two of them came in a three-day stretch last December.

On that occasion, New York outlasted the Golden State Warriors in overtime at San Francisco, had a day off, then ventured the 90 miles to Sacramento for a 103-101 win behind Julius Randle’s 26 points and nine rebounds.

They get an opportunity to repeat thanks to a one-sided, 119-104 road win over the Warriors on Thursday night.

But this time around, there will be no day off before attempting to complete the double.

First-year Knicks coach Tom Thibodeau took time Thursday night to praise the leadership of Randle on an improving team that is riding a three-game winning streak.

“He’s always been a great worker, so that sets a great tone for how we’re going to go about our business,” the veteran coach said. “And now he’s more comfortable with the vocal aspect of it. In this league, oftentimes you have guys who say all the right things and do none of them. So the important thing is what you actually do each and every day.”

Randle and RJ Barrett have been the offensive leaders for the Knicks, with at least one of them going for 20 or more points on each night of New York’s win streak.

It was Barrett’s turn to lead the way against the Warriors. He had a career-best 28 points, igniting a Knicks offense that put up its second-highest point total of the season.

That was only half the story, however. New York put its improved defense on display at Golden State, limiting the potent Warriors to 9-for-38 shooting on 3-point attempts.

The Knicks have held eight opponents — including their past three — to 104 points or fewer and have gone 6-2 in those games.

Read More: Game recap: New York Knicks get off to fast start in victory over Warriors

In Sacramento, the Knicks will see a team that has held just two opponents under 115 points — and both those games were a while ago.

Since limiting Houston to 102 on Jan. 2, the Kings have seen pinball numbers put up on them on a regular basis, with the Toronto Raptors going for 144, three other teams totaling 132-plus and all but one foe hitting 122-plus.

Sacramento’s best defensive effort in its past nine games came Wednesday night on the road against the Los Angeles Clippers, who managed just 115 points. Still, it was enough for a 19-point win, the Kings’ fourth straight defeat.

“We see the mistakes and see what needs to be done,” Kings veteran Glenn Robinson III said after the game. “Now it’s on us to fix it.”

Something that doesn’t need fixing is De’Aaron Fox’s game. He put up 25 points on 10-of-18 shooting to go with seven assists against the Clippers, one game after scorching New Orleans for 43 points on 17-for-27 shooting with 13 assists.

The past six Knicks-Kings games in Sacramento have been decided by a total of 23 points. One went into overtime. Sacramento went 4-2 in those contests.