Game recap: New York Knicks get off to fast start in victory over Warriors 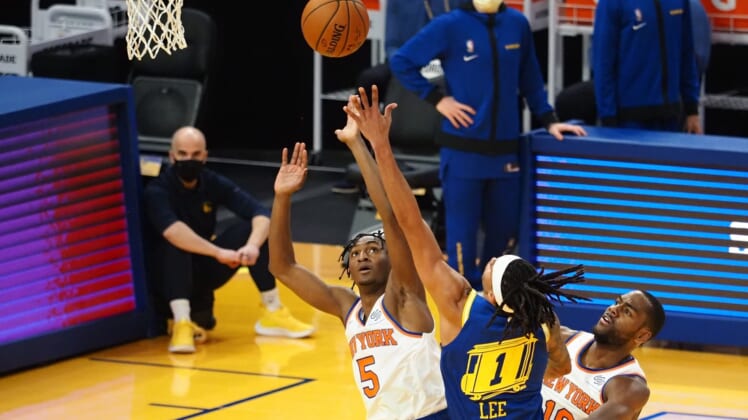 R.J. Barrett recorded a career-best with 28 points and the New York Knicks used a 40-point first quarter to build a lead they relinquished only momentarily in a 119-104 victory over the Golden State Warriors in San Francisco on Thursday night.

All five Knicks starters scored in double figures, including Mitchell Robinson with 18 points and Julius Randle with 16 points, as New York opened a four-game Western Conference swing with an impressive win.

Stephen Curry had a game-high 30 points, but shot just 5-of-14 on three-pointers, for the Warriors, who were coming off back-to-back wins over the Los Angeles Lakers and San Antonio over the previous three days.

Reggie Bullock hit four three-pointers for New York, including three in the first five minutes as the Knicks were opening the game on an 18-8 run.

Seeking a third straight win, the visitors went up by as many as 11 in the first period and were caught just once the rest of the night, that coming at 55-all after a pair of Curry free throws with 2:01 remaining in the half.

But Elfrid Payton contributed a three-pointer to an 8-2, half-closing run that re-established a six-point advantage, and the Warriors fought an unsuccessful uphill battle the rest of the night.

Barrett’s 28 points were one more than he scored on two occasions as a rookie last season. He shot 10-for-17 overall and 2-for-3 on 3-pointers.

Payton finished with 15 points, Bullock had 12 points, all on three-pointers, and Alec Burks chipped in with 11 for New York, which logged its second-largest point total of the season. The Knicks exploded for 130 points in a 20-point win over Milwaukee last month.

Randle was the game’s top rebounder with 17, missing a triple-double by one assist. Nerlens Noel added 11 rebounds to complement six points and four blocks off the bench.

Andrew Wiggins had 17 points to go with a team-high nine rebounds, while James Wiseman totaled 15 points and Eric Paschall had 12 for the Warriors, who lost Draymond Green to a two-technical ejection in the second quarter.

Green’s ejection occurred during a foul-marred first half in which 48 free throws were shot. New York led 63-57 at the break, the result of having made 21 of 27 free throws, while the Warriors were 15-for-21.