A little over a month ago, the Miami Dolphins’ record sat at 1-7 and the team’s odds to make the playoffs were an abysmal 1%, per FiveThirtyEight.

Even that seemed generous at the time.

However, a five-game winning streak has propelled this team back into the playoff picture with just four games to go. FiveThirtyEight now pegs Miami’s playoff chances at 10%. That’s only slightly worse than flipping a coin three times and landing on heads with all three flips.

It is by no means going to be an easy road, but a playoff berth seems (shockingly) within grasp.

So what’s it going to take for it to become a reality?

Miami’s chance to make the playoffs shoots up to 76% if it can manage a W each of the next four weeks. Just to clarify: That would mean Miami finishes 10-7 on the season and finishes the year on a nine-game winning streak.

The Miami Dolphins’ next four games:

Extending the win streak is not out of the question. The Houston Texans started off 0-3 in 2018 and went on to win nine straight to insert itself back into the hunt (where they went on to lose in the Wild Card Round).

Miami would still need some helpful losses from other Wild Card hopeful teams like the Los Angeles Chargers, Indianapolis Colts or Cincinnati Bengals, even if they do win out. Hell, falling divisional rival Buffalo Bills could be the team that ultimately gets left out of the party so the Dolphins can secure a spot. 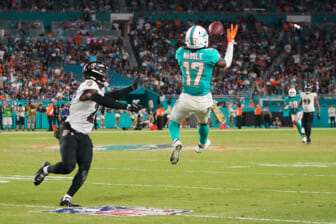 A more realistic scenario: Just don’t lose to the Patriots

Any loss drastically reduces the Miami Dolphins’ chances at the playoffs, per FiveThirtyEight.

However, no loss reduces it quite as much as a Week 18 “L” to the Patriots. Both teams have come a long way since Miami eked out a win in Foxborough in Week 1. Although, strange things have happened in Miami against the Patriots – I’m looking at you, Miami Miracle – so Dolphins fans will be hoping for some more Miami magic once again.

The team’s game against New England is where it has the most to lose, but even if the Dolphins lost to just the Jets, Saints or Titans and won its other three games, the team’s odds to make the playoffs would be in the single digits.

How does Miami stack up against the competition?

The Week 1-through-Week 9 Miami Dolphins probably don’t have much of a chance against the current iterations of the Saints, Titans or Patriots.

However, this seemingly reborn Dolphins team over the last five games may have a puncher’s chance to compete with all four remaining teams.

Miami ranked 29th in the league in Defense-adjusted Value Over Average (DVOA), which is a calculation of efficiency based on situation, from weeks one through nine, according to Football Outsiders. Even the Jets ranked better in that time period.

However, Miami’s DVOA ranks 18th from Week 10 on. That’s better than the Jets, Saints and Titans. It’s not by much – New York ranks 19th and New Orleans ranks 20th – but it’s still enough of a difference to warrant some optimism.

The team is still left with division rival New England. Per Football Outsiders, the Patriots have the best DVOA in the league during this same period and the best overall weighted DVOA throughout the entire season. That means not only will New England be its most important challenge, it will likely be Miami’s toughest challenger, too.

There is one other beacon of hope: Since Miami’s matchup against New England comes in Week 18, there is the possibility the Patriots’ playoff seed is already set at that point. That would mean the team’s starters would be resting and potentially open the door for an easier win for Miami.

That didn’t stop the Dolphins from getting blown out last year against the Buffalo Bills’ backups in Week 17 with a playoff spot on the line, but it’d still be a nice break for the team.