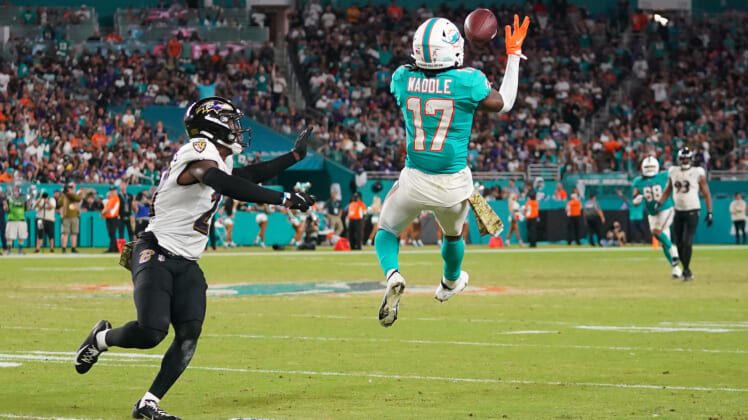 The Miami Dolphins season has not gone the way the organization hoped, but it’s not all bleak for this franchise with plenty of games left ahead.

Through the few ups and prolonged downs, Miami’s first four selections in the 2021 NFL Draft have been the bright spots. The Dolphins have also been among the teams to utilize its rookies the most, ranking fourth in offensive and defensive snaps played by first-year players.

Jaylen Waddle emerging as No. 1 receiver

When Miami had traded down from three to 12, then back up to six, it was evident the franchise was set on nabbing a top pass-catching prospect.

There was plenty of debate regarding which of the playmakers the Dolphins would land, but it became increasingly evident as the draft rolled on with Kyle Pitts and Ja’Marr Chase coming off the board. Ultimately, Miami re-united starting quarterback Tua Tagovailoa with his favorite deep threat in college.

While that reunion hasn’t looked too similar so far this season, Waddle has still thrived in this offense.

Waddle has a disappointing average targeted air yards (6.9), which measures how far downfield a receiver is when the quarterback passes to him, per Next Gen Stats. That’s in the same range of gadget players like Lavisha Shenault, short-yardage slot receivers like Jarvis Landry and tight ends like T.J. Hockenson. He is in the bottom 25 among 112 qualifying receivers with at least 28 targets this season. Not exactly what you want to see from your “deep” threat.

Even so, Waddle has made out well in his role primarily as a slot receiver thus far. His 3.4 average yards of separation leads all qualifying Dolphins receivers, per Next Gen Stats.

He’s also been the team’s most efficient chain mover. Nate Tice of the Athletic Football Show found that Waddle has converted 41.7% of his targets into a first down, which leads the team (min. 5 targets per game). That rate is 32nd best in the entire NFL.

This hasn’t been the version of Waddle most expected, but it’s still a welcome sight for Dolphins fans to see some immediate production from the sixth overall pick.

Holland wasn’t the consensus No. 1 safety coming into the draft, so it was a bit of a surprise when Miami took him ahead of Trevon Moehrig near the top of Round 2.

Both players have shined, but it’s clear that Holland is a perfect fit for head coach Brian Flores’ defensive scheme. So far, he’s been what Flores seemingly wanted former Dolphin Minkah Fitzpatrick to be before he asked to be traded in 2019.

What do I mean by that? Well, here are Holland’s alignment snaps so far this season, per Pro Football Focus (PFF):

That versatility has produced results thus far, too. Through 11 weeks, Holland has the most pressures (14) among all safeties across the league, per PFF. He’s also held up in coverage with three pass breakups throughout the season and one interception. Moehrig is the only other rookie safety that boasts those same coverage stats.

He’s also proven to be a solid run defender. He has just one missed tackle defending the run through this entire season, and he has a higher run stop percentage (1.3%) than Moehrig, per PFF.

Phillips had a slow start to his rookie season.

He played 118 snaps through four weeks, which was ninth among rookie defensive linemen, despite being the first drafted. He was primarily being brought in for obvious passing situations, allowing him to pin his ears back and rush the passer. Phillips had a high success rate in these situations, generating a 19% pressure rate, according to PFF. And those weren’t just empty pressures either, as he posted the highest pass-rush win rate among rookies during that time period.

His usage since then has skyrocketed.

From Week 5-10, he leads all rookie linemen in total snaps. However, his play has suffered since, even on true pass sets. His pressure rate dropped to 6% during this time frame on obvious passing downs. But Phillips is a solid pass rusher, ranking sixth among rookies in pressures (22) and third in sacks (four).

To call this rookie offensive tackle’s first year thus far a success may be a stretch, but he’s held up fairly well for someone thrust into a starting position in Week 1.

I applaud him for that, as he’s logged more offensive snaps than any other rookie tackle in the league, despite being the fifth one taken in the draft. A mixture of injuries and flat-out bad line play has forced Eichenberg into the starting role at left tackle, where he’s faced staunch pass-rushing units including the Tampa Bay Buccaneers and the Buffalo Bills twice.

He has not, however, held up too well under these circumstances.

Miami’s rookie lineman has allowed the most pressures (45) for all first-year NFL linemen thus far, as does his nine sacks and 29 quarterback hurries allowed. Not exactly what you’d call a stellar resume thus far.

Eichenberg is also struggling with penalties, being called for the fifth-most (eight) among rookie linemen this season.

Still, in a draft where Miami came away with a lot of solid early contributors, while Eichenberg has stumbled, it’s good that he’s getting a steady stream of game reps during his first year. Offensive line is one of the few positions in football where playing time actually does translate to development and improvement most of the time, so perhaps this trial by fire is just what Eichenberg needs to develop into a solid blocker in year two and three.