The Jacksonville Jaguars are in good hands with Blake Bortles

After settling uncomfortably into the NFL’s basement the past few years, the Jacksonville Jaguars are finally poised to break out of the slump in head coach Gus Bradley’s third campaign.

There is a sudden air of competence surrounding the franchise that has recently become a league laughingstock.

At the center of this turnaround is quarterback Blake Bortles.

The second-year quarterback, rumored to be making huge positive strides during camp, came out with purpose and put on a show Friday night against the Pittsburgh Steelers. It was the kind of performance you’d expect from Tom Brady—crisp, aggressive and completely in control.

Bortles also ran in a touchdown from four yards out, showcasing his underrated athleticism with an impressive reach for the pylon to finish off the play.

TOUCHDOWN ON FOURTH DOWN! BLAKE BORTLES RUNS IT IN FROM 4 YARDS OUT! #Jaguars – 9, #Steelers – 8 pic.twitter.com/yvC2e5dUxb

Look, nobody is going to mistake this performance for that of a regular-season showing. We all understand that showing well during the preseason means positively zilch. However, when you consider Bortles was legitimately atrocious during his rookie season, the performance was downright inspiring for Jags fans.

It also was a sign of things to come.

Bortles spent his offseason working with throwing coach Tom House, who focused on improving the young quarterback’s mechanics. But that was only a small aspect of a bigger plan, which Bortles hopes will carry him into the upper echelon of NFL quarterbacks for years to come.

“This offseason was big for me to go out and develop a system on how to do certain things,” Bortles said when he reported to camp (ESPN). “[Things like] how to take care of your body, how to continue to watch film, how to learn and do all of that.” 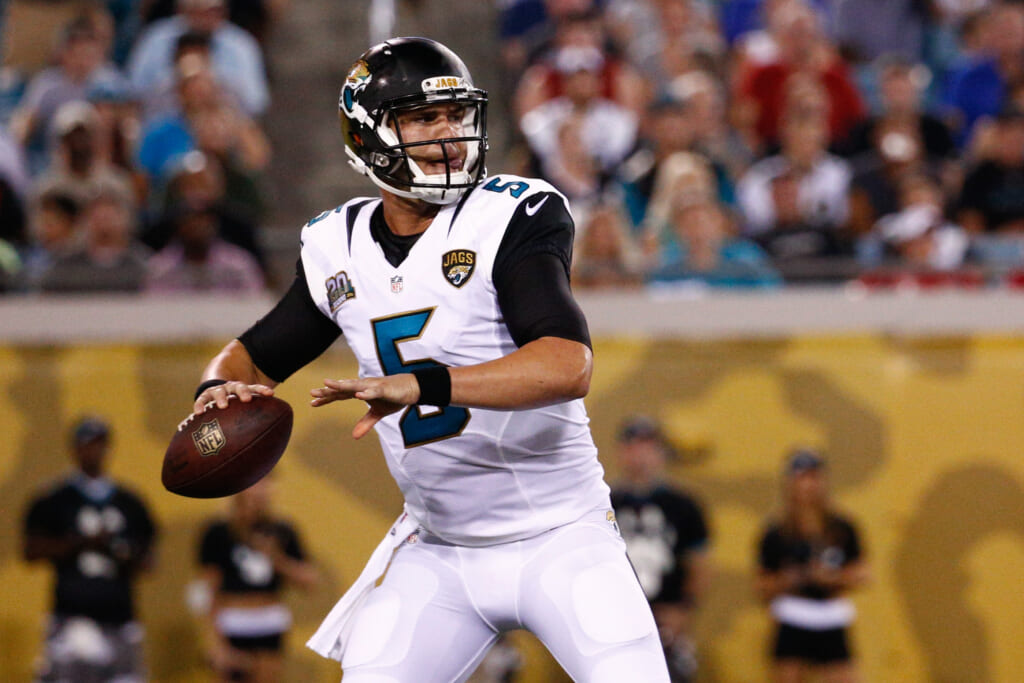 All his hard work has been paying dividends. General manager David Caldwell, along with everyone else in charge in Jacksonville, has been impressed by the significant improvements they’ve seen from Bortles this summer.

“From where he’s at now compared to where he came in last year as a rookie, I think it’s night and day,” Caldwell said in the first week of camp (ESPN).

“From the day he stepped on the practice field last year to the first day of training camp this year his ease of throwing motion, the tightness of his ball, the compactness of his motion, the quicker release, the footwork, the balance — all those things I think are better,” Caldwell said. “And just his overall presence. He’s comfortable now.”

His comfort level was apparent for all to see Friday night.

Again, this was only a preseason performance, but it’s crystal clear Bortles has set himself, and his team, up for success. It certainly helps his cause that the Jaguars have assembled a talented corps of playmakers to catch passes from last year’s first-round pick, too. Marqise Lee, Allen Robinson, Allen Hurns and tight end Julius Thomas can all make big-boy plays against top competition.

Come back for MORE this Friday: http://t.co/6ql5CzvOmyhttps://t.co/X9CzBoIdJT

Things are certainly looking up for the Jaguars, with Bortles as the centerpiece of their upcoming success.

Coming into the league as a rookie out of UCF, most draft experts unanimously declared him to have all the tools to become an elite passer in the NFL. Thanks to his hard work, it appears Bortles will live up to his potential, unlike so many other talented passers who thought they could rely on talent alone.

And he’s going to drag Jacksonville out of the slums in the process.