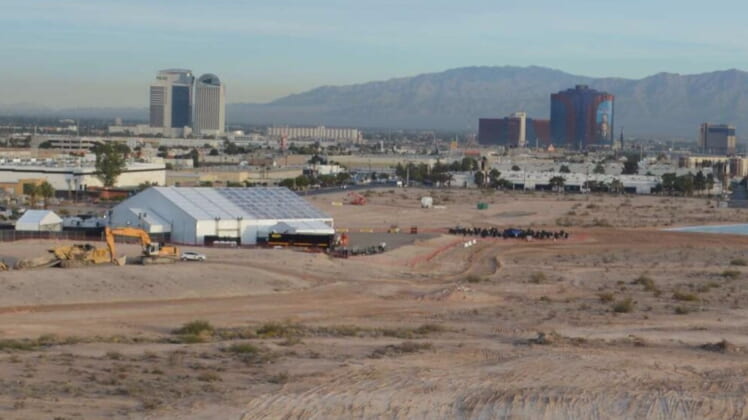 In yet another important step in the Oakland Raiders inevitable relocation to Las Vegas, the team will hold a private stadium groundbreaking on the site today at 5pm.

For anyone doubting the finality of the Raiders relocating to Southern Nevada, today should put any of those doubts to rest.

The site of today’s groundbreaking as of 7:30am PT.

The team, elected officials, media and other special guests will gather on the site off Russell Road and Interstate 15 to at 5 p.m. to officially kick off construction of the $1.92 Billion, 65,000-seat Las Vegas Stadium just off the famed Las Vegas Strip.

Just a few days after the Las Vegas Stadium Authority unanimously approved the pre-construction plan, shovels will be in the ground both ceremonially and literally. The site was prepared by the Laborer’s Local 872 over the weekend complete with a mock-up of the Raiders playing field and how it will sit in the new stadium. The Local 872 also held its own tailgate with many of the men and women who will spend the next three years building the state-of-the-art facility.

The Raiders have already installed a 24-hour “stadium cam” so fans can see the site and hopefully follow the progress of the stadium during its construction. The entire ceremony will also be streamed live on Raiders.com.

Minneapolis-based Mortenson Construction and Henderson’s McCarthy Building Cos. are the general contractors on the project. Mortenson most recently completed the Minnesota Vikings new stadium – US Bank Stadium in downtown Minneapolis.

SnapChat users at the event can use the LVRR Commemorative SnapChat geofilter.

The Raiders and the LVSA look to move ahead quickly on construction to complete the project in time for the 2020 season. It looks like smooth sailing despite a small blip caused by some local organizations who are still not happy with the team’s community benefits plan. That issue looks to be resolved very quickly and before the LVSA’s next meeting in December.

Want to know more about the economic impact the stadium will have on the Raiders and Las Vegas? Listen to hosts Scott Gulbransen and Scott Winter on the latest Las Vegas Raiders Report Podcast as they break it down. They also talk to Tommy White, Business Manager of the Laborer’s Local 872. Take a listen and subscribe.