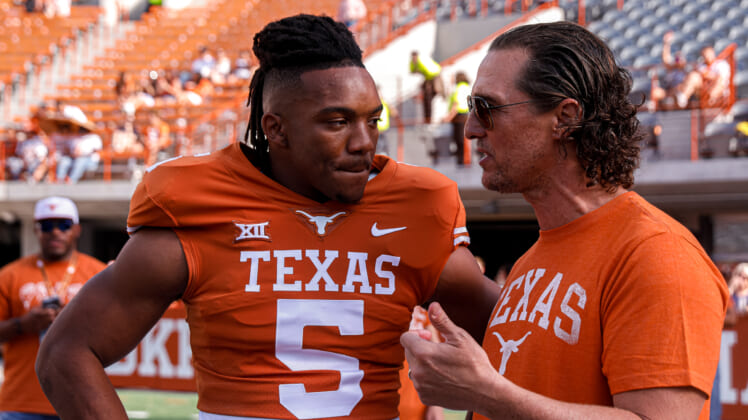 Now that college athletes are finally allowed to cash in on their popularity and potential via NIL contracts, players are taking advantage in all sorts of ways across the nation. One notable NCAA football star who’s enjoying the rule change is Texas Longhorns junior running back Bijan Robinson, who’s just signed his sixth NIL deal.

His latest, is much more high-profile than the others and likely his favorite agreement yet.

Revealed on his social media platforms, Robinson has signed with an Austin, Texas Lamborghini car dealership.

There is no word on what the exact agreement with Lamborghini Austin entails, but chances are he’ll be able to lease, or at least drive one of the various luxury sports car models around town on his various adventures, possibly even to and from practice.

Now when Robinson’s not flashing his wheels on the field, he can ride in style away from the gridiron as well. Quite quickly too.

Robinson is coming off a phenomenal breakout season, but it unfortunately ended after ten games due to him dislocating his elbow. Now that he’s 100% healthy again, Robinson should be ready to roll to begin the year.

For many young individuals who grow up dreaming of someday driving or even owning an impressive car such as the Italian-made Lamborghini, Robinson gets to experience that lifestyle a bit sooner than he maybe would once he reaches the NFL, thanks to his recent partnership.

Aside from landing the luxurious Lamborghini contract, the 20-year-old Robinson also has signed NIL deals with Raising Cane’s, C4 Energy, Centre, DAZN, and Cameo according to Sports Illustrated.

While Robinson signing with a Lamborghini dealership is notable, I have a feeling it’s only the start of extravagant NIL deals we’re sure to hear of from college athletes. Let’s see who can top it.