Texas Rangers use homers to rally past Angels 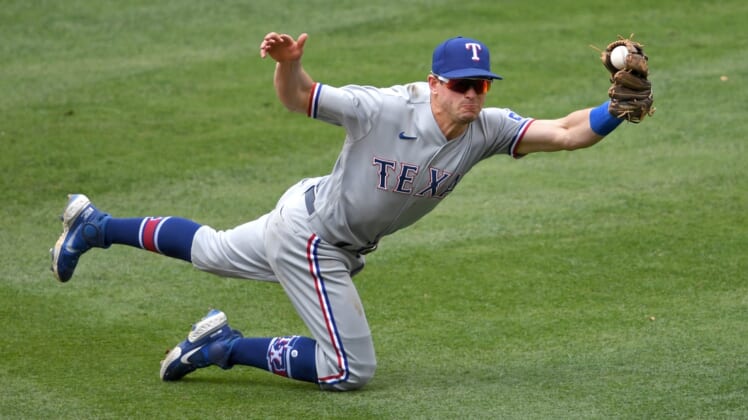 Adolis Garcia and Nate Lowe hit back-to-back home runs in the eighth inning for the Texas Rangers, turning a 3-1 deficit into a 5-3 lead and eventual 7-4 victory over the Los Angeles Angels Wednesday afternoon in Anaheim, Calif.

Angels reliever Mike Mayers, who had allowed just one run in eight games this season, entered the game with one on and one out in the eighth. After he walked Joey Gallo, Garcia launched a three-run home run on a 1-2 pitch from Mayers, a four-seam fastball that he left over the middle of the plate. It was Garcia’s third home run of the season.

Lowe followed with a solo homer, his fifth of the season, and the Rangers added two more runs in the ninth.

Rangers reliever John King (2-0) pitched a scoreless seventh inning to get the win over Mayers (1-1).

The first three homers came against Rangers starter Mike Foltynewicz, who gave up nothing else in six innings. He struck out six and did not walk a batter.

The three runs were enough at the time for Angels starter Jose Quintana, who had his best start of the season. He gave up one run on two hits and four walks in five innings. He struck out eight and left with a 3-1 lead.

Angels reliever Chris Rodriguez pitched scoreless innings in the sixth and seventh, but when he walked Nick Solak with one out in the eighth, he was pulled in favor of Mayers.

Upton left the game in the eighth inning with apparent cramping in a calf.