Texas Rangers look to rebound from rough opener vs. Royals 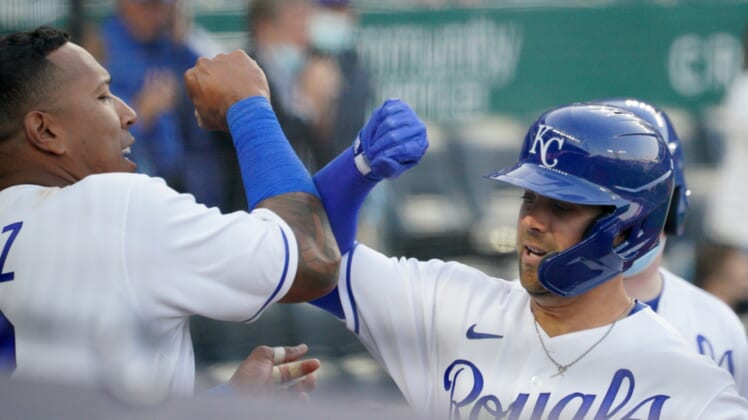 There’s a well-worn expression in baseball: “It’s a marathon, not a sprint.”

That’s not a reference to the Texas Rangers and Kansas City playing a 4-hour, 26-minute game on Opening Day, the longest nine-inning game in the history of the Royals. It speaks to the relatively small value of one of 162 games.

As the two clubs get ready for the second game of the season on Saturday afternoon, the Rangers will be trying to prove that they aren’t a team that squanders a 5-0 lead after a half-inning and an 8-5 advantage in the middle of the third, like they did in Thursday’s 14-10 loss.

The Royals will be trying to prove that the resiliency they showed in coming back from those deficits so quickly really is who they are, a never-give-up club that treats a horrendous start by their ace as “no big deal.”

“It was amazing to see,” said Brad Keller, the aforementioned Royals ace. “I fell in a hole early, down five runs after the first inning. But they came out swinging. Five runs right back on the board, and it was a new ballgame going back out for the second.”

“On the pitching side it was really weird,” he said. “They had two weak ground balls for hits and then three walks. Those are things we’ve been preaching heavily not to do, and it led to them getting back in the game. At that point it was a free-for-all.”

Woodward will turn to new arrival Kohei Arihara in a bid to calm down the Royals’ bats. Arihara, 28, has spent the last six seasons with the Nippon-Ham Fighters in Japan, and he will make his major league debut. He had a career 3.74 ERA in Japan with an arsenal of seven pitches.

Woodward expects him to pick up where he left off after a solid spring training.

“I expect to see what we saw in his last start,” Woodward said. “He was good in spring training. The natural build-up in spring, he got better and better as he went. The last start he showed what he is capable of. Especially in those first three innings he was nasty.

“I think the biggest thing with Kohei is maintaining that through a long season. Not having as many days’ rest (between starts) is probably what I’ll keep my eye on the most. But I’m excited. He’s got good stuff. He’s a competitor. He commands the baseball. There’s a lot of really good things to look forward to.”

The Royals will welcome back an old friend. Mike Minor was 6-6 with a 2.55 ERA with Kansas City in 2017. He spent the last three seasons with the Rangers and the Oakland Athletics.

In four career appearances against the Rangers – including one start – Minor is 0-2 with a 6.30 ERA.

“There’s a lot of young guys with a lot of potential,” Minor told MLB Network about his role with the Royals. “I feel like I need to lead the way by example. Show these guys what to do between starts.

“A lot of these guys have more talent than I do, so it’s more about getting those guys ready to compete every day.”