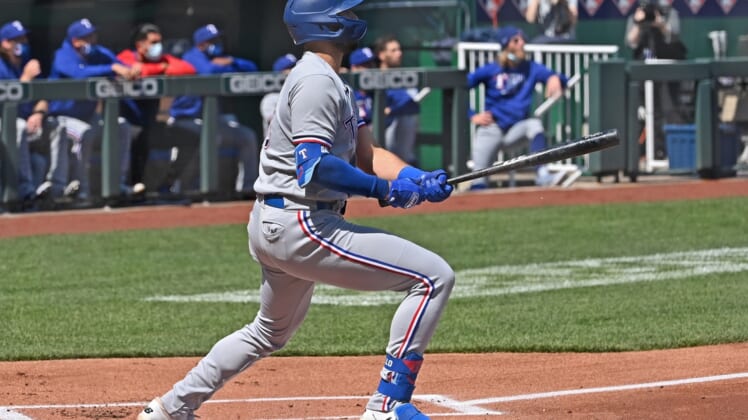 The Texas Rangers and Kansas City Royals conclude their three-game series Sunday with one of each getting the starting nod. The Rangers will try to salvage the final game of the series after losing 11-4 Saturday. The Rangers have given up 25 runs in the first two games.

The Rangers will send Jordan Lyles to the mound Sunday as he tries to prove his 1-6 season in 2020 was not the pitcher he can be. He finished 2019 with a 7-1 record in his final 11 starts with Milwaukee, prompting the Rangers to sign him as a free agent following the season.

But Lyles struggled throughout 2020, with a 1.56 WHIP. Manager Chris Woodward has decided to use him in a “tandem” role, piggybacking him with another pitcher to use up the innings normally assigned to the starter.

Lyles wasn’t happy with the role, at least early in spring training.

Woodward plans to pair a right-handed starter with a left-handed backup when he goes the tandem route, so Lyles’ replacement probably will be Dane Dunning or Taylor Hearn, who pitched in relief on Opening Day. Woodward knows it won’t be easy to use the tandem system for long.

“It’s gonna be a tough challenge to do the tandem the whole year,” he said, adding that he hopes to be able to extend their innings as the season goes on.

“Especially Jordan, who’s got no limit. He’s thrown a ton of innings in the past, and he can build up to whatever,” Woodward said.

For the Royals, Brady Singer will try to prove that the high expectations that come from a first-round selection in the 2018 draft and his debut two seasons later was the right choice.

Singer had a solid 2020, finishing with a 4-5 record and a 4.06 ERA. But he finished strong, winning three of his last four, including allowing just one hit in eight innings in Cleveland. He then backed it up with a strong spring, going 2-0 with a 2.65 ERA in four starts.

In his last spring start, against Cleveland, he allowed just two hits — only one out of the infield — in five innings, striking out five against just one walk.

“I feel really good,” he said following that outing. “I feel strong. The buildup was great throughout the starts, so I feel great. I felt like it was exactly what I needed.”

Royals manager Mike Matheny said, “That’s just the kind of tune-up we were hoping for with him. He did everything we were hoping he would do, commanded the fastball, slider looked good, just one really good last one for him.”