As far as NFL Week 4 goes, the quarterback play had an outhouse or castle feel to it. Matt Ryan topped 500 yards. Ben Roethlisberger threw for five touchdown passes. Those men live in the castle — at least during Week 4.

Which quarterbacks produced the worst performances of NFL Week 4? 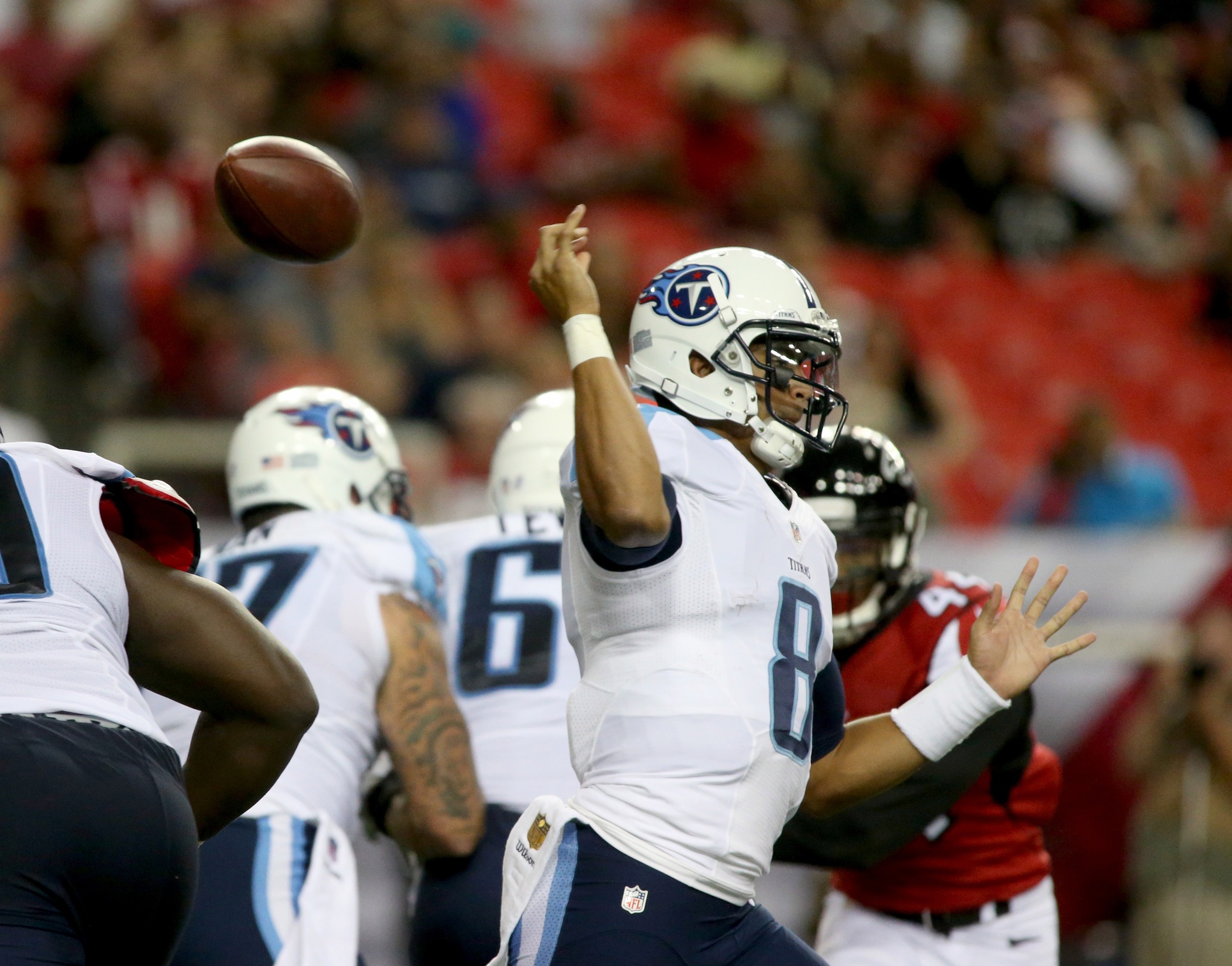 When our mothers used to drop the “if you can’t say anything nice, don’t say anything” line, they probably weren’t thinking about performances like Mariota’s. The nicest thing we can say about the quarterback’s game in Week 4 is that he only threw one interception.

Mariota completed a paltry 13-of-29 passes for only 202 yards with no touchdowns.

As a matter of fact, Mariota’s 2016 struggles go beyond Week 4. He’s been uneven throughout the season, but Mariota’s last two weeks have been nothing short of dreadful.

Marcus Mariota didn't start the season great, and he's regressed since then. pic.twitter.com/BLQQ5rQNCG

Good quarterbacks are certainly allowed to have bad games. But when the good ones have a clunker, they usually come back with a big outing in the next game. Mariota backed up a bad outing in Week 3 with one that might have been worse in Week 4.

A Week 5 tilt against the Dolphins should bring better results. But the way Mariota is going, we can’t be too sure.

The second pick of the 2015 NFL Draft struggled in Week 3. The man taken right before him wasn’t any better.

The Buccaneers were never competitive at home against the Denver Broncos. Winston’s effort certainly didn’t help their cause. The second year signal caller went 17-for-35 for 179 yards, no touchdowns, and two interceptions.

Certainly the Broncos’ defense has made plenty of quarterbacks look bad. But a franchise quarterback should step up in a home game against a good defense. Even if it comes in a convincing defeat, quarterbacks like Winston should provide a few moments that remind the team and its fans why a No. 1 pick was used on him.

That didn’t happen on Sunday.

Winston’s efforts were completely underwhelming in a game that provided virtually no positives for the home fans. 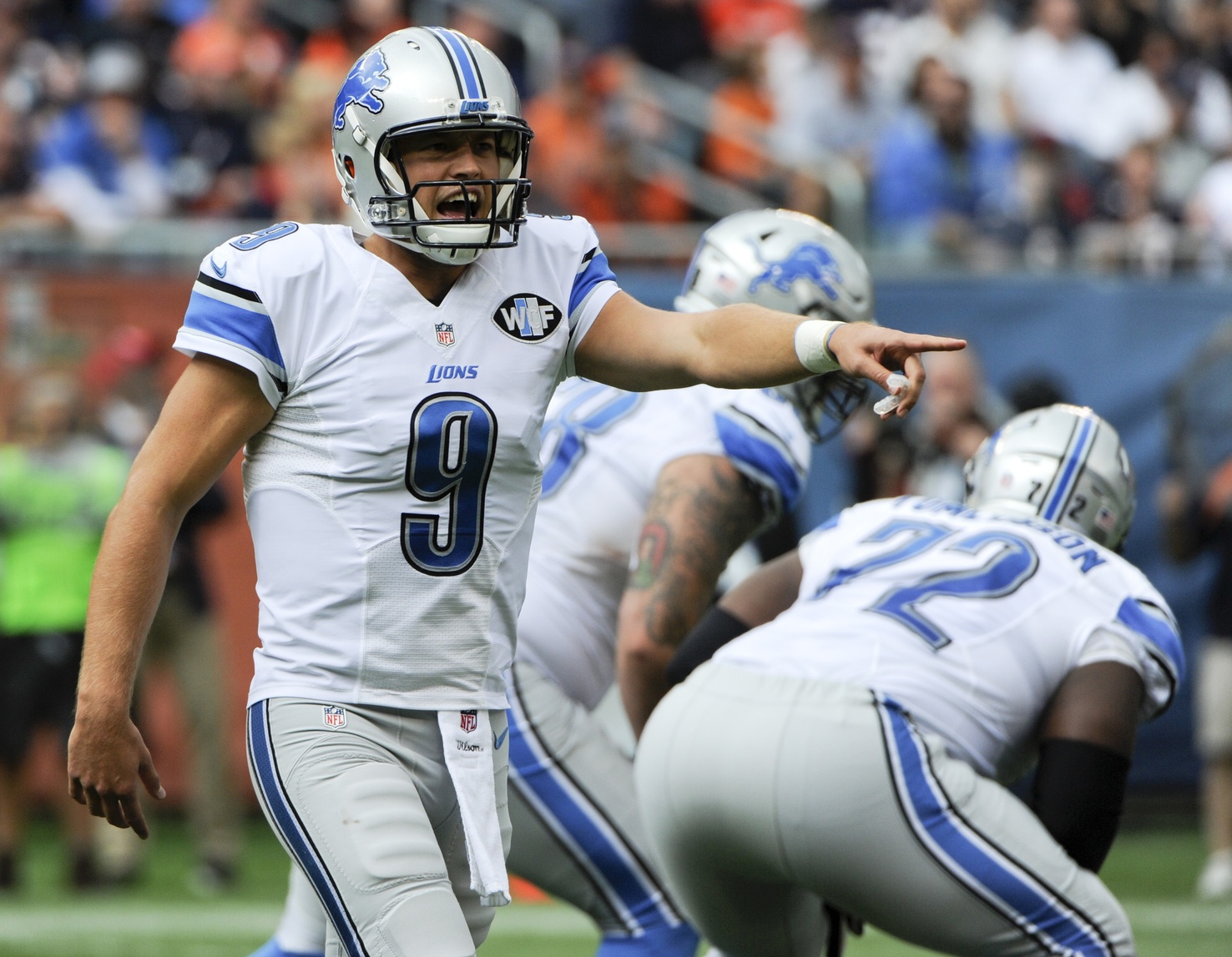 The best quarterback in this game belonged to the Chicago Bears. While Brian Hoyer had a solid 28-for-36, 302 yard, two touchdown, zero interception effort, Stafford was quite underwhelming.

Detroit’s quarterback was 23-for-36 for 213 yards, no touchdowns, and two picks.

Making matters worse, both interceptions came deep in Chicago territory. The Lions only lost this game by three points. At the very least, those interceptions kept Detroit from trying two field goals that could have changed how the rest of the game went. They could have even changed the result.

Even on the road, Stafford didn’t need to do much to beat the Bears today. Unfortunately for the Lions, he fell well short of what he needed. As such, they sit at 1-3.

By Gabbert’s standards, his stats weren’t awful. But for the standards of even an average NFL quarterback, Gabbert’s numbers were rough.

He was 16-for-23 for 196 yards, a touchdown, and an interception. On top of that, Gabbert was at his worst at the wrong time.

Down four points in the fourth quarter, Gabbert had a wide open Torrey Smith for a potential touchdown. Instead of throwing the ball in a place where only his receiver could catch the ball, the only man with a chance to pull it down was Morris Claiborne.

Those are passes an NFL quarterback needs to make.

As the weeks go by, it’s getting increasingly obvious that Gabbert is not the answer in San Francisco. That doesn’t mean that Colin Kaepernick is, but it’s time to shake things up. The false positive that was the 28-0 Week 1 win over the Los Angeles Rams is now far in the rear view mirror. 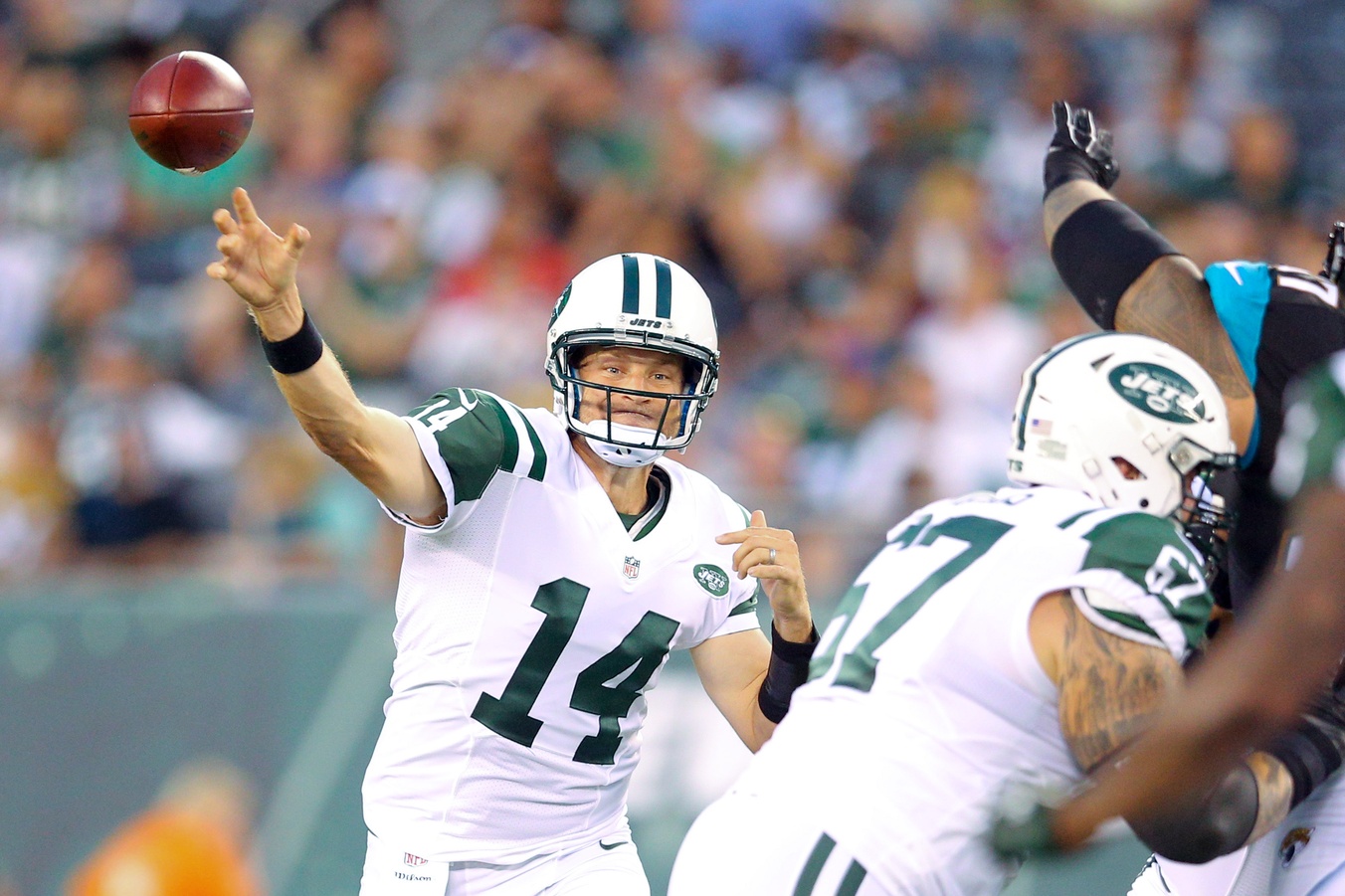 The good news for Fitzpatrick is that he cut his Week 3 interception total in half. The bad news? Three interceptions is still plenty lousy.

The Jets are 1-3, and quite frankly Fitzpatrick is a big reason why. It’s awfully difficult to overcome a quarterback throwing four touchdowns against 10 interceptions.

But as horrendous as those numbers are, they don’t even tell the full story.  New York has entered the fourth quarter with a chance to win in all three of its losses. Even if he’s had a tough game before hand, that’s when a quarterback needs to step up.

Fitzpatrick has clearly not done that.

Ryan Fitzpatrick has 0 TD passes and 11 INT in 4th quarter over last 5 games. He has NFL-worst 16 4th-quarter INT since start of last season

As things stand right now, the Jets are right on the brink. A playoff spot can be achieved from 1-3, but it’ll certainly be a challenge. For that challenge to be met, Fitzpatrick will not only need to be better. He’ll need to pull a full 180.

After a loss to Seattle, that doesn’t seem likely.

Palmer wasn’t having a great game before leaving with a concussion. He had a decent 288 yards passing with a touchdown but was only 23-for-36 and threw an interception. Palmer’s injury gave way to Drew Stanton.

Arizona’s backup was worse. Much, much worse.

Stanton was 4-for-11 for only 37 yards, no touchdowns, and two interceptions.

In total, the efforts of the two quarterbacks led to only a 13 point output from Arizona. The Cardinals’ defense played well enough to win, but the offense didn’t hold up its end of the bargain against the Los Angeles Rams.

Because of that, Arizona is now 1-3 and heading into a must-win Thursday night game against the 49ers. Even against a mediocre San Francisco team, the Cards can not like their chances if Palmer can’t play.

With any more quarterback efforts like this, a preseason Super Bowl favorite will find itself in a lot of trouble. 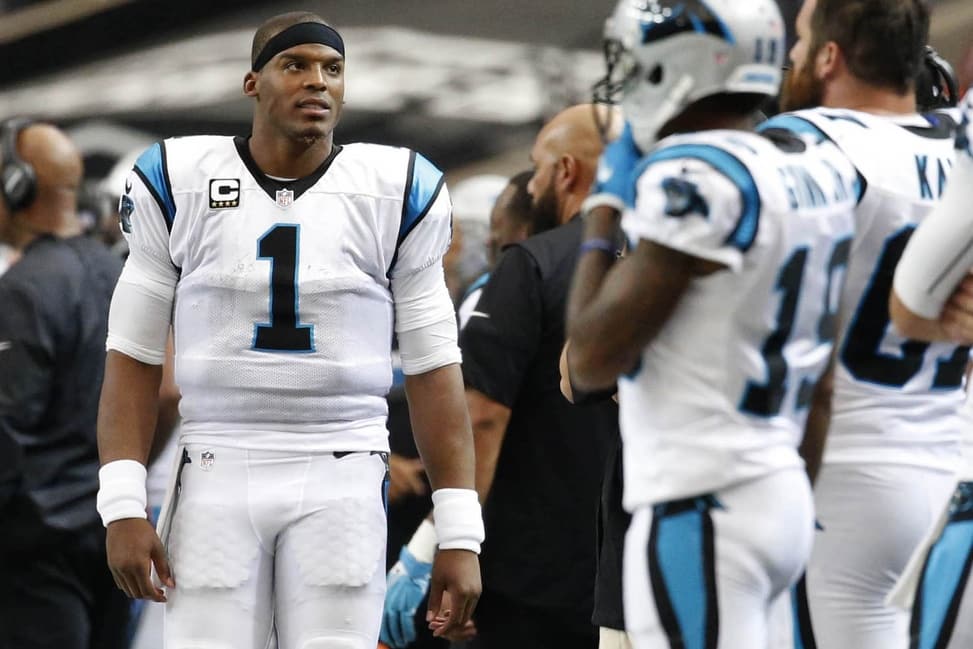 Of course, no conversation about Super Bowl favorites in trouble would be complete if it didn’t include the Panthers.

Things were supposed to be better this week. With all due respect to the Atlanta Falcons, they don’t have a defense that rivals the Broncos or Minnesota Vikings. Behind the reigning MVP, the defending NFC champs were supposed to get things right this week.

That did not happen.

Newton’s final stats look pretty average, but he didn’t generate much of a threat while on the field. The reigning MVP was 14-for-25 for 165 yards and a touchdown before being pulled with a concussion.

Anderson came in and had decent numbers while making the game interesting, but threw two interceptions himself.

To be fair, Carolina’s offensive line deserves a lot of blame for this. But whichever quarterback is in the game has to to better when it’s time to throw the ball. If that can’t happen, the Panthers’ season is going to be incredibly disappointing when it’s all over. The season also may be over well before Week 17.

The Sunday Night Football game against the Pittsburgh Steelers didn’t offer many positives. An early Smith interception set the Steelers up for a 15-0 lead, and effectively that was all she wrote.

The only way to overcome a sizable deficit is to feature a strong vertical passing game. Smith and Kansas City did anything but that.

Smith eventually worked himself into some decent garbage time stats, but he couldn’t do anything when it might have influenced the game.

The Pittsburgh offense supplied a constant onslaught through the first half, opening up a 29-0 lead. Smith not only failed to answer Ben Roethlisberger and company, but he really failed to stay on the field long enough to give the defense any time to rest and adjust.

The Chiefs sit at 2-2, so things aren’t quite as desperate in Kansas City as they are in New York, Carolina or Arizona. But while Week 4 was rock bottom, this offense and quarterback have been unimpressive through the first quarter of the season.

A Week 3 win against the Cleveland Browns gave Miami and Tannehill a reprieve. But Week 4 against the Cincinnati Bengals was yet another rough week for the beleaguered Miami quarterback.

"The Miami Dolphins need to move on from the Ryan Tannehill era." – @AnezSez

Tannehill’s Thursday Night Football game was an equivalent of a boxer coming out early and winning the first round of his fight. Sure, a good start is nice but if you can’t land the knockout, it doesn’t amount to much.

The Dolphins and their quarterback didn’t land a knockout punch and didn’t follow it up with anything. After the 74-yard touchdown to Kenny Stills early in the first quarter, Tannehill’s performance went downhill. The Bengals answered, scoring 13 unanswered points in the first half, taking a 16-7 lead into the locker room. They cruised to a 29-7 win.

The Dolphins quarterback finished the game 15-for-25 with 189 yards, one touchdown, and one interception. He’s not getting the job done against good, or even average defenses. If those numbers don’t get turned around, Miami will have to make a big change at the position or it’s simply not paying attention. 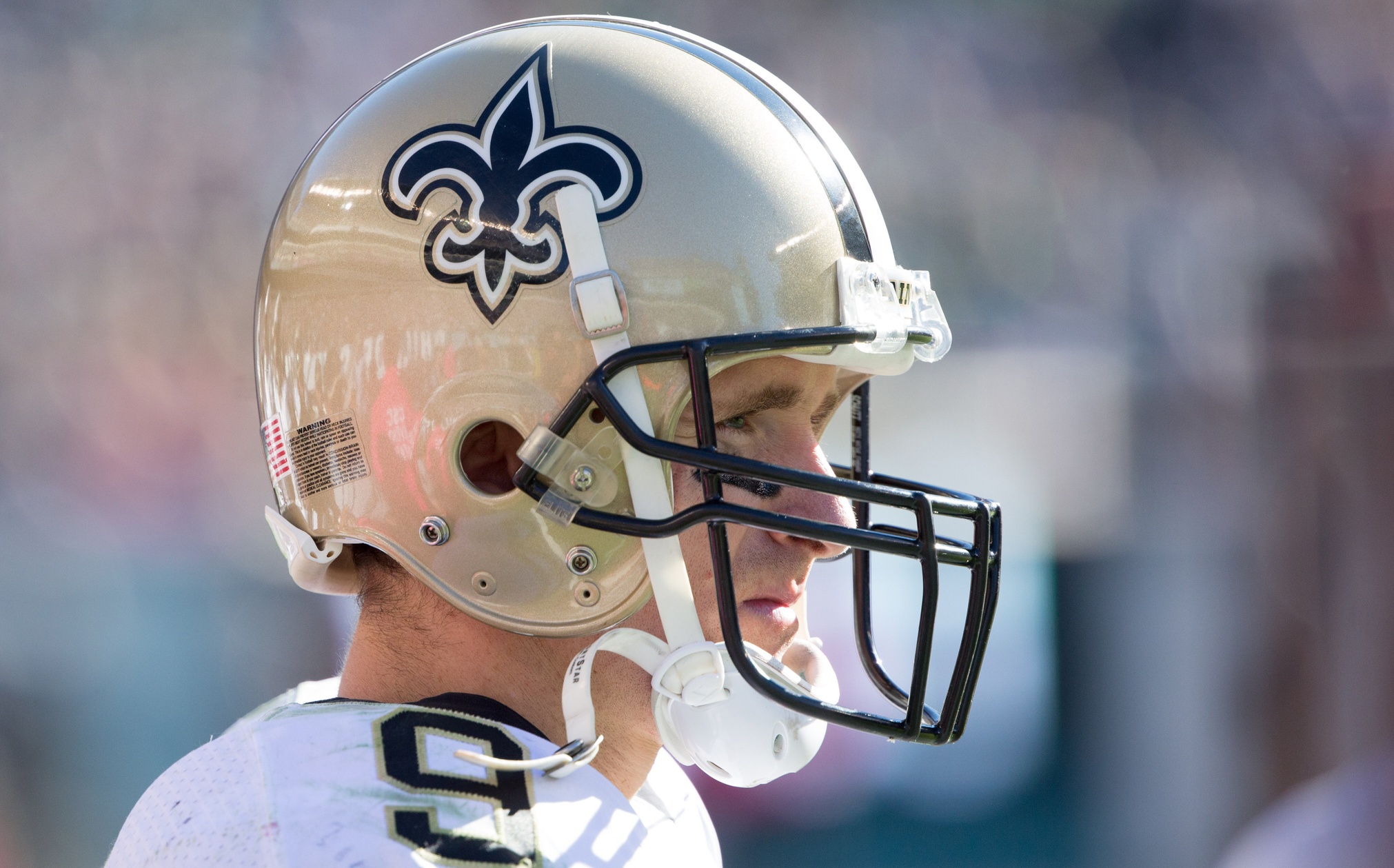 Brees was 23-for-36 with 207 yards passing, two touchdowns, and two interceptions. In reality, the Saints won this game because Mike McCoy never met a second half lead that he couldn’t blow.

If the San Diego Chargers played even an average second half of football, Brees’ return to San Diego would have brought a loss and New Orleans would have headed back home with an 0-4 record.

The two interceptions that Brees threw were costly, but it could have been worse. Both occurred deep in New Orleans territory and set up a short field for the Chargers. Fortunately for the Saints, the two picks led to only six points.

Brees has had a tremendous season that’s gone largely wasted by the rest of his roster’s ineptitude. Sunday was the opposite. Brees had a rough outing and was bailed out by his team.