With NFL Week 5 upon us, a quarter of the 2016 season is in the books. Still, some good performances have managed to fly under the radar.

As we head into Week 5, which unheralded players are in the best position to make a big impact?

Even with four teams on a bye, there’s no shortage of lesser known players who have favorable matchups heading into the weekend of NFL action.

So, who are those guys? Which 10 unheralded players are set to shine in NFL Week 5?

While Coates has played well, we can’t look at how juicy this matchup is for him without first talking about his opponent.

What exactly has gone wrong with the New York Jets this year? Sure, plenty of focus has been on Ryan Fitzpatrick, and rightfully so. But the New York secondary is in absolute shambles.

This secondary now gets a date with Ben Roethlisberger and Antonio Brown.

It will take a full effort from the Jets’ defensive backs to be sure that Brown’s Week 5 performance doesn’t rival what Julio Jones did against a much better Carolina Panthers defense in Week 4. That will open the field up for the rest of to Pittsburgh’s other receivers. That is where Coates enters the mix.

Coates is coming in strong. The second-year receiver has at least 50 yards receiving in all four games this season. In a blowout Week 4 win over the Kansas City Chiefs, he caught six balls for 79 yards.

New York is going to have to pick its poison this week. As good as Coates has been, he doesn’t have Brown’s track record.

Unfortunately for the Jets, Coates will still be plenty poisonous on the secondary.

If you’re a fan of the Jets, you can take some relief in the fact that the they have a pretty darn favorable matchup as well.

The Steelers’ secondary isn’t exactly a strength of the team. Pittsburgh has allowed no fewer than 287 yards passing in any of its four games this season.

Enunwa has been a pleasant surprise for the Jets this year. He leads the team with 23 receptions and his 243 receiving yards trail only Brandon Marshall for the team lead in that category.

Fitzpatrick has had a consistently solid possession target in Enunwa all season. Even while the quarterback has struggled, Enunwa has caught at least four passes every game. Expect for that to continue against the Pittsburgh defense.

Those short routes will be important in one of two ways.

None of this is to say that we should expect Fitzpatrick to outduel Big Ben. But in large part due to Enunwa’s presence, the Jets should have plenty of offense at Heinz Field this week.

Something about the San Diego Chargers seems to bring out the big play ability in Walford.

Granted, as a rookie in 2015, he caught only three passes in two games against San Diego. Interestingly enough, they went for over 21 yards per reception.

In 2016, the Chargers have struggled against tight ends. Opposing tight ends have caught 26 balls for 301 yards against the Bolts in four games this season. That works out to an average of better than six receptions and 75 yards per game. It’s also nearly 12 yards per reception.

In a nutshell, Walford is prone to making the big plays. San Diego’s defense has a tendency to allow them against tight ends. Put the two together and we’ve got a fine matchup.

Oakland’s starting tight end, Lee Smith, is out. With that, Walford’s playing time will only go up. Naturally, the more he’s on the field, the more likely Walford is to make a big play.

Quarterback Derek Carr loves to push the envelope. He will surely find a way to take advantage of that matchup.

A career journeyman, Alexander seems to have found a home with the Bills. Through his first four games with his new team, Alexander has gotten to know opposing quarterbacks quite well.

.@buffalobills Lorenzo Alexander (@onemangang97) is the 1st player in #Bills history to participate in a sack in the team's first four games

The Buffalo’ pass rush has been no joke through the first quarter of the season. Alexander and fellow linebacker Jerry Hughes have each recorded four sacks. Hughes has had the far more prolific career, so opponents are more likely to give him attention, opening the other side up for Alexander.

The Los Angeles Rams have found a way to a 3-1 record, but the offensive line is still a question mark. Los Angeles will have to stack one side of the line. At this point, Hughes is still more likely to see the double teams.

With that, the smart money definitely says that Alexander will be in on a sack for a fifth straight week. More importantly, he’ll consistently be pressuring Case Keenum.

Even if he’s consistently under pressure, Keenum will certainly have plays where he gets to release the ball. While Keenum has thrown to Tavon Austin more, no Rams receiver has caught more balls for more yards than Britt.

So, what kind of defense will Britt be facing?

We can fall in love with their effort against the New England Patriots, but the Bills’ secondary has been brutal. Prior to holding New England receivers to one reception for 16 yards, Buffalo’s best output against opposing receivers was a 12-reception, 172-yard day against the Baltimore Ravens in Week 1. The Jets wide outs followed up with a 21-catch, 364-yard outing in Week 2, while the Arizona Cardinals perimeter guys caught 20 passes for 244 yards in Week 3.

Week 5 is a favorable matchup for Britt. He figures to catch a lot of passes, and at 6-foot-3, is a good red-zone target. 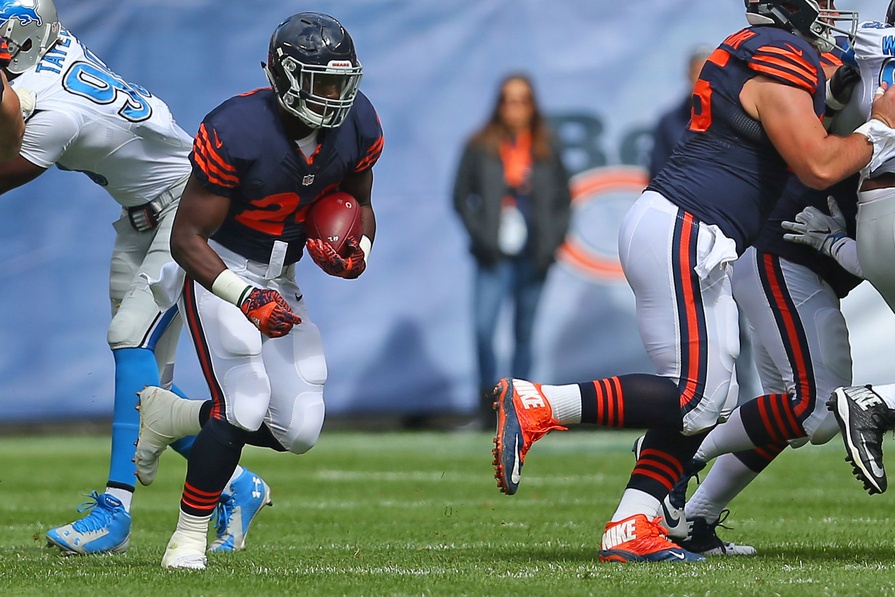 Howard made his presence felt in the first start of his NFL career. In Week 4 against the Detroit Lions, the rookie from Indiana carried the ball 23 times for 111 yards. Howard also added three receptions for 21 yards.

We also have to figure that with Brian Hoyer under center, the Bears will try to use a run-heavy offense. Still, the Indianapolis Colts will have to respect the passing game. Hoyer has passed the ball reasonably well this year. In his two starts, Hoyer has thrown for 619 yards, four touchdowns, zero interceptions and has a 105 passer rating.

If the Colts can’t stack the box, their run defense is quite vulnerable.

Over the first four weeks, Indianapolis has surrendered 423 rushing yards at 4.2 per carry. Both totals are good enough for 18th in the league. As mediocre as those totals are, they’re even a bit enhanced by one game.

In Week 3, the Chargers ran for 35 yards on 16 carries. In its other three games, the Colts have up 336 yards on 73 carries for an average of 4.6 yards per attempt. Only three teams are worse than that.

While the one game against San Diego was nice, we have to call the other three outings the norm. On top of all of that, the Colts are serving as “guinea pigs” for the NFL and not getting a bye week after playing in London.

It all contributes to what should be another good game against this defense.

In Week 4, Bouye effectively took Tennessee tight end Delanie Walker out of the game, allowing only two catches. His efforts contributed towards Houston’s win in a big way.

But for anyone paying attention, it was hard to be surprised by the Week 4 game. While matched up primarily against Bouye, opposing tight ends have averaged only three catches for 23 yards against Houston this year.

He gets a big assignment in Week 5. Tight end Kyle Rudolph’s 19 receptions for 221 yards are both second on the Minnesota Vikings, trailing only Stefon Diggs. His three touchdown receptions lead the team.

The Vikings are a nightmare opponent right now. Handing Minnesota its first loss will not be easy. But if Bouye can find a way to shut Rudolph down as he’s done to other tight ends, the Texans will achieve a very necessary step towards an upset.

Patterson has a lot of speed and athleticism. With that, it wouldn’t be surprising to see him break a big play or two as a receiver.

But in reality, his impact is going to come more on special teams.

The Vikings tend to be in low-scoring games, which are often decided by field position. In those games, a kick return man who’s averaged better than 30 yards per return throughout his career is an asset.

But Patterson’s speed has not only come in handy as a return man on special teams. He’s also been a valuable gunner for Minnesota.

Even if his speed isn’t forcing turnovers, Patterson getting down the field quickly will likely cause the return man to call for a fair catch. To beat a defense like the Vikings, good field position is necessary. If they’re not turning the ball over, it’s hard to get good field position without the hidden special teams yards.

While it may not show up on the stat sheet, Patterson has made a huge impact for his team this year. The Week 5 game against the Texans will likely be another low-scoring affair. Look for Patterson’s impact to be felt again.

Moses is different than most of the other players listed. They all have matchups against struggling opposition. The Baltimore Ravens still have plenty of big names on the pass rush. Moses figures to see a lot of players like Terrell Suggs and Elvis Dumervil.

Moses makes this list because his recent run suggests that he’ll be ready for the assignment. In fact, according to Pro Football Focus, no right tackle was better in Week 4.

“All of the top RT performances this week benefited to some degree from the competition they were going against,” Sam Monson of Pro Football Focus said. “But Washington’s Morgan Moses kept a clean sheet from a pass-protection standpoint, allowing no pressure or penalties on his 62 snaps.”

Kirk Cousins will need time to operate if the Redskins are going to move their winning streak to three. As good as Baltimore’s guys are, Moses has been playing better. He should give his quarterback the time needed to make the big passes.

We’re making an assumption that this game will be played. The most recent word is that the NFL is planning on playing this game, but other options are being discussed.

McCourty couldn’t be entering this week any hotter. Regardless of who he was matched up against, McCourty was a beast against Houston.

Per @PFF, #Titans CB Jason McCourty limited Texans to a 2.8 passer rating on passes into his coverage.

This week, McCourty will be lined up against a quarterback who is decidedly not hot, Ryan Tannehill. Throughout the 2016 season, the Miami Dolphins’ quarterback has struggled to find even the mediocre form that he had in 2016.

That’s music to the ears of a defensive back. McCourty is primed for a big day.

Granted, it may be the kind of day where Tannehill decides to stay away and we don’t hear McCourty’s name much. But if Tannehill does go at McCourty, expect the Tennessee defensive back to be up for the task.