Week 1 of the NFL season was rarely boring. As expected, plenty of stars shone brightly throughout the league’s opening weekend. Also as expected, an abundance of unheralded players stepped up and made their presence felt.

Those guys are the subject of our attention today.

Now that we’ve seen all of 32 teams in action, which unheralded NFL players are in the best position to step up with a big performance in Week 2?

With a veteran like Tom Brady under center, this wouldn’t be such a strong bet. But inexperienced quarterbacks tend to lean heavily on receivers that they have a proven strong connection with.

In Jimmy Garoppolo’s first start, he clearly has a strong connection with Hogan.

As Hogan was against the Arizona Cardinals, the Miami Dolphins’ secondary is still far more likely to put its attention on more-proven commodities like Julian Edelman, Danny Amendola, Martellus Bennett and Rob Gronkowski.

Hogan had a huge day against Arizona’s secondary, which is one of the NFL’s best. Against Miami, expect even more passes thrown his way.

Despite all of their problems and question on defense, the Buffalo Bills managed to sack Joe Flacco four times in Week 1. The Baltimore Ravens sit at 1-0, but protecting the quarterback is a problem.

Meanwhile, Nassib was one of Cleveland’s few bright spots in its Week 1 loss to the Philadelphia Eagles. He spent a lot of time in the Eagles’ backfield, providing consistent pressure on Carson Wentz.

At this point, it’s tough to predict a win, or even a competitive game, from the Browns on Sunday. But that doesn’t mean that they won’t make Flacco’s life difficult.

Cleveland seems to have found something with its 6-foot-7, 275-pound rookie defensive end. Against an offensive line that’s had its issues on the young season, we should expect Nassib to be a bright spot again in Week 2.

A team with very real Super Bowl aspirations, Seattle will not get anywhere near Houston if it can’t protect Russell Wilson better. Against the Dolphins, the Seahawks’ offensive front looked disoriented. Against a Los Angeles Rams team with some talented linemen (though it didn’t show much Monday), Seattle will have to take extra steps to keep Wilson on his feet.

Enter into the equation Willson, who will be important for a few reasons.

One, he’s shown himself capable of holding his own in pass protection. So, if he needs to stay home and help out against the likes of Robert Quinn or Aaron Donald, Willson is capable of stepping up.

Two, short routes is a proven way to combat a heavy pass rush. Those kinds of routes are perfect for tight ends.

All of his contributions may not show up on a stat sheet, but we should expect Willson to be an important part of Seattle’s offensive attack. 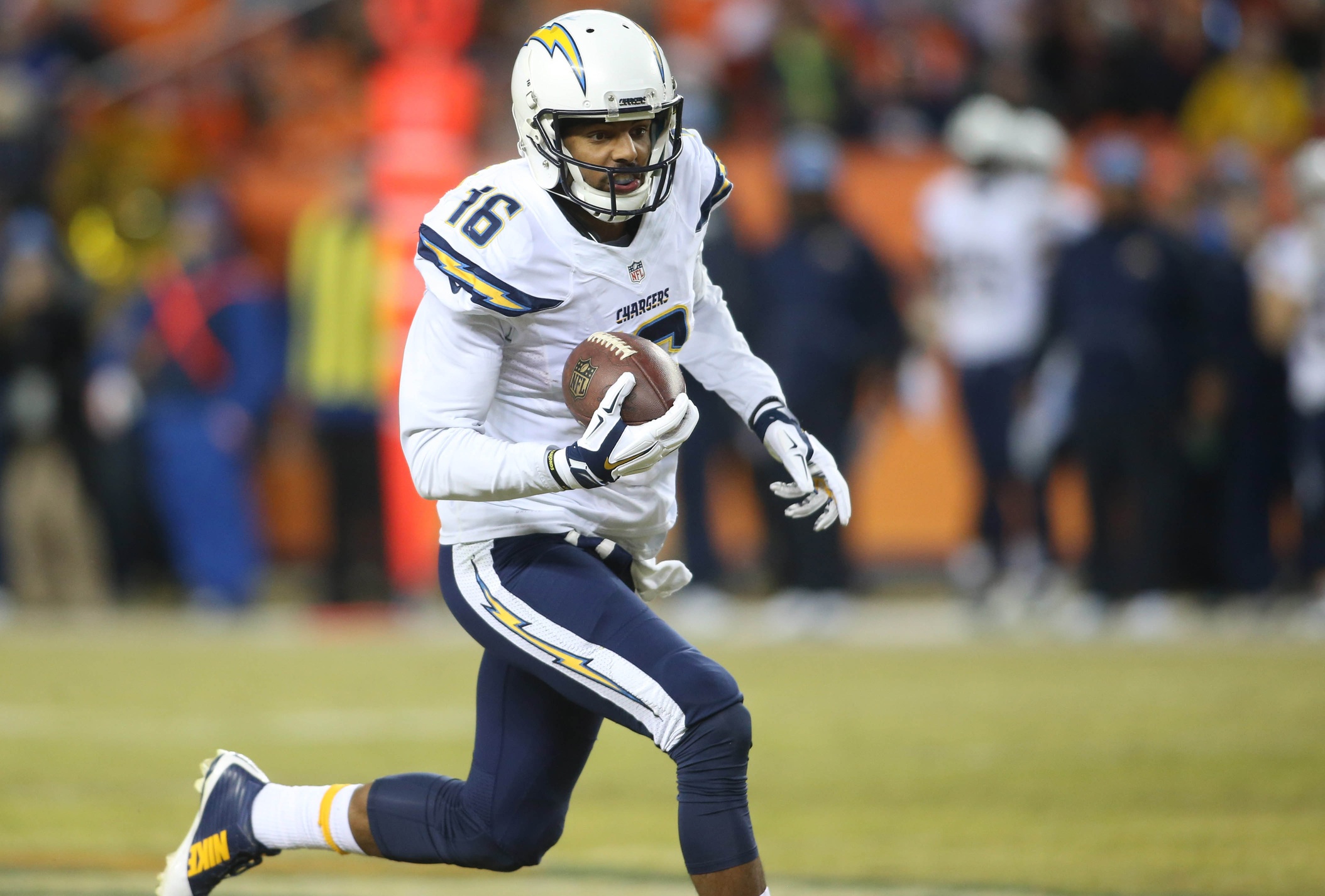 If San Diego had a young quarterback with Keenan Allen out, this spot would go to Dontrelle Inman. Young signal callers (and their offensive coordinators) tend to rely on shorter, more dependable route runners. That’s exactly what Inman is.

But Philip Rivers is not a young quarterback. If the Chargers’ receivers consisted of some out of shape, middle aged guys tossing the ball around while tailgating before the game, he’d still come out slinging.

With Rivers chucking the ball around, it stands to reason that the receivers posing the strongest threat in the vertical passing game would be in the best position to succeed.

Sunday isn’t the only part of that sample size either. Williams caught only two passes in 2015, but those went for 90 yards. This means that his four NFL receptions have gone for an average of better than 40 yards per play.

Williams likely wont catch handful of passes. But it’s safe to assume that he’ll make a few big plays, and more importantly, stretch the field for the rest of San Diego’s skill-position group.

Even against a team with an average pass rush, the Indianapolis Colts’ offensive line is generally overmatched. With the injury to Jack Mewhort, things are not getting any better with the men who are expected to protect Andrew Luck.

The Broncos do not have an average pass rush. In Von Miller and Demarcus Ware, Denver has outside linebackers that give even top-tier offensive lines trouble.

What in the world do the Colts do? In truth, Miller and Ware will likely be in Luck’s face throughout the day. But if Indianapolis is going to have a chance, it will need to at least limit the effectiveness of the Broncos’ brilliant edge rush. That means double teams on Miller and Ware. That will provide Crick with plenty of favorable matchups to pressure Luck from the inside.

Whether it amounts to sacks, stuffs or just a lot of disruption, expect to hear Crick’s name a lot on Sunday.

In reality, this spot could go to Dallas’ entire receiver corps other than Dez Bryant, who is decidedly not unheralded.

Ben Roethlisberger and Antonio Brown torched the Washington Redskins’ secondary on Monday. But Big Ben wasn’t so bad when going to Pittsburgh’s other receivers either. When not targeting Brown, Roethlisberger completed 19-of-26 passes for 174 yards and a touchdown.

The entire secondary — including Josh Norman — was a disorganized mess.

We can probably assume that Norman and Bryant will see a lot of each other Sunday. But even if Norman completely takes Bryant out of the game (don’t bet on it), the rest of Washington’s secondary has to deal with Dallas’ other receivers.

That will work to Beasley’s benefit. He was a thorn in the side of the New York Giants on Sunday, catching eight passes. Against another secondary still getting used to playing with each other, expect a repeat performance. Don’t be surprised if a few receptions are broken for big gains as well.

The Kansas City Chiefs surrendered four sacks on Sunday against San Diego. Going against Whitney Mercilus, Vince Wilfork, and of course, J.J. Watt this week, one would have to assume that the Chiefs’ coaches have spent many an hour figuring out how they might keep Alex Smith upright.

The answer, quite frankly, will be a lot of help. Even the best offensive linemen in the league struggle in one-on-one assignments against Watt.

That’s going to leave favorable matchups for Covington. He’s going to find himself being blocked in one-on-one assignments by members of an offensive line that showed itself to be pretty mediocre in Week 1.

Covington will have a glorious opportunity this week. He should be a constant disruptive force for Smith and the rest of the Kansas City backfield.

Much like Nassib, we shouldn’t mistake this for predicting a San Francisco win against the Carolina Panthers. But in Robinson’s NFL debut on Monday night, he looked like a real force in the 49ers’ defensive backfield.

Robinson played primarily in the slot on Monday. Assuming that holds, we should expect him to see a lot of Ted Ginn Jr., and may Greg Olsen in slot situations.

While Devin Funchess and Kelvin Benjamin figure to be the big play threats this year, getting matched up on Ginn and Olsen is an important assignment. After all, those two were Carolina’s top two receiving threats a season ago.

But if Monday night was any indicator, Robinson will be up for the task.

PFF: "In 23 coverage snaps, Rashard Robinson [@SHAD_JUSTDOIT2] allowed a grand total of 0 yards into his coverage" … 👀

Robinson had some off-field issues in college that hurt his draft value, but he’s a top-tier talent. If he’s on the field and focusing on football, expect him to have an even greater role in the 49ers’ defense. He was clearly doing that in Week 1.

It may not show up in the win column Sunday on the road against a tough (and certainly motivated) Carolina team, but Robinson is in line to have another big game.

While the rookie was taken in the seventh round, he is not a seventh-round talent. Much like Robinson before, some off-field issues knocked Mills down in the draft.

He showed that in Week 1. Mills was targeted only three times. One of those passes was caught for just three yards.

With an injury to Leodis McKelvin, Mills figures to see even more playing time on Monday Night Football against the Chicago Bears.

In all likelihood, Nolan Carroll will see most of the action on Alshon Jeffery, leaving Mills on Kevin White. White had a fairly modest three-catch, 34-yard performance Week 1 against the Texans.

With Mills adjusting quick to the NFL game and the Chicago offense struggling, expect another quiet day from White in Week 2.

According to Pro Football Focus, Newhouse was the best Giant on the field during the team’s Week 1 win over the Cowboys.

Now, we could be cynical and point out how uneven the Dallas defense line is. While that might be true, New York’s Week 2 opponent — the New Orleans Saints — might be worse.

Kasim Edebali was a virtual non factor in New Orleans’ Week 1 loss to the Oakland Raiders. Going against Newhouse in Week 2, it’s hard to imagine Edebali being any better.