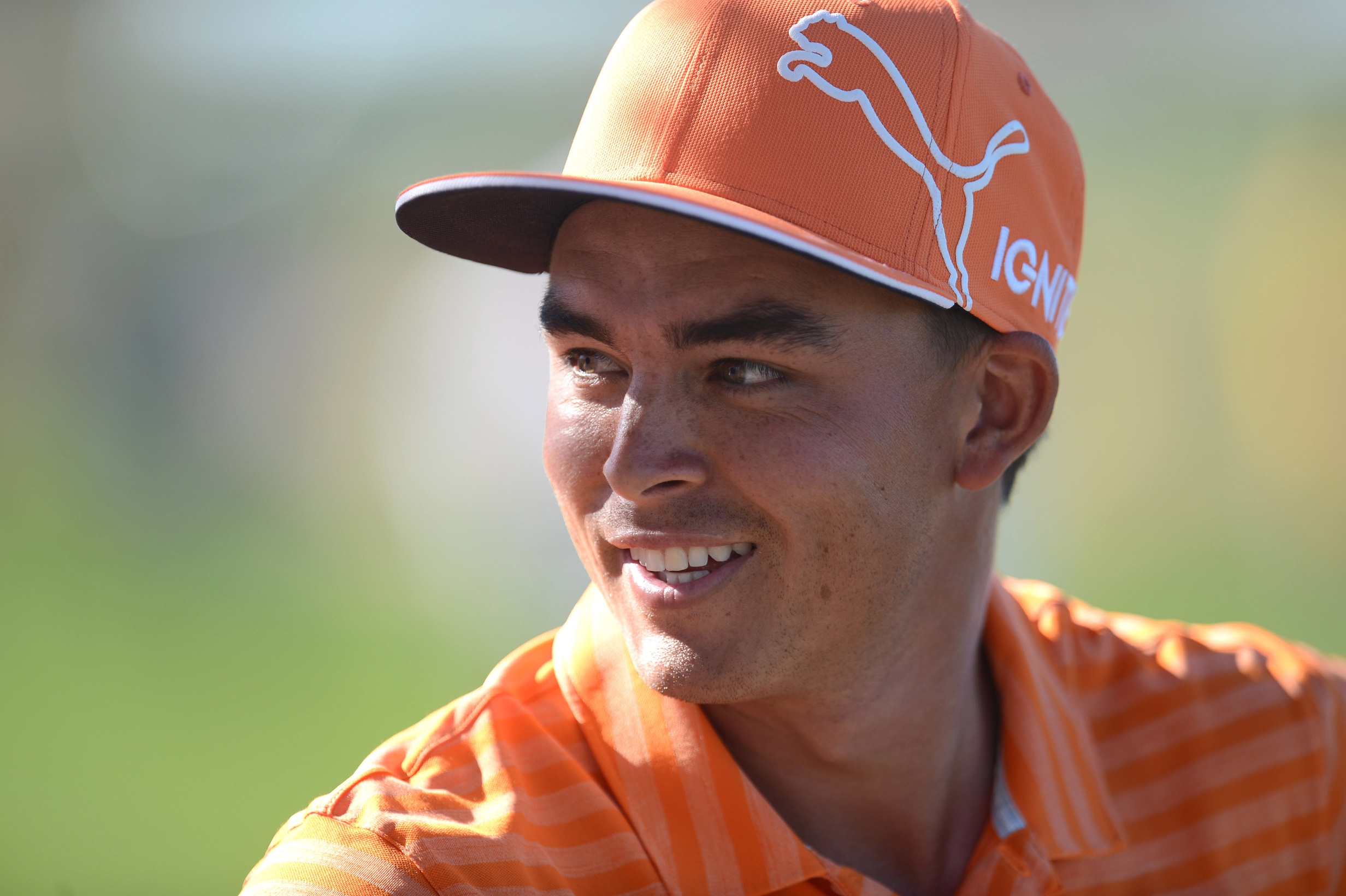 Round 1 of the 2017 U.S. Open is now in the books, and there were quite a few big surprises at Erin Hill Thursday to kick the major championship off.

Some of the top players in the world finished near the bottom of the standings, which is all the stranger considering the low scores that were posted by many in the field. Among them are last year’s champion, Dustin Johnson.

On the other end of the spectrum, a guy we’ve been waiting to see win his first major for what seems like forever was red hot. Rickie Fowler’s opening-round 65 gave him a spot in the U.S. Open record books.

We’ll cover both of these stories and more as we look at the most notable surprises from the first day of action.

Johnson and his fiancee, Paulina Gretzky, welcomed their second child, River Jones Johnson, into the world Monday, just three days before he teed off at Erin Hills.

Welcome to the world baby boy..we all love you so much River Jones Johnson 6/12/17 ??? @djohnsonpga

With that in mind, we can surely cut Johnson some slack for getting off to a rough start, shooting 75 to card a 3-over par first round at the U.S. Open.

Still, it’s a very frustrating start for the man who broke through with his first major last year. And given the low scoring we saw from much of the field (more on that later), he’ll be hard pressed to not only repeat but to make the cut at all.

As it stands, Johnson is 10 shots off the lead.

Notably, the long-hitting golfer went two-over par on the par-5 holes at Erin Hills. What should have been a huge advantage for Johnson ended up being a detriment.

What really did him in was a four-hole stretch between 14-17 in which he went double-bogey, bogey, birdie, bogey, starting with an errant shot off the tee on the par-5 14th. He’ll need to turn things around quickly on Friday to avoid a quick exit.

It’s not surprising that Fowler is in contention. While he’s had his fair share of struggles (he missed his last cut before this tournament, for instance), Fowler has been one of the hottest golfers in the world this season.

What is surprising is just how red hot Fowler was Thursday.

The 28-year-old bogeyed nary a hole, scoring seven birdies en route to an opening-round 65. Whereas Johnson failed to take advantage of the par-5 holes, Fowler went four-under par on these holes Thursday, greatly aiding his score.

The score of 7-under par was a new course record at Erin Hills. Additionally, his scorching day set another record, and one that could end up being a bit more historic, especially if he can continue his hot play.

.@RickieFowler's 7-under 65 tied the lowest first-round score in the #USOpen, in relation to par. pic.twitter.com/19AGOv3PjE

The past six major championships have all been won by first-time major winners. Fowler is gunning to become the seventh. With three more rounds like the one he put together Thursday, he’ll have a chance to make it happen.

Schauff-ling his way up the leader board.

A guy who spends most of his time on the European Tour, Fleetwood has either been red hot or has missed the cut altogether most weeks. He won the Abu Dhabi HSBC Championship in January and has four other top-three finishes over in Europe. But he has also missed four cuts. Fleetwood has shown up on the leaderboard a couple times on the PGA Tour as well back in March. But most recently he’s missed the cut in his last two tournaments — the Memorial Tournament and the BMW Championship.

Needless to say, it’s a bit shocking to see Fleetwood settled in underneath Fowler on the leaderboard. Schauffele’s inclusion on the leaderboard is even more shocking. He’s played in 17 events on the PGA Tour and has one top-10 finish compared to seven missed cuts.

Whether these guys can keep up this torrid play through three more rounds remains to be seen. But for at least one day, they were phenomenal.

Many favorites failing to take advantage of prime conditions

On a day in which so many guys were smoking hot, it really was stunning how poorly some of the top favorites fared.

Jordan Spieth, Jon Rahm, Hideki Matsuyama, Adam Scott, Dustin Johnson (covered earlier), Thomas Pieters, Jason Day and Rory McIlroy, (more on them in a bit) — all of these men were mentioned in some capacity as heavy favorites or dark horse candidates to win the 2017 U.S. Open. All of them failed to reach even par, with most falling well short of that mark.

Rahm’s reaction to the following shot sums up the mood of this normally stellar group, and he wasn’t the only player to vent frustration on the course Thursday.

By no means does it mean some of these men cannot come back tomorrow with strong rounds to make the cut. But they all have a steep uphill climb.

Wild drives, poor approach shots, less-than-crisp short games and weak putting doomed these top players to failure on Thursday. It’s going to be fascinating to see who has the grit and tenacity to scrap back tomorrow.

Jason Day and Rory McIlroy might already be out of tournament

Erin Hills wasn’t kind to Day or McIlroy on Thursday.

The Australian and one-time PGA Championship winner absolutely shot himself in the foot not once, but twice. For the first time in his career, Day posted two triple-bogeys in the same round.

Jason Day now 6 over(!) through 10 after another triple bogey and in the fescue on 11. This is getting ugly. https://t.co/4O1bXt6ASP pic.twitter.com/zeim9epXPi

After posting his second triple-bogey of the round, Day then bogeyed No. 11, falling all the way down to 7-over par on the day where he finished in a tie for 151st.

McIlroy also suffered many self-inflicted wounds. He couldn’t seem to stay out of the rough, and once you’re in there it’s tough to get out. All told, the young Northern Irishman posted four bogeys and two double-bogeys, along with one tremendous eagle for a 6-over par 78, tied for 145th place.

The 2017 season has been difficult for both of these players for different reasons. Day’s mother was diagnosed with lung cancer, and he hasn’t quite been himself for much of the year. McIlroy has been dealing with back and rib injuries and hasn’t played a lot.

That said, nobody expected these two top players to be out of the tournament after the first round. It’ll take a miracle for either of them to work their way back into it and make the cut.

One of the more heart-warming stories heading into the U.S. Open was that Davis Love III was caddying for his son, Davis Love IV (otherwise known as Dru Love), as he made his professional debut. Dru, who just finished at Alabama, made it to Erin Hills as an alternate having just found out about this development on Sunday, days before the championship.

Despite the daunting task of making his professional debut at the U.S. Open, the young man doesn’t lack confidence.

“I would say the only thing that’s holding me back is my lack of experience. I went to Alabama for five years and played one healthy season of golf,” Dru Love said, per Genaro C. Armas of the Associated Press. “My dad jokes that I’m 23 years old but I’m 19 in golf.”

Those 19 years of golf experience, along with his dad’s advice, helped Love register a 1-under-par round of 71 Thursday. This puts him within striking distance of the leaderboard and gives him a very strong chance of making it into the weekend.

All told, Love had four birdies and three bogeys. It was quite the impressive professional debut, and we look forward to seeing what the 23-year-old can do on Friday.

Ernie Els turns back the clock

Consider the clock turned back, at least for a day.

Twenty years ago, @TheBig_Easy made history for the second time when he lifted the #USOpen Trophy at Congressional. pic.twitter.com/Sx8572LMZr

Els put together a rock solid round of 70, good for 2-under par. His round would have been even better if not for a couple of mistakes on the final two holes, both of which resulted in disappointing bogeys for The Big Easy. Still, the end result is all that matters.

Making his performance all the more timely, Els’ five-year exemption into the U.S. Open from winning the 2012 British Open expires after this week. So, without a strong showing, he’ll have to qualify by other means, none of which he was able to do this year. So a strong start at Erin Hills is a good first step in ensuring that the 2017 U.S. Open is not the last for former champ.

If Els can continue playing strong Friday, he’ll be one of the more interesting players to track over the weekend.

Amateurs on the prowl

On a day in which so many to players struggled to even get to par, it was pretty stunning to see these amateurs posting scores such as these.

That said, when you consider Erin Hills is the longest course in U.S. Open history, the following stat helps you understand just how these young guns are scoring so well.

Given the fact that Erin Hills is going to continue getting rained on throughout the weekend, length and accuracy off the tee will continue to be a huge advantage. If these young guns can stay in the fairway and don’t succumb to pressure, they really could not only make the cut but make a charge up the leaderboard.

Thanks to some rain and very little wind early on Thursday,  many players were able to post some stunningly low scores for a U.S. Open.

Fowler’s 7-under 65 was the best opening-round score at the U.S. Open in relation to par since Jack Nicklaus and Tom Weiskopf shot 63s on the par-70 Baltusrol Golf Club back in 1980. Additionally a total of 42 players manage to shoot under par, a new record.

All time USOpen record so far 42 players under par. Most red rounds ever after one round pic.twitter.com/y0LioAc9hG

During the afternoon, the course dried out a bit as the wind kicked up, but then it died back down again and there were plenty of birdies to be had.

The USGA might be inclined to make some adjustments after seeing so many red numbers. This is a tournament that typically doesn’t see exceptionally low numbers, though the winning score the past few years has been under par.

It’s going to be interesting to see what, if any, changes are made as we head into the weekend.

The most shocking development Thursday had nothing to so with golf.

A blimp, which wasn’t affiliated with the U.S. Open or FOX Sports, crashed and burned, quite literally.

A manned blimp unaffiliated with FOX Sports or the #USOpen crashed near the course today. We will provide more details as they're available. pic.twitter.com/QEAk8tiU0K

The blimp pilot was injured in the crash, though thankfully nobody else was.

The Associated Press reported the blimp as being owned by “Florida-based AirSign,” and “was used for advertising as it floated above the golf tournament and had been airborne for several hours before it went down, authorities said.”

Given the end result being the blimp going up in flames, it’s quite fortunate the aircraft didn’t fall onto the course and into the crowds of people watching the U.S. Open.