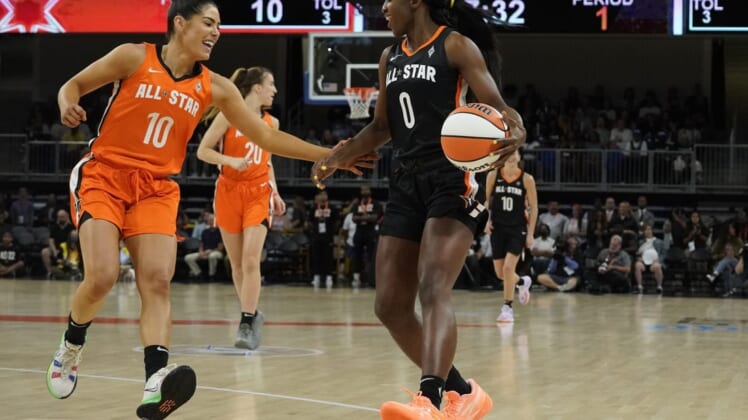 Plum connected on 12 of 18 field goal tries, including 5 of 11 from 3-point range, and added three assists to earn Most Valuable Player honors. The only other player to net 30 in an All-Star Game was Maya Moore, who did it in 2015.

She also set the record for most field goals made in a WNBA All-Star Game, besting the previous record of 11 shared by Shoni Schimmel (2014) and Nneka Ogwumike (2017).

Rhyne Howard (Atlanta) came off the bench to hit for 13, while Wilson, Dearica Hamby (Las Vegas) and Brionna Jones (Connecticut) each netted 10 points. Team Wilson hit 53.1 percent from the field and collected 37 assists on 51 made buckets.

Connecticut’s Jonquel Jones starred for Team Stewart with 29 points and 13 rebounds, including the first 4-point shot less than three minutes into the game. Jewell Loyd (Seattle) scored 21 points, all on 3-pointers, while Stewart added 14.

Nneka Ogwumike (Los Angeles) hit for 12 points and Arike Ogunbowale (Dallas) tallied 11, but their efforts went for naught. Team Stewart made only 42.9 percent of its field goals and connected on just 18 of its 60 3-point attempts.

Sylvia Fowles (Minnesota) and Sue Bird (Seattle) played their final All-Star games before their planned retirements at season’s end. Fowles started the scoring with a 3-pointer and punctuated Team Wilson’s 36-11 second quarter output with a steal and dunk that electrified the crowd of 9,572 at Wintrust Arena.

Team Wilson took a 59-39 lead to the half and kept Team Stewart at bay with 75 second half points. Stewart’s layup pulled her team within 112-105 with 3:50 left, but Plum and Parker led a 10-2 spurt that was punctuated by an Ionescu 3-pointer to quash any thoughts of a comeback win.