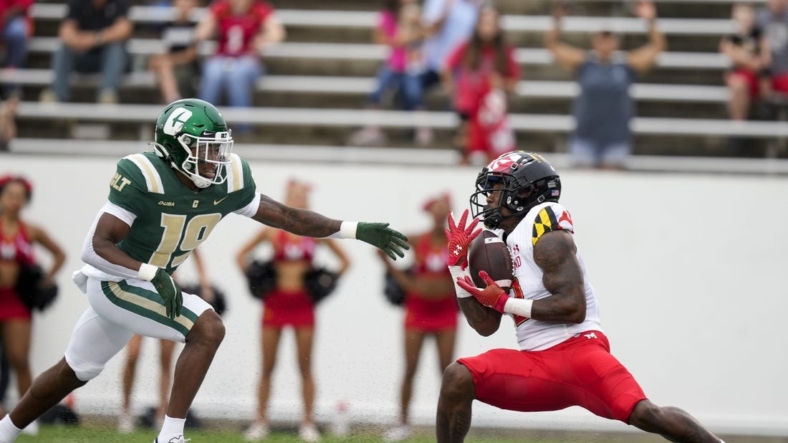 Taulia Tagovailoa threw for 391 yards and four first-half touchdowns and added a touchdown run in the second half as Maryland cruised to a 56-21 victory over host Charlotte on Saturday.

Tagovailoa, who finished 27-of-31 passing with an interception, threw scoring passes of 39, 14, 45 and 16 yards in the first half for the Terrapins (2-0). While his four touchdown passes were a career best, his 391 passing yards were three shy of his career high, which he set against Minnesota in 2020.

Colby McDonald rushed for a team-high 61 yards, including a 49-yard touchdown run, on four carries and Antwain Littleton took his lone carry 59 yards for a touchdown for the Terrapins.

After Maryland took a 7-0 on its first possession on Tagovailoa’s 39-yard touchdown pass to Copeland less than two minutes into the game, Charlotte (0-3) responded with Xavier Williams’ 28-yard scoring toss to Grant DuBose with 5:58 left in the first quarter.

Maryland took the lead for good on Tagovailoa’s 14-yard touchdown pass to Jones just 30 seconds later before Littleton pushed the lead to 21-7 with a 59-yard touchdown run with 1:16 left in the opening quarter.

After Charlotte pulled to within 21-14 on Williams’ 19-yard pass to Victor Tucker just 35 second into the second quarter, Maryland countered with Tagovailoa’s 45-yard touchdown pass to Copeland to make it 28-14 just 90 seconds later.

Tagovailoa threw his fourth touchdown of the first half when he hit Jones on a 16-yard strike for a 35-14 lead with 4:47 left in the second quarter.

Tagovailoa finished the first half 20-of-22 passing for 305 yards with four touchdowns and an interception before adding a 4-yard touchdown run that gave the Terrapins a 42-14 lead with 6:48 left in the third quarter.

McDonald’s 49-yard run made it 49-14 with 3:48 before backup quarterback Billy Edwards Jr. threw a 17-yard touchdown pass to Octavian Smith in the fourth quarter.