Tannehill and Titans Present Big Challenge for Raiders at Home 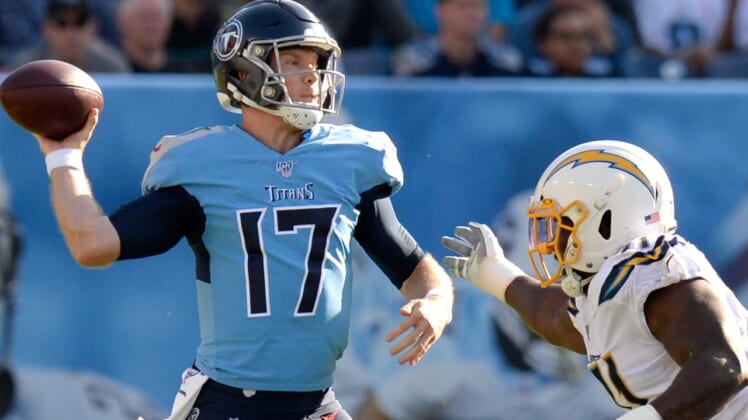 The 7-5 Titans roll into Oakland surging since benching Marcus Mariota thanks to a rejuvenated Tannehill.

As the Raiders found out during their roller coaster 2019 season, there are no pushovers in the NFL. That includes Titans quarterback Ryan Tannehill who visits Oakland with a 5-1 record since being named the team’s starter six games into the season.

Coming home after losing two straight on the road, Oakland now has the challenge of facing a resurgent Titans team who owns second place in the AFC South. Much of the Titans resurgence has occurred when the team switched starting quarterbacks.

Since benching the 2015 first-round draft pick Marcus Mariota, the Titans are 5-1 under Tannehill and are scoring points at a feverish pace. They’re scoring an average of 13.4 more points per game since benching their former starter.

With Tannehill under center, the Titans are scoring an average of 29.7 points per game over the last six games, have posted a quarterback rating of 117.2 – trailing only the Baltimore Ravens in both categories over that span.

To Tannehill, the newfound success in Tennessee can be boiled down to one thing: hard work.

With Tannehill under center, the Titans are scoring an average of 29.7 points per game over the last six games, have posted a quarterback rating of 117.2 – trailing only the Baltimore Ravens in both categories over that span.

“For me, it’s a head-down process of taking advantage of the week,” Tannehill told Titans.com. “I’ve seen how this thing goes, the waves, the ins and outs of the season. So if you start taking a step back at this point, then you’re doing a disservice to your teammates and to yourself of opportunities you could take advantage of this week.”

Tannehill now ranks as the top-rated passer in the NFL at 113.9 despite only starting six games in 2019. Tannehill has also registered two games with a passer rating over 120 – only the Seahawks Russell Wilson and Vikings Kirk Cousins have done it more at five times each.

Fresh off a huge come-from-behind win against division foe Indianapolis last week, the Titans and Tannehill now get to face the NFL’s fifth-worst passing defense in the Raiders who are yielding an average 27 points per game.

For the Raiders to beat Tennessee – even at home with the significant Raider Nation home-field advantage – they’re going to have to put up points on offense. Oakland ranks in the Top 10 in overall offense (10) but just 23rd in scoring at 19.8 points per game.

“You know, but he’s never had the accolades and things like that,” Raiders quarterback Derek Carr said of Tannehill. “You know, that people would talk about on TV and things like that but it’s no surprise to people that watch the film and compete against him, they’re like ‘oh yeah he’s having a great year ‘ – they got a great team.”

The defense for Tennessee isn’t in the Top 10 – in fact it trails the Raiders by one spot (21) overall but surrenders just 19.5 points per game. The Titan’s defense has made significant strides in almost every category this season and has surely benefited from the offensive explosion led by Tannehill.

“They’re really good both sides of the football,” Carr added.

While Raiders fans are excited to get their team home and feel as though the team is invincible in Oakland (5-1 at the Coliseum), the Titans are no pushover and will give Jon Gruden’s team everything they can.

The Raiders will have to score on offense and do it early As our friend Vic Tafur of The Athletic explained in his most recent column, the Raiders are not “built for comebacks.” Tafur points out the team’s point differential of -87 and that they either win close games or get blown out – there’s no in-between.

Yes, the Raiders have been very good at home this year. But taking the Titans lightly isn’t an option as the Raiders have zero margin for error to keep their slim wild-card playoff hopes alive.