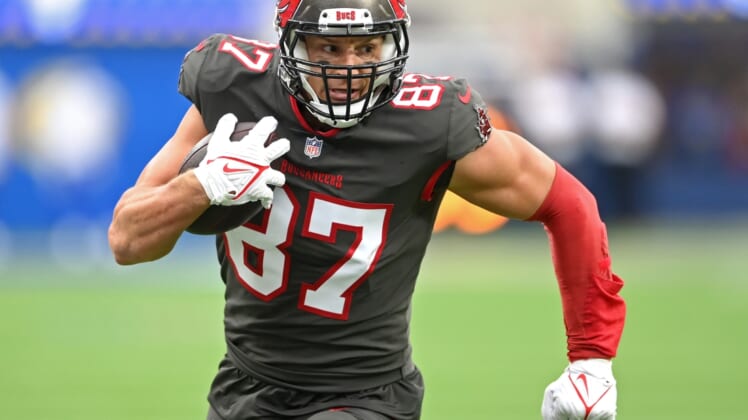 Sep 26, 2021; Inglewood, California, USA; Tampa Bay Buccaneers tight end Rob Gronkowski (87) completes a pass play and runs for a first down in the first half of the game against the Los Angeles Rams at SoFi Stadium. Mandatory Credit: Jayne Kamin-Oncea-USA TODAY Sports

Tampa Bay Buccaneers tight end Rob Gronkowski will not make the trip to New England for Sunday night’s reunion with the Patriots due to a rib injury, ESPN reported Saturday.

Gronkowski was injured during the Buccaneers’ 34-24 loss to the Los Angeles Rams last Sunday. He did not practice Wednesday or Thursday before reportedly making an appearance at practice Friday.

Sunday would have been Gronkowski’s first game against the Patriots since he left the team following the 2018 postseason. He retired that offseason, only to return to the NFL after Tom Brady joined the Buccaneers in 2020.

Gronkowski, 32, has collected 16 receptions for 184 yards and four touchdowns this season.

The five-time Pro Bowl selection won three Super Bowls with the Patriots during his nine seasons in New England. He added his fourth Super Bowl title with the Bucs last season.