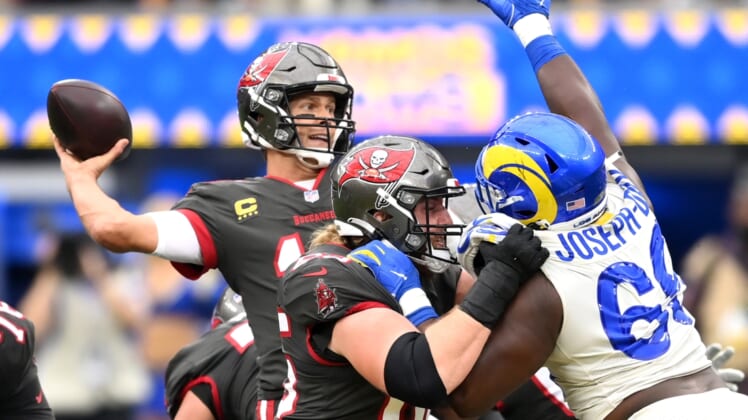 Matthew Stafford threw for four scores as the Los Angeles Rams improved to 3-0 with a 34-24 win over the visiting Tampa Bay Buccaneers at SoFI Stadium on Sunday.

Stafford continued to play well for the Rams since joining Los Angeles in an offseason trade, completing 27 of 38 passes for 343 yards. Stafford’s favorite target was Cooper Kupp, who finished with nine receptions for 96 yards and two scores on 12 targets.

DeSean Jackson added three receptions for 120 yards, including his first touchdown as a Ram – a 75-yard score.

Darrell Henderson Jr. did not play because of a rib issue. However, recent addition Sony Michel served as the primary running back in his place, posting 67 rushing yards on 20 carries.

Tom Brady finished 41 of 55 for 432 yards, with one touchdown and no interceptions. Sunday’s contest marked the first time Brady played in Los Angeles since the 1998 Rose Bowl as a backup quarterback for the University of Michigan.

But in this one, the Bucs (2-1) had trouble running the football, totaling just 35 yards on the ground, as the defending Super Bowl champs suffered their first loss of the season.

After a scoreless first quarter, the Rams got on the scoreboard first with tight end Tyler Higbee scoring on a 6-yard screen pass, giving Los Angeles a 7-0 lead at the 12:22 mark of the second quarter. Matthew Stafford went 8-for-8 on the 14-play, 95-yard scoring drive that took over eight minutes.

The Bucs responded with a 15-play, 76-yard drive capped by a Chris Godwin 2-yard run with 4:03 left in the first half, tying the score at 7-all.

On the ensuing drive, the Rams retook the lead on a 2-yard pass from Stafford to Kupp, putting L.A. up 14-7 at halftime. Rams coach Sean McVay improved to 40-0 when holding a lead at halftime.

The Rams pushed their lead to 21-7 on a 75-yard Stafford deep ball to Jackson on the opening drive of the second half.

The Bucs answered with a nine-play, 75-yard drive, capped by a Brady 1-yard plunge for a score, cutting L.A.’s advantage to 21-14.

However, L.A. took control of the game again with a Kupp 10-yard scoring reception and a Matt Gay 48-yard field goal, putting the hosts ahead 31-14.

Tampa Bay answered with a Ryan Succup 26-yard field goal to trim L.A.’s edge to 31-17 and completed the scoring on a Brady-to-Giovani Bernard touchdown pass with 1:10 left in the game.

The Bucs were without Antonio Brown because he was on the reserve/COVID-19 list. Tight Rob Gronkowski appeared to suffer a rib injury early in the third quarter after a hit from linebacker Terrell Lewis.

Gronkowski went to the medical tent and then the locker room for further evaluation. He later returned to the game, finishing with four receptions for 55 yards.