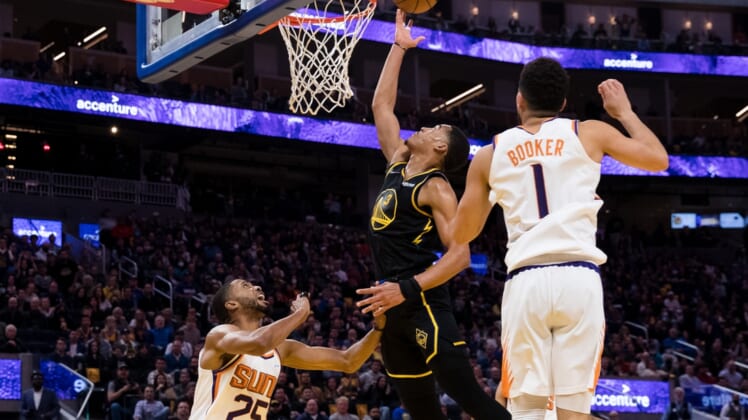 Chris Paul hit the game’s final two baskets 1:24 apart, including a clutch runner in the lane with 13.1 seconds remaining, as the Phoenix Suns survived a foul-filled finish to equal their single-season franchise record for wins with a 107-103 victory over the Golden State Warriors on Wednesday night in San Francisco.

Jordan Poole tied his career-high, set last May against the New Orleans Pelicans, with a game-high 38 points for the Warriors (48-29), who dropped into a tie for third place in the Western Conference with the Dallas Mavericks by virtue of a fourth straight loss.

Paul’s difference-making hoop came after Golden State’s Draymond Green was called for traveling with his team down 102-101 with 31.2 seconds remaining.

Down three in the final seconds, the Warriors had two subsequent possessions, but the Suns elected to intentionally foul Green on the first one, resulting in two free throws as Phoenix retained a 104-103 lead with 12.4 seconds left.

After Paul hit two foul shots to regain the three-point edge with 7.7 seconds to go, Poole misfired on a half-court shot that could have forced overtime.

Booker’s 22 points came despite 5-for-21 shooting. The Suns overcame 25.0 percent shooting on 3-pointers to win their ninth straight.

Deandre Ayton chipped in with a 16-point, 16-rebound double-double for Phoenix, Paul finished with 15 points and a game-high eight assists, and Jae Crowder added 10 points to the cause.

Andrew Wiggins backed Poole with 19 points for the Warriors, who played once again without injured star Stephen Curry.