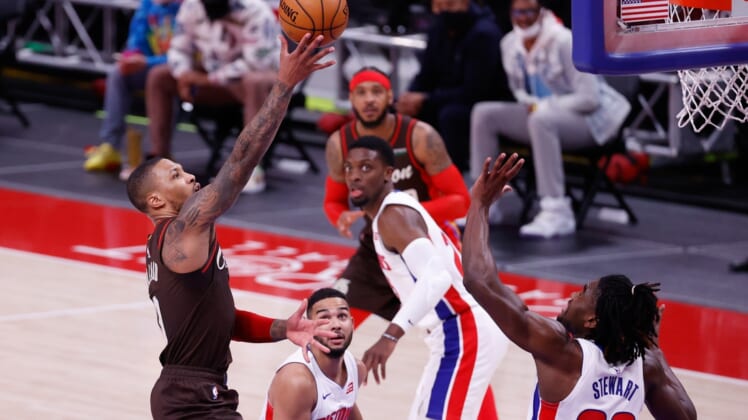 The Milwaukee Bucks look to continue their dominance over Portland when they visit the Trail Blazers on Friday night.

Milwaukee will be looking for its fifth straight win and ninth of 10 in a series that they have controlled in recent seasons.

The Bucks pounded Portland 134-106 on Feb. 1 in Milwaukee in a game in which they scored 113 points in the first three quarters before calling off the assault.

They arrive in Portland to see a squad that just completed a 4-0 road trip.

The Trail Blazers won three single-digit games in Florida against the Miami Heat, Orlando Magic and Toronto Raptors (playing in Tampa) before delivering a 124-101 trouncing of the Detroit Pistons on Wednesday night.

Damian Lillard led the way with 33 points and 10 assists, as Portland put the Pistons away with a 73-point second half.

“Teams always have a lot of energy at the start of games, but that doesn’t always translate to the second half,” Lillard said. “Right now, stepping it up in the third quarter of games is our specialty and we have to keep doing that.”

Lillard was 5-for-7 from 3-point range and has scored 30 or more points in seven of the past 12 games.

Sidekick CJ McCollum is also playing well and had 24 points and eight assists against the Pistons. McCollum has topped 20 in four straight games and is averaging 26 points and 6.5 assists during the stretch.

McCollum was sidelined with a fractured foot when the Bucks pulverized Portland two months ago.

The services of two-time reigning NBA MVP Giannis Antetokounmpo were only needed for 26 minutes in that contest. He had 18 points on 8-of-11 shooting.

Holiday also was a force on Wednesday night as Milwaukee halted a three-game slide with a 112-97 road win over the Los Angeles Lakers.

“He was aggressive, getting to good spots and finishing around the basket,” Bucks coach Mike Budenholzer said. “It was good to see him play well and we want to continue to push him to be aggressive.”

Antetokounmpo contributed 25 points, 10 rebounds and three blocked shots as Milwaukee made 14 of 26 3-point attempts while holding the Lakers to 10 of 36 from behind the arc.

The solid effort was welcome after Milwaukee was clobbered 129-105 by the Los Angeles Clippers on Monday.

“We needed to be a lot better,” Budenholzer said. “There are always areas where we can be better and get sharper. But we needed to have a game like this.”

The stop in Portland is the third of a six-game road trip for the Bucks.

Meanwhile, the Trail Blazers have won seven of their past nine games after putting together the unbeaten road trip.

Portland averaged 120.8 points in the four wins and coach Terry Stotts was happy to see his team keep its focus against the Pistons.

“It is always tough to win games on the road in this league, and that’s especially true in these circumstances,” Stotts said. “We had a 3-0 trip earlier in this season, and we thought these were four winnable games.

“But this was the last game of a road trip against a team with a poor record, so we could have overlooked it. That didn’t happen.”