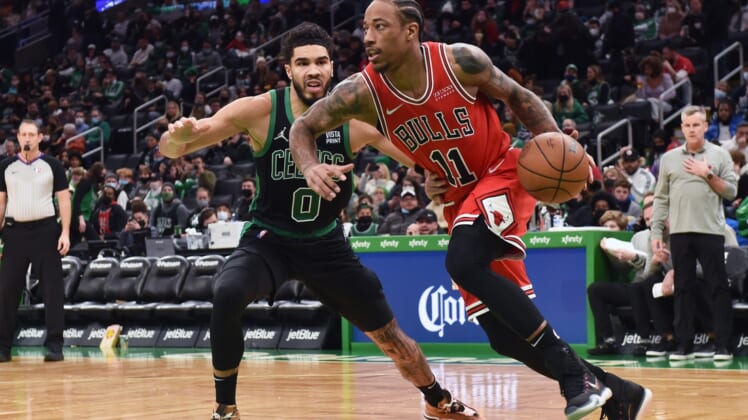 The Boston Celtics will attempt to continue their winning ways on Wednesday when they open a three-game, season-ending road trip against the Chicago Bulls.

Jaylen Brown scored 32 points and Jayson Tatum added 22 as the Celtics (49-30) recorded their 13th victory in their past 16 games with an emphatic 144-102 romp over the Washington Wizards on Sunday.

The hot streak has propelled the Celtics into a tie for second with the Philadelphia 76ers and Milwaukee Bucks, 2 1/2 games behind the first-place Miami Heat in the Eastern Conference. Boston could find itself as high as first place or as low as fifth place when the dust settles.

First things first, however, for Celtics coach Ime Udoka, who is toying with several lineup decisions ahead of the Wednesday game against the sixth-place Bulls (45-34). Boston will complete a back-to-back set with a game against the Milwaukee Bucks on Thursday.

“A lot of it obviously has to do with seeding and standings and kind of what happens as far as that,” Udoka said. “We’re going one by one, honestly, and start with Chicago. Based on results and whatever else happens around us, it’s a back-to-back, so we’re just taking it (to) Chicago first and then figuring it out down the line.

“And, obviously, it has to do with opponents and what they end up doing as well. But the health and playing well are the keys and then seeding and standings and everything that you can’t really kind of determine will play into it afterwards.”

With that in mind, the Celtics released a packed injury report on Tuesday.

While Brown (knee), Tatum (knee) and Al Horford (back) are considered probable, Juwan Morgan (health and safety protocol) and Nik Stauskas (ankle) have been ruled out for the contest.

Chicago’s Zach LaVine is expected to return after sitting out the team’s 127-106 home loss to the Bucks on Tuesday. The Bulls have been managing LaVine’s knee injury for the past several weeks, notably on back-to-back sets.

DeMar DeRozan scored 40 points to pace the Bulls, who clinched a playoff berth when the Cleveland Cavaliers fell to the Orlando Magic earlier on Tuesday. Chicago resides one game behind fifth-place Toronto, but the Bulls own the tiebreaker over the Raptors.

Multiple media outlets reported that Chicago guard Lonzo Ball sustained another setback in the rehabilitation of his left knee, possibly knocking him out for the remainder of the season. Ball last played on Jan. 14.

“I would imagine in the next day or two we’ll probably have a little bit more once everybody sits down and talks,” Bulls coach Billy Donovan said. “It’s disappointing from the standpoint you were hoping that the time he had off would help maybe propel him going forward to do a little bit more. But that certainly hasn’t been the case.”