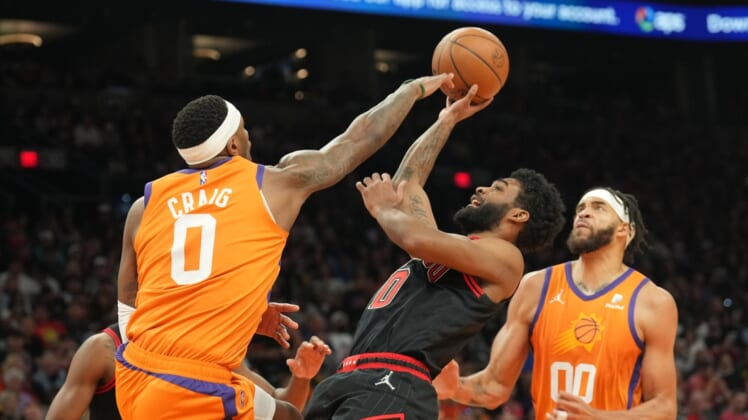 Devin Booker scored 28 points to help the Phoenix Suns cruise to a 129-102 victory over the visiting Chicago Bulls on Friday night.

Deandre Ayton recorded 20 points and 12 rebounds as NBA-best Phoenix (57-14) won for the eighth time in the past 10 games. The Suns have averaged 132.3 points while winning their past four games by an average of 22.3 points.

Cameron Payne contributed 15 points and seven assists as Phoenix led by as many as 33 points while defeating Chicago for the fifth straight time.

Torrey Craig had 14 points and nine rebounds and was 5 of 5 from the field. He has made all 13 of his attempts while starting the past two games.

DeMar DeRozan scored 19 points and Nikola Vucevic added 16 as Chicago (41-29) lost for the eighth time in the past 10 games. Coby White tallied 14 points and Zach LaVine had 12 points and nine assists but was just 1-of-7 shooting.

Tristan Thompson added 11 points for the Bulls, who shot 41.2 percent and were 7 of 27 from behind the arc.

Phoenix connected on 56 percent of its field-goal attempts, including 11 of 25 from 3-point range. The Suns held a 49-37 rebounding edge.

Booker scored 20 points as the Suns built a 61-48 lead at halftime.

Chicago trailed 40-36 after White drained a 3-pointer with 7:15 left in the half. Phoenix answered with a 12-4 run and eventually led by 14 prior to taking the 13-point advantage into halftime.

The Suns built on to the lead by scoring 11 of the first 15 points in the third quarter to stretch the lead to 20. Nearly six minutes later, Shamet buried a 3-pointer to push the lead to 88-64.

The Suns further widened their lead from there as they close in on the fourth 60-win season in franchise history.